Virgin Voyages has released a first-look video rendering of Beach Club at Bimini, a private retreat for its cruise guests.

Set to open in April 2020, the getaway was built on the seven-mile island of Bimini, just a short transfer away from the pier.

Created in partnership with Resorts World Bimini, Miami-based architects EOA, Inc. led the design, featuring natural materials and soft earth tones. The Beach Club will overlook the ocean with an expansive lagoon-style pool as the central anchor of the club.

Mornings at The Beach Club at Bimini will begin with yoga and meditation; and by the afternoon, DJ-led pool and flotilla parties will be the center of attention. Grammy Award-winning artist and producer Mark Ronson was named founding DJ, where he will have four performances in 2020, with specific performance dates to be announced soon. 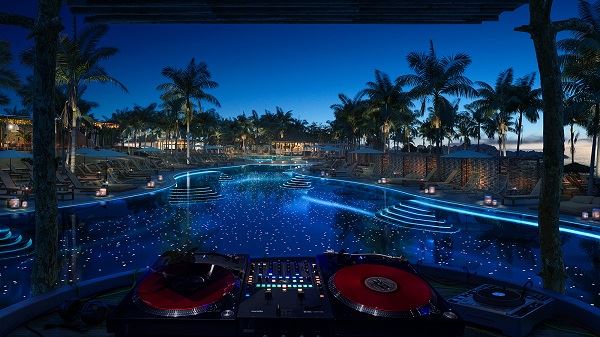 The expansive pool features a DJ booth for pool parties.

Other spaces at the property include social areas with hammock groves and six bars. The Beach Club at Bimini will also feature active areas for watersports and beach play. There will be beach loungers, and beachside and poolside cabanas available for rent.

Guests staying in RockStar Suites will have their own exclusive enclave, with a dedicated bar, complimentary food service, an outdoor terrace lounge, and sun loungers and beach cabanas. 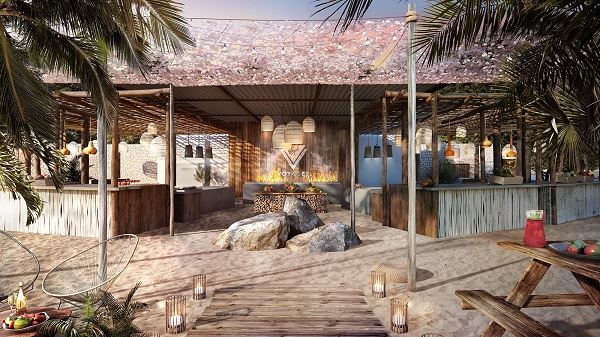 With its inaugural season scheduled for 2020, Virgin Voyages’ first ship, the Scarlet Lady, will sail from Miami to the Caribbean in 2020, hosting more than 2,770 sailors.

Virgin Voyages has been lauded for not featuring any non-commissionable fares (NCFs) for its travel advisor partners, or First Mates, as part of its outreach that it is calling “An Epic Sea Change.” All of Virgin’s fares, starting with the cruise fare to add-ons like flights, hotel stays, insurance, shore excursions, spa packages, onboard credits, basic beverage packages, fitness classes, and taxes and fees, will be commissionable at 10% for its advisors.

To learn more about the brand, advisors can register with the line’s agent portal at FirstMates.com. Virgin also created SeaCiety, a closed Facebook group for its partners. In the SeaCiety group, Virgin will measure an advisor’s engagement and sales with a private metric called the "SeaQ." Virgin will use that score to determine which advisors can get onboard Scarlet Lady during its pre-inaugural events before its 2020 debut.