The 28-passenger Zambezi Queen acts as a floating lodge for safari expeditions.

African land safaris remain some of the most popular and highly desired trips for high-end travelers. But back in 2011 AmaWaterways introduced a new form of safari on the river in its programs using a chartered boat named the Zambezi Queen.

No other similar river safaris exist in Africa, though other operators do charter the vessel as well. But Zambezi Queen offers one of the most comfortable and scenic ways to experience a safari on the water, or any safari for that matter.

Despite its name, the 28-passenger Zambezi Queen cruises not on the Zambezi River but on the Chobe, the river located on the border between Namibia and Botswana. The boat offers not a traditional river cruise stopping at multiple ports, but serves as a floating safari lodge from which guests venture out on daily excursions.  There’s also a two-night excursion and hotel stay in Victoria Falls, Zimbabwe, as well as optional land extensions to South Africa or Tanzania.

Unlike traditional European river cruise vessels, Zambezi Queen anchors in only two spots and sails roughly 25 kilometers up and down the Chobe. Guests go out daily in two high-speed tenders that can each carry up to 18 to see the wildlife.

The giant Chobe National Park, located in Botswana, has one of the largest elephant populations in Africa at roughly 120,000. One of the reasons for that is that Botswana authorizes its military to shoot poachers on sight. Not surprisingly that means AmaWaterways guests get to see up close a large number of elephants, along with many giraffe and pods of hippos, all of which feed and drink along the riverbank. There are also buffalo, impalas, baboons, crocodiles, wart hogs and many species of rare birds. There is even the occasional lion or leopard, though these are much harder to spot. 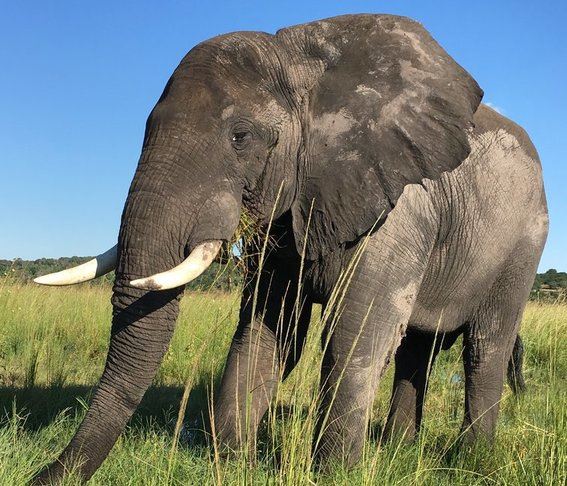 Zambezi Queen’s tenders take guests up close to the elephants.

Public Areas
Zambezi Queen is a three-deck vessel with the top deck featuring patio with small pool in the bow; a lounge, bar and small library; a dining room and rear patio deck. It’s basically the social hub of the vessel where you can have a drink (wine, beer and local spirits are included), read a book, play a game, or gaze at the scenery and animals along the river through floor to ceiling windows that slide open to make virtually the entire deck into a viewing platform. The first deck serves as the boarding area for guests, as well as where they can get on the tenders every day. It also has a small gift shop selling sundries and souvenirs.

Accommodations
There are 10 staterooms located on second deck, while the first deck has four staterooms. There are three categories, ranging from 215 square feet to 235 square feet to 300 square feet. Each stateroom has well-appointed accommodations the size of a hotel room, including a good-sized bathroom, king size bed (facing a floor to ceiling window), two bed tables, reading lights, chair, small closet, and wooden floors. Décor is photos of elephants and giraffe, as well as modern art renderings of zebra.

The four largest master staterooms, located toward the bow on the first and second decks, also have balconies with private sitting areas, while the staterooms in the next two categories down have private balconies. There are no stateroom keys (rooms stay unlocked), but there is a safe in every room with combo lock. Every room has its own air conditioning unit and the free Internet works surprisingly well.

Dining
Guests eat breakfast, lunch and dinner in the dining area located on the third (top) deck at tables for four and six with no assigned seating. A local chef produces daily fare with African influenced cuisine that is tasty and very good. Dinner features different soups, salads, fish, chicken and beef, and vegetarian options. Wine, beer, water and sodas are all included, as well as local spirits.

There’s even a final night on the boat where the entire meal is locally sourced Southern Africa cuisine and the crew provides entertainment and works to get guests into the act.  Before and sometimes after most dinners, guests are treated to short lectures on wildlife and the region, as well as readings of literature and poetry about Southern Africa courtesy of the tour guide and the cruise hosts.

Crew
Unlike other river cruise vessels that stop at multiple ports, most of crew aboard Zambezi Queen live in a nearby village and return there every night. On this cruise the tour guide, who stays onboard for the entire cruise and accompanies guests to Victoria Falls, was an experienced safari expert from South Africa named Kirsten Keun, who also happens to specialize in bird watching so he can help you identify nearly every one of the 450 species on the river.

Two young couples from South Africa also serve as hosts and manage the entire cruise experience for guests. Tender drivers are locals who know the river and are great at spotting wildlife. Housekeepers, bar tenders and kitchen staff, all of whom also are from the local village, are very friendly and accommodating. The crew even arranged a quick visit to a local bush bar on the river in Kasane, which wasn’t on the printed itinerary.

Itinerary
Zambezi Queen offers four nights on the river, including a one-day land safari in Chobe National Park, where guests riding nine-passenger safari vehicles furnished by Kalahari Tours can see animals up close and search for lions, and also have a picnic lunch in the park. Every day on the water there are at least two opportunities to take the tenders out to get close to the animals and birds along the river. On this cruise there were two extra excursions to go bird watching early in the morning. On one excursion, the tenders took guests to the small village of Ijambwe (population 85) in Botswana to meet locals and see how they live.

AmaWaterways offers four different packages so guests can immerse themselves in Africa and the safari experience. The nine- to 11-night “Discover Africa” includes three nights in Cape Town, followed by the four-night river cruise safari and two-nights in Victoria Falls at the colonial style five-star Victoria Falls hotel, complete with a full tour of the falls and a local elephant camp. There’s also an option to extend for two nights in Johannesburg.

Getting there
From New York JFK, you can fly direct to Johannesburg on South African Airways a 14.5-hour flight, then transfer to South African Airlink small jet for a 1.5 hour flight to a small, primitive airport in Kasane, Botswana. From there, a small bus takes you to a tender that motors out to the Zambezi Queen by about 3 p.m.

Guests get a safety briefing plus recommendations on what to bring on safari: water (stay hydrated), sunblock, bug spray, sun glasses, a hat, camera with good lense, and a good set of binoculars. On this particular sailing, the weather was quite mild, even a bit chilly in the early morning.

Related Articles
How to Close More Sales With New-to-River-Cruise Clients
Choosing Between Permanent & Mobile Safari Camps in the Serengeti
Water Levels on the Rhine Are Expected to Reach Critical Levels This Week
African Travel Offering Extra Commission for Group Bookings This Year
4 Things to Know When Booking a Serengeti Safari for Your Clients
River Cruise Lines Prepare to Deal with Low Water Levels on the Rhine
How the COVID-19 Pandemic Changed Safari Bookings
AmaWaterways Adds Second River Cruise Ship to Egypt
Flavours for Foodies: A Culinary Guide to European River Cruises
The Travel Institute Is Offering Bonus Commissions on AmaWaterways Bookings

The cruise line is one of the first to follow suit after NCL's move to eliminate most NCFs.

Muskat has more than 25 years of experience in the cruise industry.