This July 4, Cunard marks the 180th anniversary of its very first sailing, a transatlantic crossing from Liverpool to Boston onboard a ship called Britannia.

The line is celebrating this milestone at a time when no ships are sailing and cruise lines worldwide grapple with a global pandemic – but for Cunard, who has survived through two world wars, international incidents, previous pandemics, and more, making it through periods of uncertainty is nothing new.

“Cunard is a heritage brand, a global luxury brand, and one of the few travel companies that is able to call itself that,” Steve Smotrys, vice president of sales for Cunard North America, told Travel Market Report. “Those kind of brands do resonate with people. If you’re thinking about a Rolls Royce or Mercedes or something like that, people know those brands and hold them in high esteem. Cunard is one of the rare brands that has that type of rich legacy.”

Cunard’s philosophy of not only surviving a moment, but being part of it, has allowed it to thrive during three different centuries. Since its debut in 1840, the brand has not only persevered, but connected itself to major moments in history.

The sinking of the Lusitania, a British passenger ship that was launched in 1906 by Cunard, by a German U-Boat in 1915 was one of the causes that pulled the United States into entering the First World War.

During prohibition, Cunard became the operator of one of the first-ever “booze cruises”—the line would sail itineraries from New York to Cuba and Rio de Janeiro with guests onboard Berengaria enjoying libations from the longest bar at sea once in international waters.

During World War II, Queen Mary was painted completely grey and used as a troop transport ship bringing soldiers back and forth during the war, and Queen Elizabeth 2 did the same for the British government during the Falkland Wars.

Cunard’s Carpathia, which sailed in the early 20th century would help rescue 705 survivors from the lifeboats of the Titanic when the ship sank in 1912. The Titanic’s parent company, White Star Line, would later merge with Cunard in 1933. Cunard’s signature service, which it calls White Star Service™, is one of the last remaining artifacts of White Star and the Titanic.

Both Charles Dickens and Mark Twain sailed on Cunard—Dickens, onboard Britannia in July 1842, wrote about a drunk chef, seasick crew, and a captain who “never goes to bed, and is never out of humor,” in his travelogue American Notes, which detailed his trip to North America. 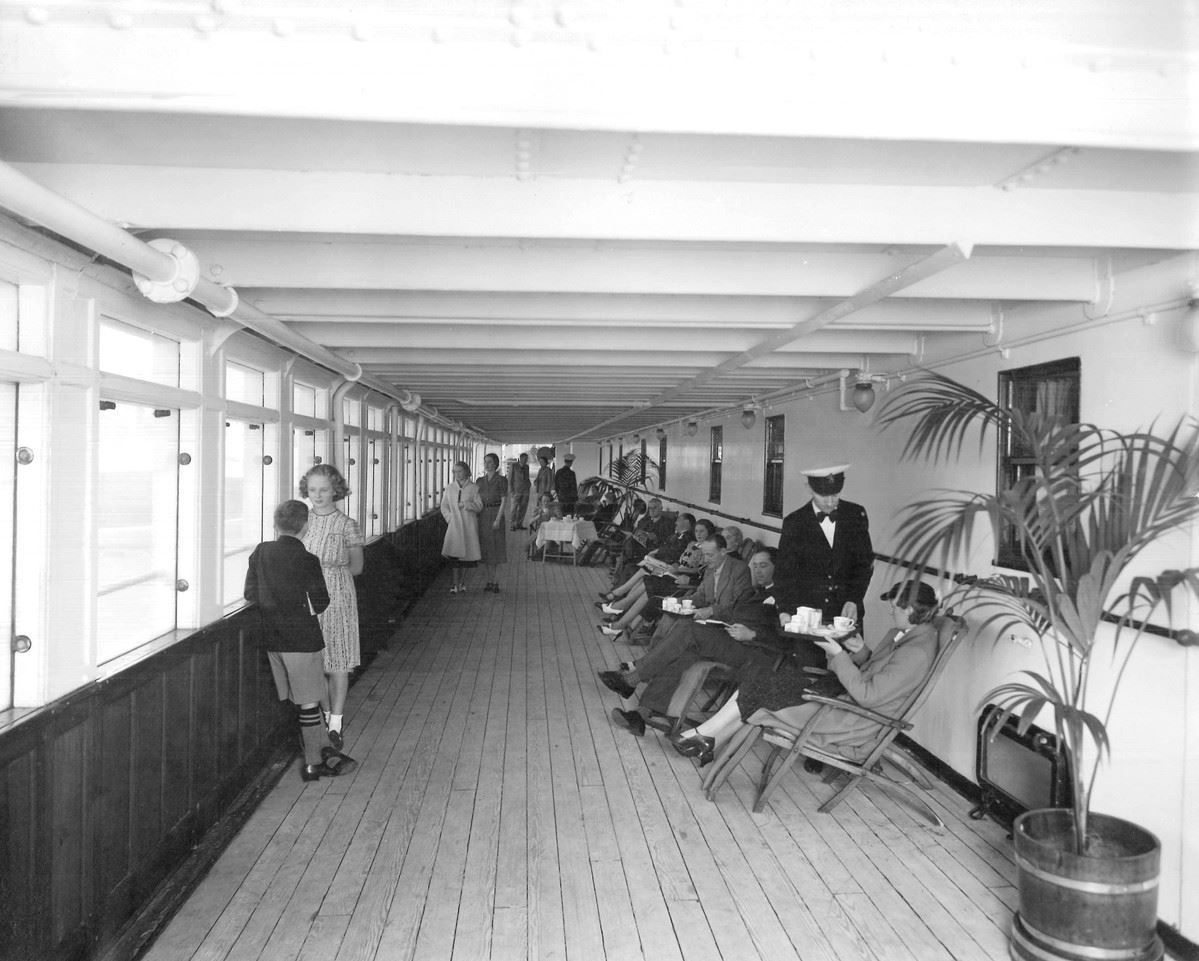 The outside deck on Laconia. Photo: Cunard.

Cunard is credited with sailing the first ever world cruise in 1922 on a ship called Laconia (Cunard still sails its world cruises today and will celebrate its world cruise centennial in 2022 with new itineraries) and sailing with so many other “firsts” at sea including the first children’s play area, first pianos, libraries, refrigerators, en suite bathrooms, suites, planetarium, televisions, and more.

It’s also largely credited with helping facilitate the massive immigration movement to the Americas. An estimated 2.5 million people have immigrated to America on a Cunard ship, according to the line, and even as far back as the 1830s, Cunard was moving people from Europe to Boston, helping the city’s population soar to 39,000 by 1840.

Cunard’s guests throughout its history have included countless members of the British Royal family; American presidents including George W. Bush; musicians such as David Bowie, Robert Smith, and Mick Jagger; and actors and actresses including Bob Hope, Meryl Streep, and more.

Now, as the world looks toward reopening, Cunard is preparing to mark a new post-COVID-19 era for the cruise line. Part of that is carrying on with Cunard’s legacy, but also making sure that new sailings are marked with the modern touches that cruise guests have come to expect.

Today, Cunard is sailing a modern fleet with iconic names including Queen Victoria, Queen Elizabeth and Queen Mary 2, the line’s flagship and only ocean liner carrying passengers today. The Cunard Queens regularly rank as the top ocean cruise fleet in the world by Travel+Leisure, including topping the list in 2018. 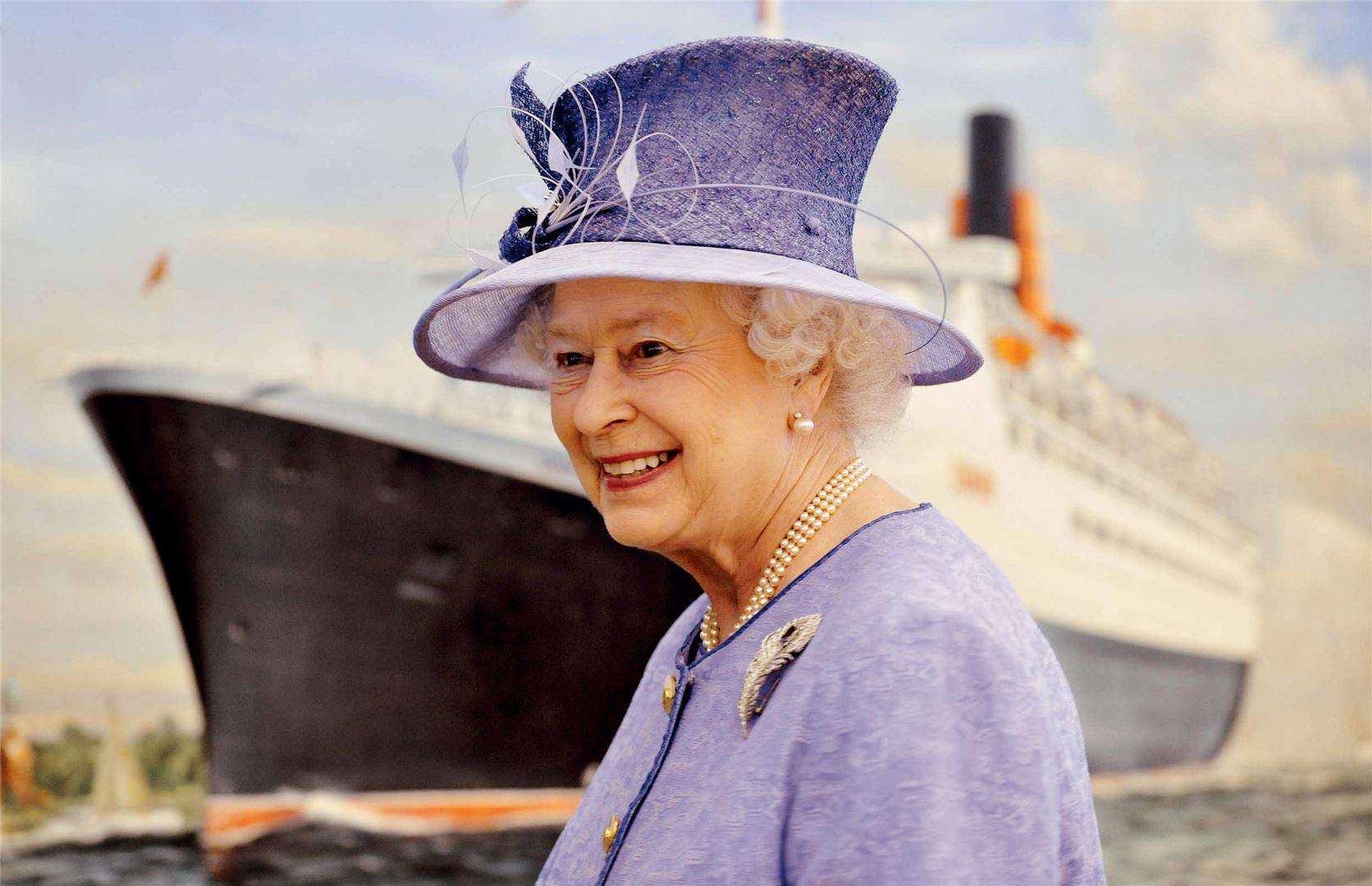 “It’s the name that everyone knows,” Smotrys said. “Sometimes the legacy of grandeur carries a perception of being too formal and stuffy. That’s not the reality.” It’s actually a relaxed cruise experience with flexibility. During the day it is completely casual. In the evening, there is a sense of celebration in the air. A few nights of every voyage include our popular Gala nights with themes like masquerade Ball. Other nights are more relaxed dress and every night has casual options throughout the ship. What makes Cunard stand out is its unique onboard experience that provides guests an amazing breadth of entertainment onboard. Cunard is about the feeling you get onboard. It feels like another world, yet also as welcoming as home. It is a combination of comfort, courtesy and everything being just the way you like. You can feel it in the way you relax the moment you step on board.

Looking forward
Cunard operations are currently paused into November, past the CLIA suspension that is schedule to end on Sept. 15.

Cunard voluntarily extended its suspension because of the line’s desire to find a way to both sail safely and with the same signature onboard experience that it has always offered.

“The onboard experience of Cunard is such a huge part of it. No matter what the governmental organizations come back and say about the necessary requirements, we will want to go above and beyond. We will be very thoughtful about how we are going to adjust to keep the onboard experience up to the standards our guests expect,” Smotrys said.

Coming back, Cunard expects to operate with the same health and safety measures that the rest of the industry will be operating with, including an extensive screening protocol prior to embarkation.

Demand is already coming back, according to Smotrys. “2021 bookings are in very good shape for Transatlantic Crossings, Europe, and Canada,” he said, explaining that even though there is still some uncertainty about what borders are open internationally.

Top Stories
Vikings Cancels All River and Ocean Sailings through 2020

Viking is offering all impacted guests a FCC worth 125% of all monies paid to Viking.

Despite the uncertainty, Tollman is remaining optimistic about a recovery, while he and his colleagues at TTC are taking things day-by-day, a philosophy they’ve followed since early in the pandemic.