Travel advisors are in mourning this week, shocked by the devastation caused by a fire at Paris’ Notre Dame cathedral. But they remain hopeful that the iconic church will be restored to its full glory one day.

With most of Notre Dame’s roof gone, and extensive smoke and water damage, the cathedral will remain closed for at least three years, church officials said Tuesday.

Many important features survived, however, including all three of Notre Dame’s 13th-century rose windows and the cathedral’s pipe organ. The cathedral’s Facebook page says that Notre Dame’s 16 rooftop statues were removed for restoration just days before the fire.

Paris Mayor Anne Hidalgo tweeted Tuesday that "the Crown of Thorns, the Tunic of Saint Louis and several other major works" had been saved, while news sources reported that the cathedral’s twin bell towers will survive damage from the fire.

Travel Market Report contacted a number of advisors, and all of them said they shuddered at scenes from the tragedy.

“The initial shock of hearing the cathedral was on fire, I started to cry. It’s like losing a dear relative,” said Crystal Dyer, owner of Gone Again Travel & Tours, Chicago. Dyer visited Notre Dame in 2005 for her 50th birthday. “I remember the joyful experience to walk in the path of history. That’s over 800 years of history. How could this happen?”

Julia Matheson, owner of Travel Julia’s Way, Hickory, North Carolina, was attending a GIFTED Travel Network workshop Monday when she heard the news. Paris is Matheson’s favorite city in the world, and her travel advisor colleagues, clients and friends all rallied to her side as the news unfolded.

“Someone had gotten an alert on their Apple watch, and asked ‘Anyone with a client in Paris? Notre Dame is on fire.’ I burst into tears. The spire crumbling brought back my memories of the twin towers falling (on 9/11),” she said.

Stefanie Katz, owner at The Travel Superhero, in Lake Mary, Florida, said her first reaction was “oh no, how terrible.” After she caught her breath, she thought “I’m so glad I was there and I’ll have those precious memories forever.”

“I spent Monday in tears,” said Lynda Phillippi, owner of Renaissance Travel and Events in McMinnville, Oregon. She recounted one of her past visits to Notre Dame, where she watched a group of French schoolchildren, rapt on the floor, listening to a tour guide telling them about the cathedral.

“I couldn’t understand what the tour guide was saying in French, but the look on those children’s faces, the wonder in their eyes, is what Notre Dame means to me,” she said. “When clients tell me they don’t like churches, I tell them, ‘No, you have to go to Notre Dame. Trust me. It will change you.’”

The cathedral and its immediate surroundings are currently off limits to the public. According to the office of Tourism for the city of Paris, Seine cruises with Bateaux Parisiens have been rerouted on an arm of the Seine away from Notre-Dame.

The agency also said the Notre-Dame and Hôtel de Ville Batobus stops are closed to the public, as are the St. Michel and Cluny la Sorbonne RATP stations.

Grief counselors and travel advisors
This week, agents were assisting customers in Paris or heading there, while also dealing with the grief of past clients consoling each other on social media.

“Some of my clients reminisced with pictures of their trips. They talked about their sadness and being blessed to have visited” Notre Dame at some point in their past, Dyer said. “I have 20 clients going this summer and some messaged me about not being able to have this great visit of their lifetime to Notre Dame.”

Matheson has clients heading to Paris for Easter week, including one scheduled for a private Notre Dame tour. “As soon as I found out, and pulled myself together, I posted on Facebook and sent individual emails out to them. I said, ‘Look. This is happening. It is horrible. But you are going to have a wonderful time.”

She said many of her clients contacted her to thank her for helping them visit Notre Dame before the fire.

It's their first anniversary trip and today is Caitlyn's birthday.

“They have a 2-day hop-on/hop-off pass, and were out touring round yesterday afternoon,” Shamblin Renie said. “They went by Notre Dame about 30 minutes before the fire started, and started to get off the bus, but decided to continue riding around and planned to tour inside today.”

Shamblin Renie texted the couple when she saw the news broadcasts. “They were a little shaken up last night, as we all were, but they have continued on with their Paris sightseeing.  They expressed their sorrow for the people of France and this tragic loss.”

The couple also was sorry that they never got inside Notre Dame, but added that if there was one silver lining in the tragedy, it was that on Tuesday, “the tour guides were all so passionate,” and the couple “felt they learned so much more about the Parisians and Notre Dame” as a result of the emotions the Parisians were feeling. 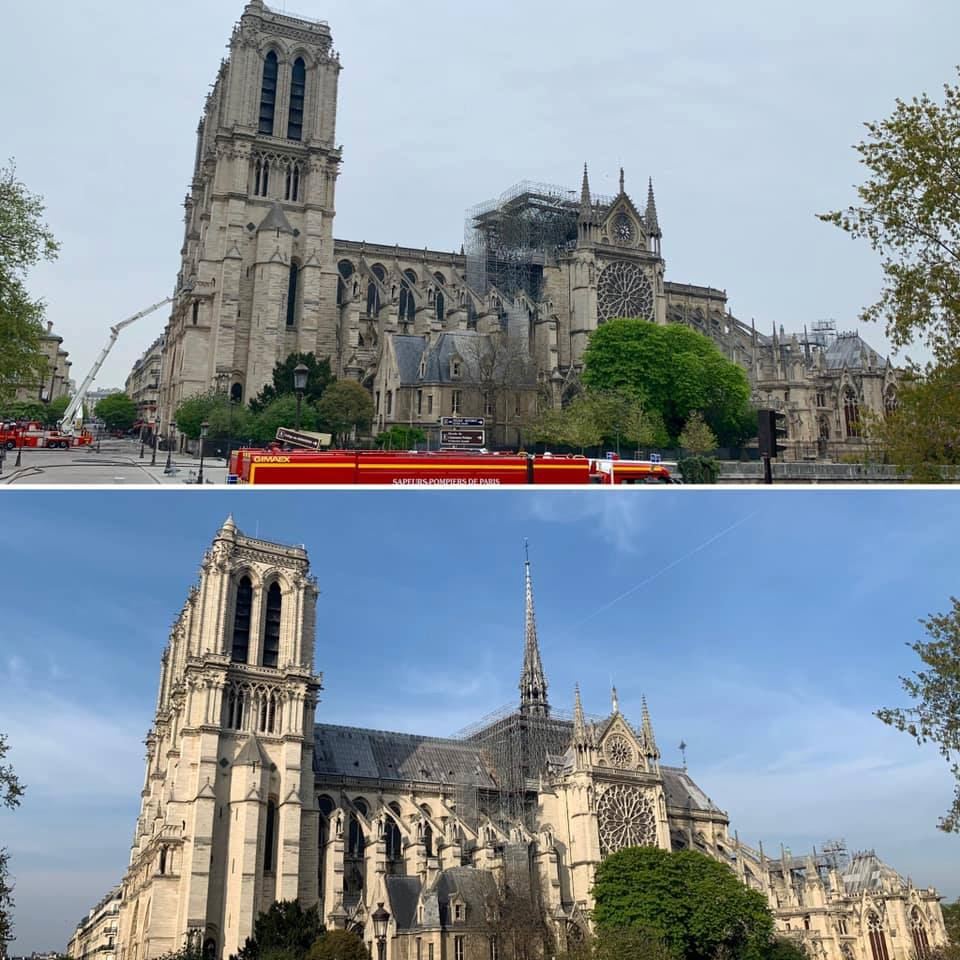 Notre Dame Cathedral before (below) and after (above) the fire. Photo: Caitlyn Cook Montes.

Staying positive
Sentiments in Paris rose on Tuesday, as donations for restoring Notre Dame totaled nearly $700 million by noon. “This Notre-Dame Cathedral, we will rebuild it. All together. This is part of our French destiny,” tweeted France’s President, Emmanuel Macron.

Jean-François Martins, Paris deputy mayor for tourism and sports, speaking to CBS News Tuesday morning, said “Parisians are strong and we will rise up again and build it again and we'll show that even in our sadness, we can rebound."

Sandy Anderson, Riverdale Travel, Minneapolis, Minnesota, is optimistic for the cathedral, Paris and for France, which two years ago suffered a spate of terrorist attacks that dampened tourism.

“I am so inspired by the people of France and the clergy for speaking to healing and rebuilding,” Anderson said. She updated Riverdale Travel’s Facebook profile photo on her agency’s page with a picture of one of the cathedral’s three rose-colored stain glass windows.

The tragedy reminded Katz of the fragility of life, and the places people long to visit. She believes the fire may spur more tourists to want to travel to Paris and other iconic places now, versus later.

“Something could happen to any of us, the loved ones we travel with, or in this case, to the magnificent marvels put up by those who came before us. So we must travel as far and as often as time and money allow,” said Katz.

Matheson first visited Paris when she was 12 years old. “I walked out of the Paris train station, and fell in love. It’s my second home. The age, the history, the sacredness of the hundreds of millions of people who have gone to Notre Dame to pray. The toil and heart the craftsmen put into it. The rose windows. As much as the Eiffel tower is a symbol of Paris, Notre Dame is the heart and soul of the city.”

Despite the fire feeling like a dagger to her heart, Matheson remains optimistic. “It’s still Paris. And Paris is more than just Notre Dame,” Matheson said.

“Rome is a fabulous city. Venice is so romantic. But there is nothing like Paris,” Phillippi said. “People are always going to want to visit Paris.”

"As a European, I believed Notre Dame was indestructible.  I never thought in a million year that she would be burning.  This Cathedral has been through so many events for the past 900 years," she said, noting that she doesn't think the fire will hurt visitor numbers once the cathedral is rebuilt.

"I think people will be intrigued to see Notre Dame now more than ever.  A little bit the same way as people were interested to see the 9/11 site instead of the Word Trade Center before it was down to ashes.  People are curious by nature, so I think now they are not going to think about the previous violence in Paris, but about seeing Notre Dame damaged and being restored.