American Cruise Lines took delivery of its newest river boat, American Symphony, after the boat passed sea trials late last week. The boat is now en route to New Orleans for an on-time start to its inaugural season on the Mississippi River.

“American Symphony is part of our ongoing commitment to leading the U.S. river cruise market by introducing innovative small ships every year,” said Charles B. Robertson, president and CEO of ACL. “Smaller is better on the rivers. We look forward to American Symphony’s first season on the Mississippi, as well as the introduction of sister ship American Serenade early next year.”

American Symphony is the 5th riverboat in the line’s new series of modern river boats and the 15th small ship built by Chesapeake Shipbuilding (owned by the same family). It is a sister ship to American Melody which launched last year. Both 175-passenger boats feature five decks, and all staterooms have private balconies, including single rooms. American Symphony also features a 5th deck skywalk with a glass ellipse that cantilevers over the café below.

The riverboat is set to depart New Orleans on August 27 with an August 30th christening scheduled in Natchez, Mississippi.

TMR THIS WEEK
Sponsored by Villas of Distinction

Villa rentals can be the perfect match for many types of niche travel, including romantic escapes, family reunions, and more. 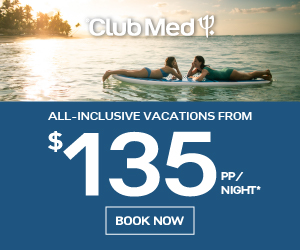 Starting October 8, unvaccinated guests can sail on cruises of 14 nights or less in the Med (excluding Greece) and Caribbean with a pre-cruise test.

Several cruise lines are rerouting ships due to Hurricane Fiona.

Among the 33 voyages throughout French Polynesia and the South Pacific in 2024, will be two brand-new itineraries.

Sun Princess will be the largest for the cruise line, the first with a suites-only restaurant and sun deck, and the first to feature the Dome, a day-to-night entertainment space.

Here Are the Suggested Dress Codes for Each Major Cruise Line