Inspired by the grandeur and enchantment of the European Riviera, the all-new Disney’s Riviera Resort had its grand opening on Monday at Walt Disney World Resort in Orlando, Florida.

To celebrate the debut of the 15th Disney Vacation Club Resort, Terri Schultz, senior vice president and general manager of Disney Vacation Club, and Thomas Mazloum, senior vice president of resorts, premium services, Disney Springs and sports at Walt Disney World, were on hand, along with Mickey the painter, Minnie the poet, Donald the sculptor and Daisy the dancer.

The deluxe resort is the first dedicated Disney Vacation Club resort at Walt Disney World since the opening of Disney’s Saratoga Springs Resort in 2004.

The property offers 300 vacation homes with various accommodation options, including deluxe studios, one- and two-bedroom villas, grand villas that sleep up to 12 guests each, and the new Tower Studios. 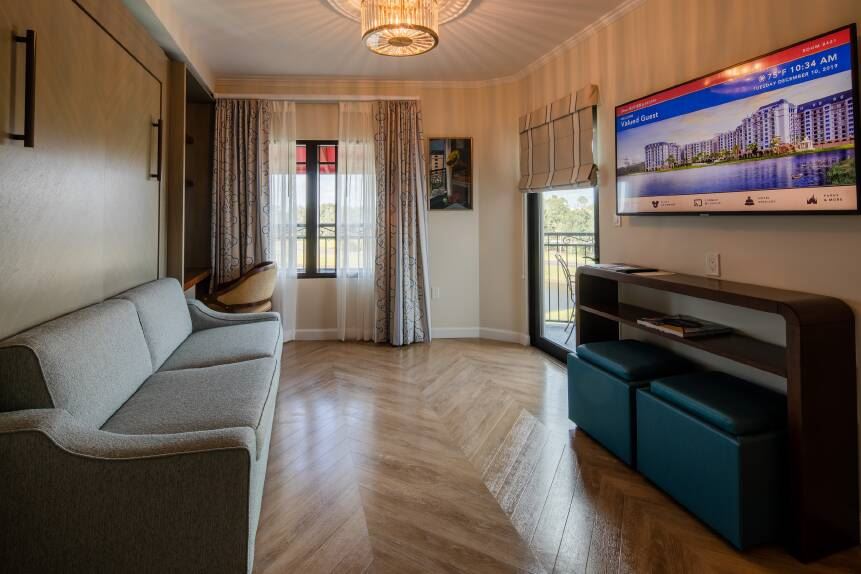 Located in its own tower of the resort, Tower Studios sleeps two with a queen-sized bed housed in a built-in wall unit that is pulled down for sleeping and tucked away to reveal a comfortable lounge-worthy space. The studio includes a sofa, writing nook, beverage center and microwave, storage and a modern bathroom.

Artwork can be found throughout the resort, from Disney concept art with European settings to posters of Disney films as released in Europe and archival photography of Walt Disney’s travels throughout the region, and book titles representing books that Walt Disney gathered on his journeys. Additionally, there are more than 40 signature art pieces created for Disney’s Riviera Resort featuring unique Disney character art inspired by the renowned artistic heritage found along the shores of the European Riviera.

Designed in line with the early 20th-century elegance found throughout Europe and the Mediterranean coastline, the resort has a palm tree-lined boulevard with a façade featuring grand archways, porticos, cascading water features, and towers and terraces. 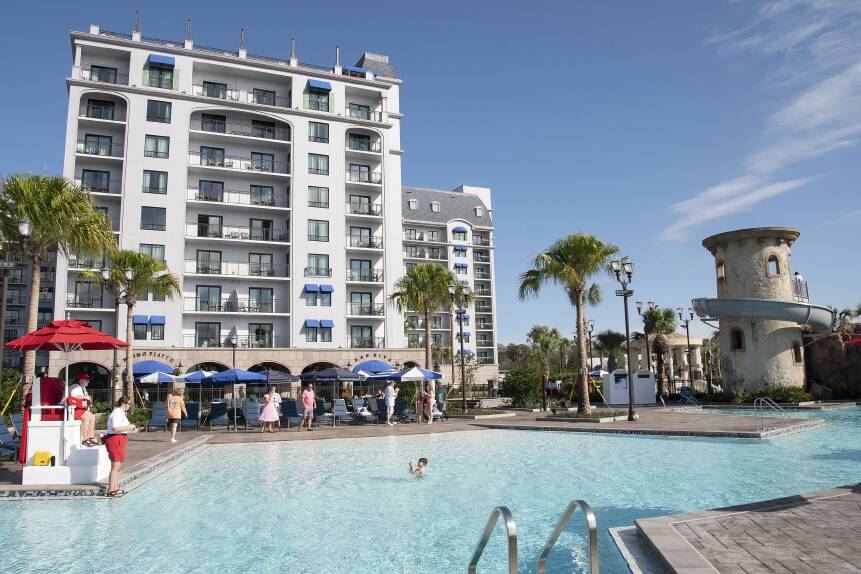 The pool at the Riviera Resort. Photo: Disney

Topolino’s Terrace — Flavors of the Riviera, the resort’s rooftop restaurant, showcases French and Italian flavors, from artisanal pastas tossed with fresh pressed olive oil to a gourmet selection of cheeses, with an onstage kitchen featuring a wood-burning grill. The restaurant also has a collection of wines sourced throughout the South of France and coastal Italy.

Families looking to start their morning off with a fun breakfast experience can visit Topolino’s Terrace for Breakfast à la Art with Mickey & Friends, for a prix-fixe Disney character dining experience.

Guests at the resort also have access to the Disney Skyliner, the new gondola system that connects two theme parks: Epcot and Disney’s Hollywood Studios. Passing through a tunnel archway with mosaic murals, Disney’s Riviera Resort guests are connected to a dedicated station where they can hop aboard a Disney Skyliner gondola. 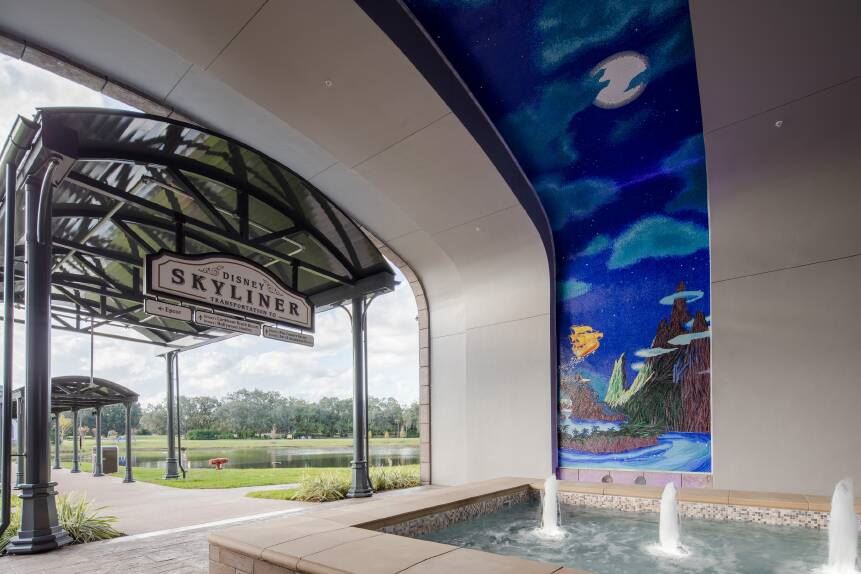 The entrance to the Skyliner at Riviera Resort. Photo: Disney

The property used to be the Newport Beach Marriott Hotel & Spa.

Hard Rock to Acquire Vegas’ Mirage from MGM for $1 Billion

The Mirage is set to join the Hard Rock portfolio after a renovation into a guitar-shaped hotel along the strip.