As it celebrates 50 years in business, Ensemble Travel Group is feeling good about the future. “Everybody had a great 2017, and on the heels of that, 2018 is looking stronger,” said Co-President Libbie Rice.

In fact, when the final numbers are tallied, 2017 is likely to go on record as one of Ensemble’s best ever in terms of distribution of profits to its members. And 2018 looks “extremely strong,” said Rice.

That feeling of success predominated at the member-owned group’s 2017 annual conference in Dallas last October, Rice said. “There was a lot of energy, a lot of excitement. The vibe was we had a good year, and it looks like it’s going to keep coming.”

Despite its “Think Big” theme, there were no major announcements at the 2017 conference, which was attended by about 900 members, partners and guests. Instead, the organization celebrated its roots in the 1968 founding of its forerunner GIANTS, while focusing on the incremental changes it had made over the previous year.

During their keynote at the conference, Rice and Co-President Lindsay Pearlman highlighted developments in four key Ensemble programs: Extranet, its agent portal; Aviate, its airline program and booking tool; Navigate, an integrated booking platform; and its marketing program. 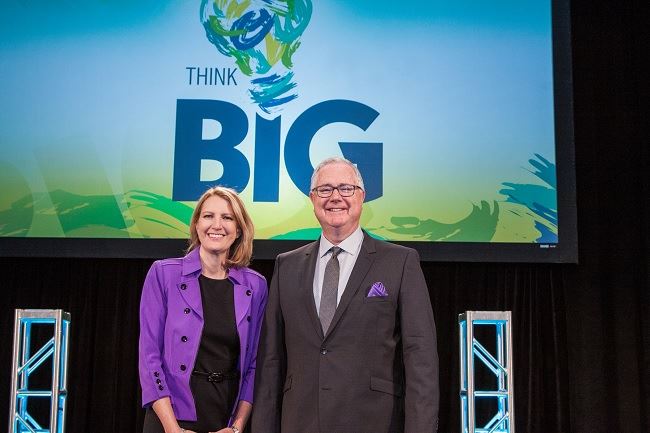 New agent portal
Of the four programs, Ensemble Extranet has undergone the biggest changes, launching a new version in August 2017.

A key feature of the new agent portal is a fast, universal search function that operates much like a Google search, pulling results from all travel products while integrating special offers and rich content. The change means agents no longer have to go through a series of drop-down menus when searching for products. “It’s designed more like people search in today’s world,” Rice said.

Other improvements to the extranet, which is synced to Ensemble’s consumer-facing sites, include reorganized content, so there’s “a lot more information front and center,” Rice said, as well as a mobile-friendly design, an improved ability to share and market content, plus an updated travel agent profile section.

Ensemble rolled out its new extranet gradually, running alpha and beta sites side by side for about three months so it could make continual improvements before shifting entirely to the new site. That process saved agents the usual headaches that go with a sudden overnight change, Rice said.

The gradual nature of the rollout also was significant in that “it is representative of where we’re going,” Rice said. In the future, Ensemble agents can expect more continuous improvements and small product releases and fewer dramatic releases.

Air and cruise booking platforms
Another enhancement for Ensemble members in 2017 was the launch of a call center support desk for Aviate, its air booking platform. Now Ensemble is working on a front-end facelift to Aviate designed to make it more intuitive for agent users.

One challenge for Ensemble last year was the rollout of Navigate, the white-labeled Revelex cruise booking engine that the group launched in October 2016. “We went onto the newest version of Revelex and it wasn’t quite ready for primetime. There’s been a little heartache,” Rice said.

Now Ensemble is doing a more controlled rollout of Navigate, which currently provides access to Ensemble's preferred cruise content, including exclusive offers and hosted cruises. Eventually, the plan is to expand Navigate to include other travel sectors.

Integrating third-party technology
The experience with the Navigate launch presumably was part of the motivation for creating a Product Development-Technology Solutions Department at Ensemble last year. The new department oversees implementation and integration with Ensemble’s infrastructure of third-party technology platforms and tools, as well as agent training on the technology and vendor management.

“We realized we could do a better job of integrating [third-party solutions] with systems like our extranet portal, and of making sure our training department understands the technology well enough to train on how you really use it in day-to-day life,” Rice said.

Since launching the department in May, dialogue with vendors has improved, and Ensemble has benefited from increased agent input on their use of third-party technology.

The other news for Ensemble in 2017 was the hiring in June of Marketing Vice President Carl Schmitt, a marketing veteran who is new to the travel industry. Ensemble is not talking yet about how Schmitt plans to build on the organization’s current use of technology, analytics, social media and targeted digital and print pieces to help members drive business. Rice would only say that “there’ll be some new stuff coming out in marketing.”

Growth goals
In terms of member growth, Ensemble, whose agent shareholders are split about evenly between the U.S. and Canada, is looking to expand internationally beyond North America. So far, the focus has been on Australia and New Zealand, but the organization is eyeing other international markets as well.

Closer to home, an affiliate program introduced in late 2015 that allows agencies to join Ensemble as non-shareholders, making entry more affordable, has proven successful. “It has been an attractive option for smaller agencies to test the water,” said Rice, adding that “a huge portion” of affiliate members end up becoming full shareholders.

Ensemble will celebrate its 50th anniversary at its 2018 annual international conference, Oct. 24 to 28 at the Grand Hyatt Baha Mar in Nassau.

Flight delay and cancellation insurance claims are up 30% over the past three months, but this isn't stopping Americans from traveling.

The Ten Unwritten Rules of Travel

Travel advisors on the “rules” or “standards” that should never be broken.

New DOT Rulemaking Goes Off the Rails on Refunds

"In my long career dealing with the regulatory side of the travel industry, I have never seen anything quite like the latest proposed regulations from the DOT regarding ticket refunds."

Here are five stories to keep travel advisors informed and entertained for August.

What’s Holding Some Suppliers Back from Advance Commission Payments?