Travel advisors came loaded with questions. Tourism Australia officials, accompanied by local tour operators, were in Toronto speaking with area travel professionals and journalists last week during a whistle-stop tour of North America. It was an initiative put together on very short notice after weeks of media focus on – and misinformation about – the devastation to the country by wildfires.

Craig Wickham, proprietor of Exceptional Kangaroo Island and Australian Wildlife Journeys, told attendees: “We had no intentions of coming to North America this winter. This trip was put together at the last minute in response to impressions online that our entire nation is ablaze.”

Tane Evans, of AEA Luxury Tours and Sydney Princess Cruises, was blunt: “We lost a quarter of a million dollars just in profit on cancellations – but 97% of Australia is still open!”

Jane Whitehead, vice president, the Americas, thanked advisors, “for your extra work in a difficult situation,” for fielding queries from travelers and reaching out proactively to booked travelers.

She explained the delegation’s twofold mission: to debunk myths online about Australia’s bushfires, and to provide updated information about travel to the country.

“We’ve been overwhelmed as a country by the support, and just an enormous “Thank you!” and now, the best thing everyone can do to help is come and visit.”

Wickham added: “So many people are saying they want to help. We’ve got enough bandages and pouches. The next thing you can do is come visit us.”

Advisors were on the same page, and they were keen for updates.

Barb Tudino, of Mississauga’s Cruise Holidays and Luxury Travel Boutique, said she hasn’t had any cancellations: “All of my clients want to go anyway, but they do have questions, like ‘When is it ok to go? What can we do now? Which parts are unaffected? Is it safe to go? How do we change our vacation into voluntourism?’”

Cruise Holidays of Forest Hill’s Joanne Sammut added that her clients are asking the same questions, and “We want Australia to have the tourist dollars.”

Uniglobe Bon Voyage Travel’s Lorraine Rose expressed a common sentiment among attending advisors: “Australia needs the help – if we avoid going, tourism will come to a standstill. By supporting tourism, we’re helping the bigger picture and their regrowth.”

“But,” added Tudino, “We don’t want to impede rebuilding or distract resources.”

Tourism Australia and its partners were happy to answer those questions, and to reinforce the message that now, more than ever, Australia wants and needs travelers.

Whitehead, Wickham and Evans cleared up falsehoods about Australia’s wildfires that travel advisors and travelers may have seen online. 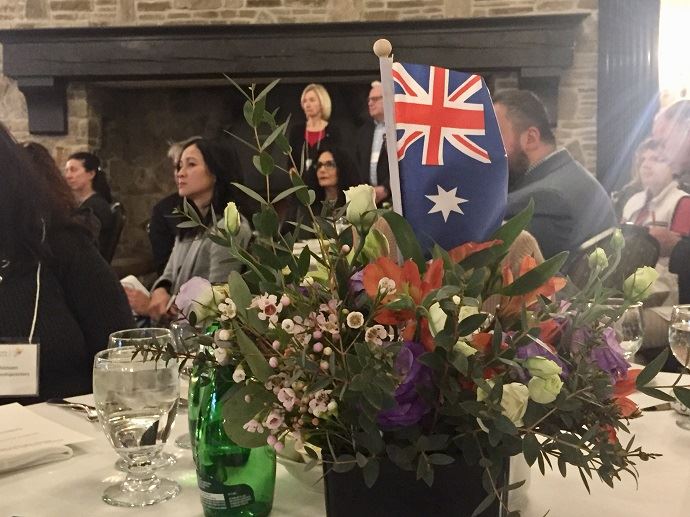 Myth #1: All of Australia is on fire.
Tane Evans addressed the online maps that show practically all of Australia on fire. “It’s affronting, seeing inaccurate maps of wildfires. Fires are focused in specific areas.”

And even where there has been fire, the destruction has been exaggerated. Evans cited Australia’s famous Kangaroo Island, which dominated wildfire news for many days, “But the part of Kangaroo Island that is NOT burned is still three times the size of the entire country of Singapore! We’ve taken a big hit, but tourism experiences on Kangaroo Island continue … just modified.”

Correct maps, real-time information about locations of fires, and updated advice about travel to Australia can be found on this official source: Australia.com

Myth #2: Sydney burned.
Evans was almost able to laugh about this notion, perpetuated by photos of the iconic Sydney Opera House enclosed by scaffolding.

Australia’s capital was not on fire. “The scaffolding is for a scheduled renovation!” he clarified.

Myth #3: All the animals are dead.
No one denies there has been a terrible impact on Australian wildlife – in the affected areas. But, as Exceptional Kangaroo Island’s Craig Wickham pointed out, ‘The response to the wildlife in crisis was better and faster than anything we’ve ever seen in Australia’s history.”

In four days, locals built an animal hospital. And a call for 80 volunteers to help care for rescued animals received 13,000 applications. Now, the focus is on conservation and habitat restoration. 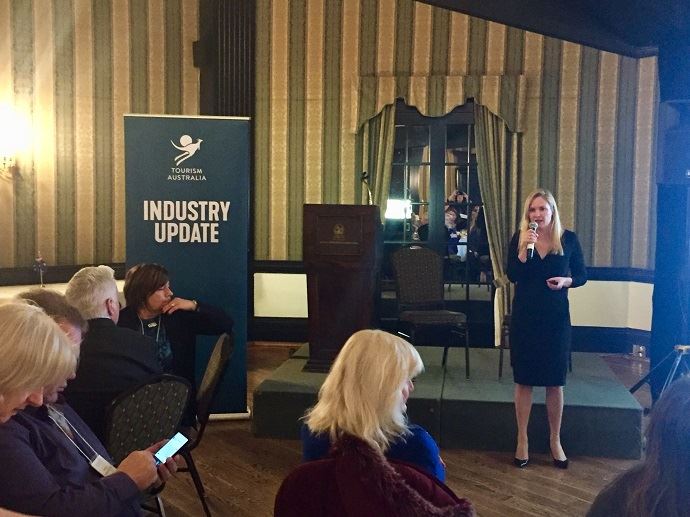 How travelers can help
Travelers have an essential role to play, advisors were told. Whitehead showed this infographic, which Tourism Australia encourages travel advisors to share with their clients. Advisors can download the image here.

More about voluntourism
Wickham provided more details about opportunities that local operators are developing for travelers to help and give back during their visits to Australia. He described some of the projects that support the wildlife that survived the fires and need support to thrive as the landscape returns. They include:

Australian tour operators are working to distribute voluntourism opportunities like these to companies such as Kensington Tours, Goway, Butterfield & Robinson, and others.

‘I liked the debunking’
Judging from feedback from advisors, Australia Tourism’s hearty thanks and information updates were a success.

Ayin Wu, with Expedia CruiseShipCenters in Markham, had been looking for just this type of reassurance. She explained she had just opened a group sailing on Celebrity from Sydney to Auckland in 2021, and needed to know she can say to her clients, “There’s nothing to be afraid of, and you’ll still see a lot of beautiful animals and sights.”

Joseph Lacroix, of Toronto’s Tuxedo Travel, sees new opportunity and, “I liked the debunking.” The newly qualified Australia specialist said: “I want to build my Australia business, and so many people are interested and want to help in Australia right now, this is the perfect time. I want to be the one clients ask for this kind of advice about traveling to Australia.”

“If you have the opportunity where you can walk around the block and the weather permits AND you keep our plan of social distancing, do so. It’s healthy to breathe fresh air out of the house.”

Delta has extended the ability to plan and re-book travel for up to two years.

Airlines issuing vouchers instead of refunds have also caught the eye of ASTA, who this week said it had flagged the issue with the Department of Transportation.

How Are U.S. Airlines Adapting with COVID-19 and Social Distancing

With governments in the U.S. and abroad strongly discouraging travel due to the Coronavirus, airlines are switching their focus.

Disney said it will protect travel advisor commissions for Walt Disney Travel Company packages to both parks with arrival dates in April 2020 that were canceled on or after March 27.

Hawaii to Enforce 14-Day Quarantine For All Visitors

The mandated quarantine, which is the first such action in the nation, will apply to all arrivals at state airports from the continental U.S. and international destinations abroad.