Another major storm of 2019’s hurricane season is expected to make an impact in Bermuda this week.

Hurricane Humberto is forecasted to reach Bermuda sometime on Wednesday and the National Hurricane Center (NHC) has already issued a Tropical Storm Watch for the island, with rain expected to begin on Tuesday.

According to the NHC, the Bahamas, which was heavily affected by Hurricane Dorian earlier this month, will be spared most of the impact — “swells will affect the northwestern Bahamas,” the NHC wrote in its latest advisory on Tuesday morning, but the area won’t be directly impacted like Bermuda will be affected. The same is predicted for the Southeast U.S. coast, which is also expected to see swells but little other impact.

The rest of the coastal U.S. is not expected to be impacted. The NHC’s projected path for Humberto has the storm traveling out into the Atlantic away from the U.S. 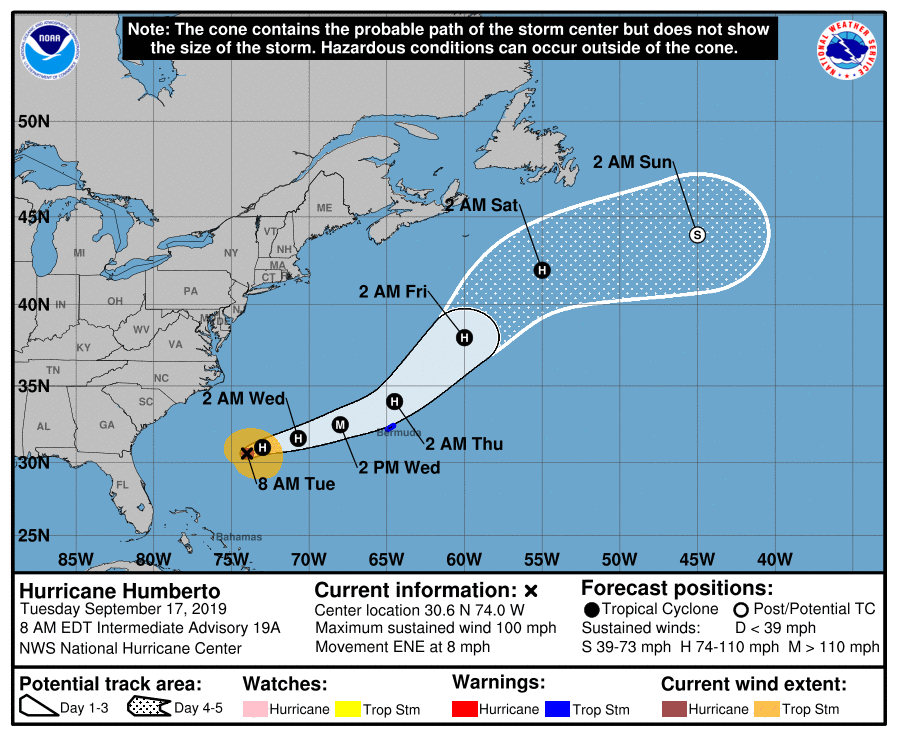 The projected path of Hurricane Humberto, according to the NOAA.

Pride, which was scheduled to sail a 7-day Bermuda itinerary out of Baltimore, will now skip its Bermuda calls and will call at Grand Turk and Amber Cove instead.

Sunrise, which left New York for a 6-day Bermuda sailing on Monday, will now stop at Charleston, South Carolina, on Wednesday; and then arrive at King’s Wharf, Bermuda, on Sept. 20 before returning to New York on Sept. 22.

Breeze, which is currently sailing a 7-day itinerary from Port Canaveral, will continue as scheduled.

Airline waivers
Some airlines that operate out of Bermuda’s L.F. Wade International Airport in St. George’s are offering travel waivers ahead of Humberto’s arrival.

American Airlines is offering waivers on changes for all tickets for travel through Bermuda bought by Sept. 16, as long as the origin and destination cities are the same.

Delta Air Lines is offering Bermuda travelers waivers for changes through Sept. 19, as long as the ticket is reissued for travel no later than Sept. 22.

WestJet is offering a travel waiver for Humberto. Anyone traveling through Bermuda on WestJet on Sept. 19 -21 can change their flights without penalty.