Leaving the elevator of the Gran Hotel Manzana Kempinski La Habana on the way to Abercrombie & Kent’s farewell dinner, I was expecting to climb into one of the luxury motorcoaches A&K had been using to take our group around Cuba. But that was not what the tour operator had in mind. Instead, for the grand finale, our tour directors had assembled a fleet of gleaming pastel-colored antique cars to transport us in what had to be one of the flashiest caravans ever to parade through the streets of Havana.

We climbed two-to-a-car into the Chevys, Fords, a Pontiac and a bright red T-Bird, all from the ‘50s and ‘40s, and all convertibles with the tops down. I found myself in a ’55 Chevy Bel Air. When the driver turned the starter switch, the throaty roar of his vintage V8 engine enveloped us. A dozen drivers positioned themselves in line and pulled out of the cobblestone plaza in front of the hotel onto the streets of Havana. Some of the drivers sounded their horns, which played bugle calls and arpeggios that gave us the feeling we were being launched with trumpet fanfare. 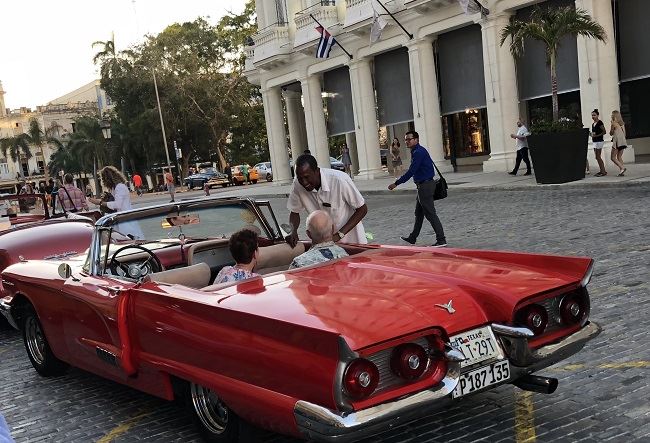 One of the colored antique cars.

The noisy parade sailed along the edge of the Caribbean on Havana’s legendary Malecon, and took us on a 40-minute joyride through various districts of Havana before dropping us off at our restaurant for the final event.

Like Muhammad Ali, the A&K product designers were determined to win the last round decisively. And they succeeded. The experience was Cuban to the max. It could not possibly have happened anywhere else and no participant would be able to purge it from memory, ever.

Our final supper, like most of our meals, took place at one of Cuba’s paladars, one of the rising new class of privately owned restaurants. The paladars are among the most delightful of the dynamic changes that are taking place in Cuba now.

Private businesses were outlawed in the late ‘60s in Cuba, in one of the worst wrong turns of the revolutionary government. But since the ‘90s, the government has reversed its policies toward private small businesses, catalyzing a great wave of creativity and entrepreneurship. The great creativity and artistic flair that is demonstrated in Cuba’s antique cars is now expressing itself in the new private businesses, and it is exciting to observe. 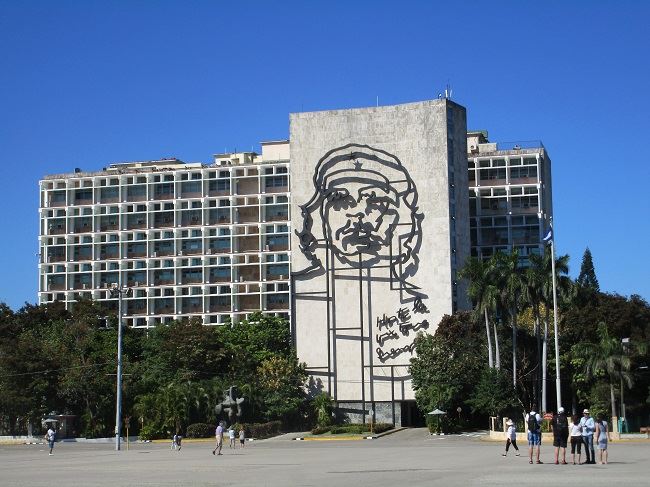 Our exploration of Cuba took us to several different cities, each one starkly different from the others, but all showing different aspects of Cuban character, history and culture. The climax of the tour was Havana, a 500-year old city saturated with history, color and soulfulness.

Old Havana
The Havana tour started with a walking tour of Old Havana led by Lynne Zayas Rubio, a local guide and architectural expert. She had a bouncy walk and when she addressed us she stood poised like a dancer. She spoke in a musical lilt through a perpetual smile, revealing an astonishing command of Cuban history as seen through an architectural lens.

Lynne shared a great deal of knowledge, but more significantly she personified the spirit of the country. She explained how the Cuban identity is a fusion of the multitude of ethnic groups that make up its population. It began with the native Arawaks, then the Spanish in 1492, followed by Africans, French, English and Jews, all coming for their own reasons.

Museum of Fine Arts
A lot was packed into the Havana portion of the trip. We were led through the Museum of Fine Arts by Omar Díaz, an art historian whose entertaining monologue was as colorful as the paintings.

He introduced us to major 20th-century Cuban painters and showed how Cuba fit into the international art scene, with artists such as Wilfedo Lam, who hung out with Picasso, Marcel Duchamp, Diego Rivera and Frida Kahlo; and Raul Martinez, who bravely brought Pop Art to Cuba during the harsher years of Castro’s rule.

Hemingway’s homes and haunts
We visited Hemingway’s home, Finca Vigia, in San Francisco de Paula, nine miles outside of Havana. The airy yellow home on top of a hill is eerily preserved just as Hemingway left it in 1960, a year before he died in Idaho. The museum’s curators even left his half-drunk liquor bottles on the coffee table. He had obviously planned to return to the house. He lived there from 1939 to 1960 and wrote seven books there, including "The Old Man and the Sea" and "A Moveable Feast." 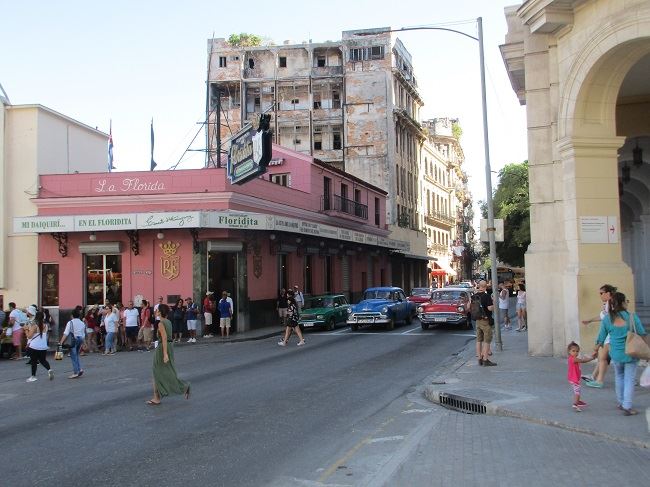 Hemingway’s ties to Cuba ran deep. He spent his winters from 1932 to 1939 in room 511 at the Hotel Ambos Mundos in Old Havana, where he wrote "For Whom the Bell Tolls," based on his experiences during the Spanish Civil War. Castro said he learned some things about guerrilla warfare from the book.

In Old Havana was La Floridita, Hemingway’s favorite bar, where he is said to have drunk half a dozen to a dozen daiquiris at a sitting. The management had a special high-test daiquiri for him called El Papa Doble.

Hotel Nacional
We drank mojitos at the Hotel Nacional, which feels like a trip back to the glory days of Havana. Most of it looks now like it must have looked in the ‘50s. Posters show famous people who gathered there, from Errol Flynn and Gary Cooper in the ‘30s to Churchill and Tyrone Power in the ‘40s; to Nat Cole, Frank Sinatra and Marlon Brando in the ‘50s. Corinthian columns, red marble tile floors, a vintage oak bar and an old Wurlitzer juke box transport you to a remote time when Havana was the trendiest place for the top stratum of international jet setters.

In 56 years of operating tours in exotic destinations, Abercrombie & Kent has gathered a great deal of institutional knowledge. But even more important than the behind-the-scenes operational details that make a trip run smoothly is the primary cornerstone of the company’s raison d'etre: the principle that a tour should not be merely an inventory of sightseeing experiences, or even just a journey of discovery. It should be a celebration of life.

The company showed full command of that principle in Havana. A&K was not about to send its guests home on an ordinary evening of fine dining on their last night in Havana. It had to be an occasion befitting the place and the moment: this last night of reveling under the Havana moon.