Qantas Airways, the Australian airline, completed the world’s first, nonstop flight between New York and Sydney, Australia, over the weekend. The flight, which lasted a total of 19 hours and 16 minutes, served as a test to study the effects of an ultra-long-haul flight on passengers and crew.

“This is a really significant first for aviation,” said Qantas Group CEO Alan Joyce, in a statement. “We know ultra-long-haul flights pose some extra challenges, but that’s been true every time technology has allowed us to fly further. The research we’re doing should give us better strategies for improving comfort and wellbeing along the way.”

A total of 49 passengers and crew were aboard for the test flight, which was used to run a series of experiments to assess the health and wellbeing of those onboard. Tests ranged from monitoring pilot brain waves, melatonin levels, and alertness; and factors like cabin lighting and in-flight meals were adjusted in ways that are expected to help reduce jetlag. 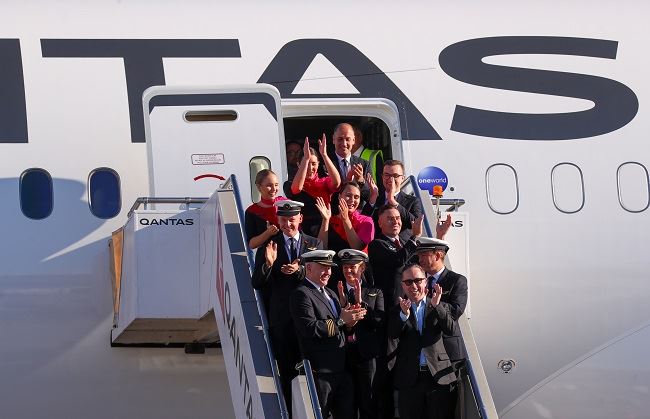 49 passengers and crew were part of the test flight, which was used to run a series of experiments to assess the health and wellbeing of those onboard. Photo: Qantas Airways

The data from these experiments will be used help shape the crew rostering and customer service of Qantas’ ultra-long-haul flights in the future, including for the airline’s proposed Project Sunrise, Qantas’ goal to operate regular, non-stop commercial flights from the east coast of Australia (Brisbane, Sydney and Melbourne) to London and New York.

“What’s already clear is how much time you can save. Our regular, one-stop New York to Sydney service took off three hours before our direct flight, but we arrived a few minutes ahead of it, meaning we saved a significant amount of total travel time by not having to stop,” said Joyce. “Hopefully, [this test was] a preview of a regular service that will speed up how people travel from one side of the globe to the other.”