To step into the TWA Hotel is to take a step back in time.

The former 1962 TWA Flight Center at New York’s JFK International Airport has been repurposed to be a mid-century hotel, embracing its history, from the design to the exhibits of TWA memorabilia on display.

Housed in the iconic building designed by architect Eero Saarinen, the building’s concrete shell serves as the hotel’s lobby. 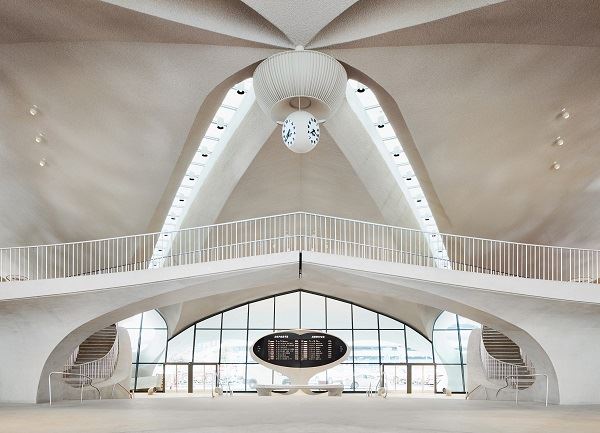 Eero Saarinen’s soaring terminal serves as the heart of the TWA Hotel.

Though the hotel harkens back to air travel’s "Golden Age," initially, all rates offered are non-commissionable. The only way to make a reservation for the TWA Hotel is online at twahotel.com; it’s not currently active within the GDS.

Guests, or airport passengers with some free time, will be immersed in the “Golden Age” of air travel upon entering the TWA Hotel, which officially opened on May 15. In addition to rooms from $249, the TWA Hotel aims to attract business from the airport with $25 passes for its gym and short-term stays from four hours starting at $139. Passengers from other terminals (the hotel is next to Terminal 5) can access the hotel easily by using the AirTrain.

The “Golden Age” of air travel
The check-in area is meant to feel like you’re checking in for a flight; desks evoke the baggage claim desks of airline agents, and an “Arrivals” sign hangs overhead. Self-serve kiosks include the original kiosks from when passengers would check in to TWA flights. 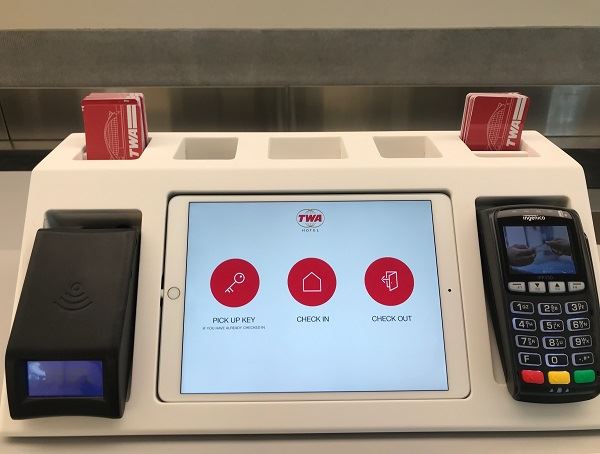 Self-serve kiosks at check-in are joined by Photo: author

Preservationists will be pleased to find certain aspects of the flight center brought back to life. The red carpeted tubes now connect the TWA Hotel lobby to the 512 hotel rooms located in two separate buildings. A food hall is now located in the original departure hall, and the former Paris Café was reinvented under the direction of famed French chef Jean-Georges Vongerichten. The 200-seat restaurant will serve breakfast, lunch and dinner. There are several smaller eateries and cafes, too, including the London Club and the Lisbon Lounge. 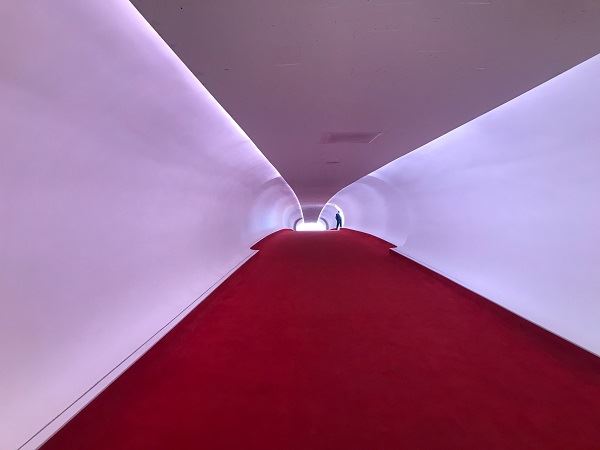 The ionic flight tubes featured in Catch Me If You Can connect to JetBlue’s Terminal 5. Photo: author

The Sunken Lounge is now a cocktail bar, maintaining its red upholstery and Solari departures board. Another 125-seat cocktail lounge is in a 1958 decommissioned Lockheed Constellation airplane, aka “Connie.” 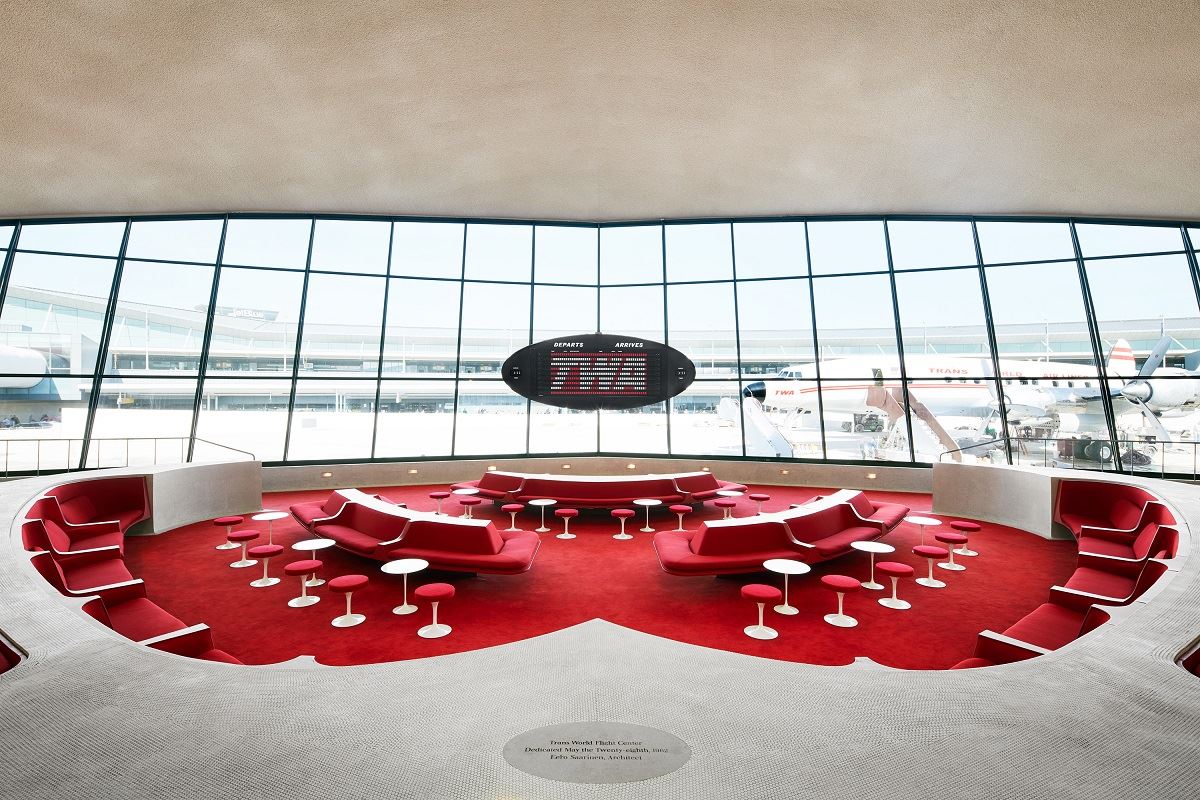 Other touches that can be found are retro model cars, rotary pay phones, and red plush furniture – and it’s all in TWA’s signature red-and-white color scheme.

Bringing a bit of contemporary to the space, shops by Warby Parker, Intelligentsia Coffee, and watchmaker Shinola are located around the lobby.

A rooftop infinity pool and observation area overlook one of the airport’s runways. There is also a 10,000-square-foot fitness center and 50,000 square feet of meeting and event space. 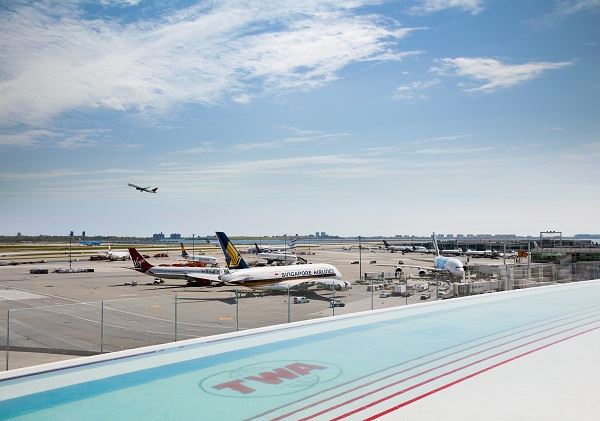 A long time coming
During a media event held before the hotel’s opening, it was clear that everyone was excited. Part of that can be contributed just to the overall retro vibe that has been so well executed, but the anticipation for this hotel has been building for years.

The project took a long time to come to fruition. After TWA went out of business, the flight center closed in 2001 and was nearly knocked down. 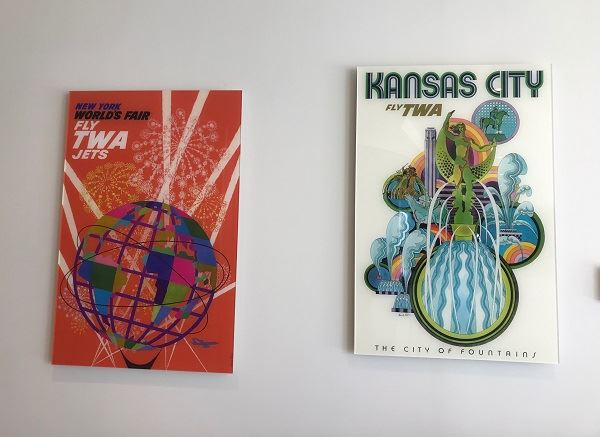 TWA memorabilia can be foundd throughout the hotel. Photo: author

First, there were two decades of work by preservationists, architects and elected officials to protect the integrity of the New York City landmark.

In 2015, Tyler Morse, developer and CEO of MCR Development, won the bid to develop the property. He worked with various parties along the way to ensure the restoration process was sound, with a plan to restore it to its original glory and reopen it as a hotel. The project began in fall 2016, and involved 22 government agencies and more than 170 firms. 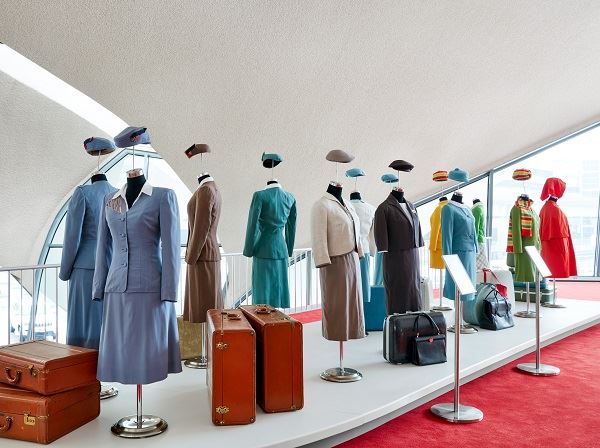 A collection of vintage TWA crew uniform on display.

Hospitality Giants Look to China for Signs of Recovery

Marriott, Hilton, and Hyatt all reported business in Greater China is starting to bounce back – a hopeful sign of what’s to come worldwide.

The three new properties in the coastal resort town of Tulum will fall under the company’s new By Dream Hotel Group brand.

MGM Resorts Will Open Vegas Properties at 25% Capacity to Start

MGM this week also unveiled a new set of health protocols for both its employees and its guests that it hopes will ensure “a very, safe, controlled environment.”

Wyndham Prepares for a Post-Coronavirus Future