The weeklong strike against Lufthansa by The Independent Flight Attendant’s Organization (UFO) has left travelers stranded across Europe since Friday, as the airline canceled hundreds of flights and flyers scrambled to make other plans.

Travelers who booked Lufthansa flights through a travel agent were the lucky ones this weekend, as the web was filled with messages from passengers who had their flights delayed and were unable to reach the airline to change.

Meanwhile, agents told Travel Market Report that—often by working 24/7—they have been able to get their customers where they were going with little to no disruption.

“We have been proactive, which you just don't get with an OTA. I have already rebooked four passengers since the first notice,” said Amanda Klimak, president of Largay Travel in Connecticut. “It's not easy due to having to wait for cancellation before rebooking, but when necessary, I recheck every four hours.”

Indeed, Klimak said, it’s times like these “when clients appreciate a good travel advisor the most.” One of her clients, for example, is a family booked for a Holocaust family reunion on restricted tickets—and everyone has been “on high alert watching the situation.”

Arranging—and then rearranging—a family-worth of tickets isn’t something that comes easy for a traveler who booked through an OTA, but Klimak sees it as an opportunity to demonstrate how valuable her role is.

“It’s what I call job security,” she said.

Step One: Start early
Jack Ezon, CEO of Ovation Vacations in New York, said the best thing his agency did was prepare ahead of time. Even though the airline didn’t announce how the strike would be affecting flights until a few hours before the work stoppage started, Ezon said “in all situations, we are quite proactive.”

“We ran a report of all travelers set to fly Lufthansa and 24 hours prior started to work on backups, so when the strike officially hit all of our clients had a warning and a backup,” he told TMR. That meant more work for the agency—with no additional compensation—but “that is what you pay for when using a travel advisor.”

Michael Holtz, CEO of luxury travel agency SmartFlyer, said his team also dealt with the disruptions by preparing as much as possible before things started to break down.

“SmartFlyer has safeguards in place to be proactive. A great defense is your best offense! We monitor flights and once cancelled, we protect on other carriers. [We’ve had] very few issues. Our 24/7 team tracks well,” he said.

And of course it’s not just flights that were affected by the strike; hotel reservations also, inevitably, need to be changed.

David Lowy, president of Renshaw Travel in Vancouver, noted that whereas good agents have personal relationships with the managers at hotels around the globe, consumers who find themselves calling 800-number customer services are often left fighting cancellation charges or finding alternate hotel space.

At Agent24, senior vice president of call center operations Jill M. Herd, most clients have called and said they had been unable to call Lufthansa and only got busy signals. When they tried to access the website to change flights, they were only given options for Lufthansa and Lufthansa Group carriers, not Star Alliance.

Indeed, agreed Jack Bloch, owner of New York’s JB’s World Travel Consultants, the ultimate value an agent holds is access to the GDS. “By having a GDS at your disposal and quick fingers you can rebook the client on Star Alliance alternatives with not much effort, if you know what you are doing. I had situations where the client goes to the airport and the (airline ticket) agent says there is nothing available (but then our client calls us and) we manage to find a seat. (The client then) goes back to same agent and behold he is confirmed with a seat assignment."

One of the agents at McCabe Worldwide Travel in Virginia was up at 4 a.m., monitoring a clients flight from Bilboa to Boston. When it was cancelled, the agent called Lufthansa to try and rebook, but had to sit through a two-hour wait time from Lufthansa's service center. She was eventually able to save the trip, but it wasn't easy, said the president of McCabe Anne Scully.

"Her clients were thrilled as they enjoyed their last day of holiday. Their advisor understood that time was the clients most valuable asset," she said. "There is no relationship or caring [like that] with an online booking."

Those left stranded
While Lufthansa travelers who had used an agent saw little disruption to their trips, travelers stranded around the world were trying to directly contact Lufthansa. The airline’s call centers had wait times over two hours and some reservations numbers simply weren’t answering at all. Lufthansa’s Facebook page referred customers to try their luck on its website.

A traveler named Muddi-Al Rifai reached out to the airline on Friday, posting, “I have been trying to call you, as one of my flights is cancelled. You never answer!!! What am I supposed to do?”

In response, Lufthansa told him to try and rebook his cancelled flight online or at a ticket counter at the airport. 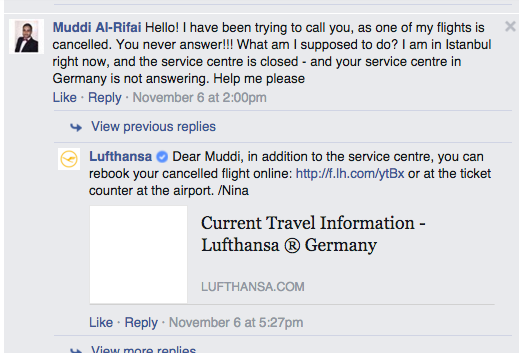 Meanwhile, Lucas Furtado was trying to rebook a flight from Heathrow to Frankfurt, which was a connection to his other flight on the same ticket to Rio de Janiero. When he tried to call the Lufthansa helpline, he was met with busy signals and a two-hour wait. The airline, in response on its Facebook page, gave him the link to its website and told him he could rebook his flight online.

TMR THIS WEEK
Sponsored by Villas of Distinction

Villa rentals can be the perfect match for many types of niche travel, including romantic escapes, family reunions, and more.

Starting October 8, unvaccinated guests can sail on cruises of 14 nights or less in the Med (excluding Greece) and Caribbean with a pre-cruise test.

Over the past 12 months, host agency Nexion has seen more top-producing travel advisors than ever before.

Hertz Is Adding Up to 175,000 Electric Vehicles to Its Fleet

The additions come from a new deal with General Motors.

Hurricane Fiona, one of the first major storms of 2022’s hurricane season, continues its path through the Caribbean.