One of the most fascinating places in Havana is the rooftop of the Parque Central Hotel. In the late afternoon, you can sip an excellent mojito next to the outdoor pool, while the addictive rhythms of the Buena Vista Social Club song “Chan Chan” or a pumped-up version of “Quezas, quezas, quezas” is performed by the energetic band.

When you gaze next door, you find a 1917 building that has been totally renovated as the luxury 5-star Hotel Manzana Kempinski. And at street level, a legion of colorful classic cars from the 1940s and 1950s – now converted to taxis — are waiting for hotel customers. Farther afield lies the ornate Neo-Baroque architecture of the Gran Teatro de la Habana, with the huge dome of the Capitolo as its next-door neighbor. Resembling the U.S. Capitol building in Washington, D.C., the dome of the legislative branch of Cuba’s government is partially covered by a tarpaulin, as renovations surge ahead for Nov. 16, 2019, the 500th anniversary of Havana.

Guided tours of the Capitolo reveal a truly Cuban-styled building, from the two giant bronze statues by Angelo Zanelli, representing the people and the twin ethics of work and progress, and past the bronze doors that illustrate the history of Cuba. Once inside, under the dome, is Zanelli’s statue, La Republica, standing 17 meters (55.7 feet) tall and weighing 49 tons. It is the third biggest bronze statue in the world; and after renovations are complete, the huge drapery hiding the statue will be removed in time for the 500th anniversary celebration.

In reality, according to Manuel Marrero Cruz, Cuba’s Minister of Tourism, “the 500th anniversary is no longer November 16th. It’s every day of 2019.” 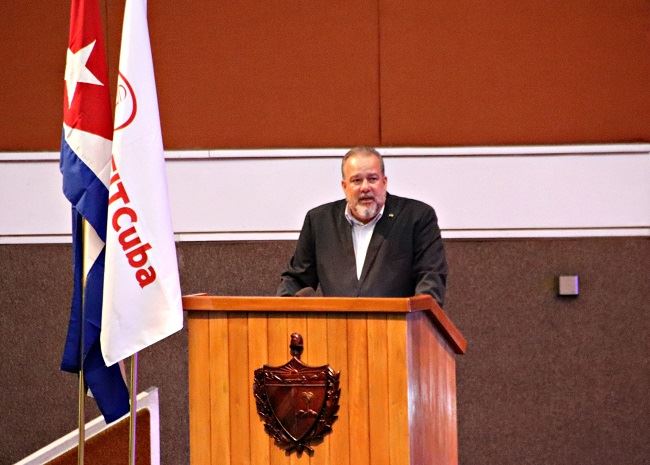 First-hand report from FITCuba 2019
At FITCuba 2019 (Feria Internacional de Tourismo de Cuba), held from May 6 to 10, the atmosphere was energetic, engaged, enthusiastic, and even defiant. At the official inauguration of the event, Minister Cruz lauded the tourism accomplishments of Cuba, since Oct. 28, 1492, when Columbus set foot on the island and noted that, “This is the most beautiful land human eyes have ever seen.”

The tourism minister reported that Havana is the number one inbound center for tourism in Cuba, with 59 airlines directly connecting Havana to 36 cities and a cruise port serviced by 17 cruise lines (which helped to account for a 49.5% increase in cruise passengers from 2017 to 2018).  Minister Cruz noted that 4.7 million foreign visitors arrived in Cuba in 2018, with Canada accounting for 1.1 million of those visitors (roughly 23%), followed by Americans, Cuban Ex-pats; and visitors from Mexico, Russia, China, Columbia, and Portugal.

Echoing the words of Renaldo Garcia Zapata, the President of the Government of Havana, who declared that “Havana provides an absolutely safe environment for tourism,” Minister Cruz cited a survey where 600,000 visitors said they chose Cuba for its reputation as a safe tourism destination. “There are no drug cartels or kidnappings here,” he said.

Minister Cruz stated that the Cubans are “educated, hospitable people” who care about the country and the environment. There are nine UNESCO World Heritage sites on the island; 14 national parks; and 960 kilometers (596 miles) of white sand beaches, with Veradero rated as the No. 2 beach destination in the world.

He acknowledged complaints from visitors about Cuba’s poor internet connectivity and noted that, in 2019, all 4- and 5-star hotels will have WiFi; and that the number of “hot spots” will increase throughout the country to include some of the streets and parks in major cities.

And on the theme of “connectivity,” Minister Cruz said that “nature camping” was one of the current projects of the Ministry, as a response to travelers seeking closer ties to the land and the people. He stated that while 4,000 new hotel rooms would open in Cuba in 2019, there were already 26,000 home rental rooms available for those who preferred to experience the current travel trend of living like a local.

Minister Cruz remarked that, at this year’s 39th FITCuba Conference, there were 198 reporters representing 34 countries. Later in his closing remarks, he returned to the theme of international cooperation and respect as a beacon of strength for the future, but in the context of recent pronouncements by the U.S. of strengthening the blockade of Cuba and putting teeth into Title III of the Helms-Burton Act (allowing U.S. nationals to sue for damage for private property seized during the Cuban Revolution). The Minister defiantly proclaimed in an emotional tone, “We have proven ourselves in the past, we are proving ourselves now, and we will keep doing it in the future.” And he stated, as he did in his opening remarks, that in the spirit of “unity, fraternity, solidarity, and peace, we are convinced that a better world is possible.”

Maria Reyes Maroto Illera, the Minister of Industry, Commerce and Tourism from Spain, the guest country for FITCuba 2019, noted outright that “Spain and the European Union are opposed to the re-enactment of Helms-Burton.”  She then paid an emotional tribute to the host city when she declared that “Havana is a mood.” She cited the architecture, the “castles of the 18th century,” and the rich cultural heritage that keeps drawing tourists back to the city. 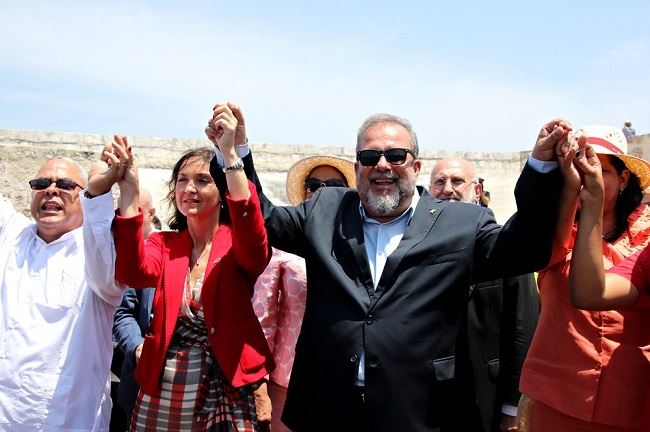 Maria Reyes Maroto Illera, the Minister of Industry, Commerce and Tourism from Spain, the guest country for FITCuba 2019.

A view from the street
And for this writer, my return to Havana after a five-year absence, was a meaningful, eye-opening experience. In between conference sessions, I had the opportunity to walk the Malecon (the oceanside boardwalk), to see new architecture that had replaced some of the crumbling buildings, a number of trendy-looking bars and restaurants, as well as colorful and lively art installations that were part of the Biennial Art Festival. I also walked the historic downtown core of the city several times, from the Kempinski Hotel, through the five historic plazas (Catedral, Vieja, San Francisco, Santo Cristo, and Armas), through side streets with bodegas, murals and hidden art galleries; and on to the Mercado Central de San José, that huge, warehouse, souvenir emporium near the cruise dock.

Throughout the city, I saw buildings under renovation as part of the 500th anniversary celebrations (in fact, there are supposedly 4,500 such projects in the works); and learned that the person mostly responsible for this transformation is Eusebio Leal Spengler, the official historian of Havana. He spoke at FITCuba, driving home the point that his passion for Havana incorporates the preservation of the city’s history, heritage and traditions, without turning the city into a sterile, living museum. His goal is to create a dynamic, interactive atmosphere for locals and visitors alike.

It has been 500 years since King Philip II of Spain granted Havana the title of “city” (cuidad) — and we know that not only does every city have a personality of its own, but that every visitor has special interests that inevitably intersect with what the city has to offer. In Havana, it’s a combination of fortresses, personalities (Hemingway, Marti, Guevera, Castro), the influence of Santeria, the dazzle of La Tropicana, plus architecture, food, art, history, mojitos, or a ride in a 1948 Chevy. And with myriad changes on the horizon, the 500th anniversary is certainly just the starting point for Havana.

Related Articles
Travel in Uncertain Times: 5 Ways to Satisfy Those Points of Passion
Indispensable You: 5 Meaningful Ways to Connect with Your Clients’ Travel Needs
Six Ways to Get the Best ROI at Your Next Industry Conference
The Papantla Flyers: Four Lessons on What Makes Travelers Tick
Why Agents Should Market Themselves As a Global Travel Influencer in 2019
The Seasons Change and So Do I
Seven Reasons to Send Special Interest Clients to San Diego
Six Ways to Master Product Knowledge and Why It's Important
Five Proven Methods of Ticking Off Your Clients
Triple Hat Trick: 9 Reasons to Recommend a Trip to Panama

The warning comes “in the wake of recent incidents involving taxi and Uber drivers in Quintana Roo.”

Fans can otherwise make the 9-hour drive from Cincinnati to Kansas City.

Next Caribbean Marketplace to be Held in Barbados This May

Barbados will host the 41st edition of the CHTA Caribbean Travel Marketplace this spring.