As travelers become increasingly interested in cultural immersion, many visitors to South Africa are moving beyond the Big Five of the wilderness to the Big Three of South Africa’s rich urban culture: Cape Town, Johannesburg and Durban.

The standard introductory tour package to South Africa is the Cape/Kruger itinerary, which gives a snapshot cross-section of the South African experience within a week. It includes four nights in Cape Town and two nights at a safari lodge in Kruger National Park or another game reserve. It provides a taste of the country within the logic of a one-week vacation. But one week is really too short a time to get even a minimal experience of South Africa.

Tour operators offer the one-week packages to hook clients on South Africa, knowing that most travelers who experience a taste of it will want to come back. “The first time they come for the animals,” they say. “Then they come back for the people.” 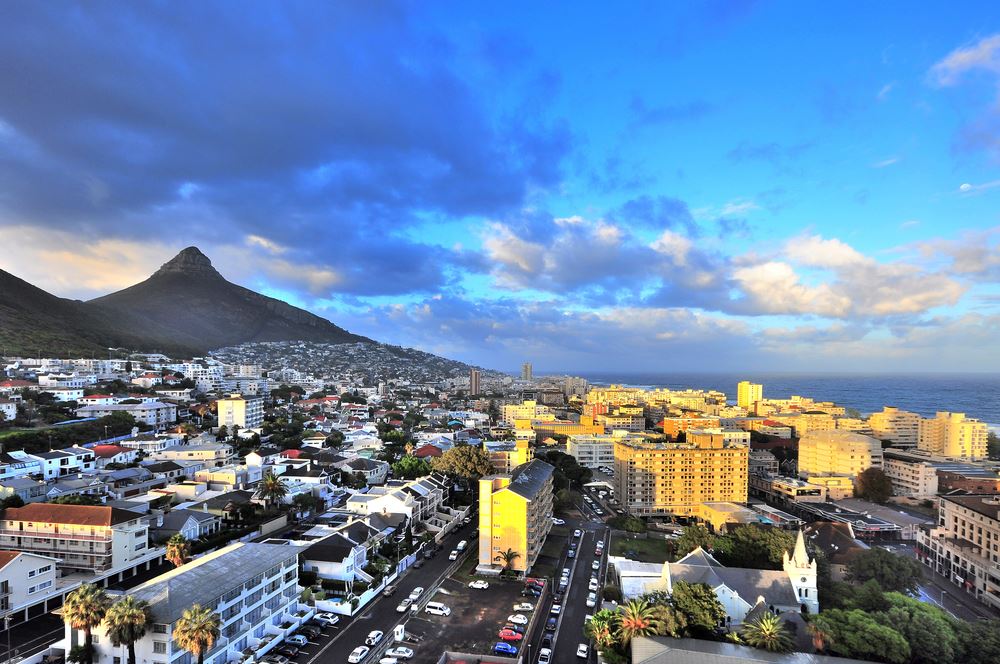 Cape Town
Cape Town is so popular, it almost needs no introduction. South Africa’s most international city often tops lists of hot international destinations. Photographs of Cape Town show the picturesque port city at the foot of the staggering landscape of Table Mountain, which looms over the city and dwarfs it.

It seems practically everyone loves Cape Town. It has beaches, a nearly 400-year colonial history and architecture, and a lively urban culture. Within an hour’s drive or so is one of the world’s great winelands. Cape Town offers tourists the glorious Victoria and Alfred Waterfront, with its multitude of shops, restaurants and hotels; and within a short ferry ride, the grim site of the Robben Island prison, where Nelson Mandela was imprisoned for 18 of his 27 years of incarceration.

The city’s cuisine is as rich and various as its overall culture, which has marinated over centuries with a blend of cultures from all over Africa, Europe, Asia and even America. Cape Town was founded by the Dutch East India company in 1652 as a stopover point for traders traveling between the Atlantic and Indian Oceans. It is known as the Mother City because it was the beginning of South Africa as a European colony.

Soon after the Dutch established their colony, around 1652, they started bringing people from Southeast Asia for labor, and the descendants of those people still form one of the strongest cultural presences in Cape Town. They join with indigenous Africans and Europeans to form the diverse multicultural tapestry of Cape Town.

The Afrikaans language, considered one of the newest distinct languages, grew from the mixture of people of different languages and cultures trying to communicate. The language derives from Dutch, Portuguese, native San and Khoi, English, German, French and others.

The glorious cultural blend expresses itself in all aspects of culture in Cape Town, including architecture, cuisine, fashion, visual and plastic arts, and music and the performing arts, which appear in a rich panorama to the visitor to Cape Town. 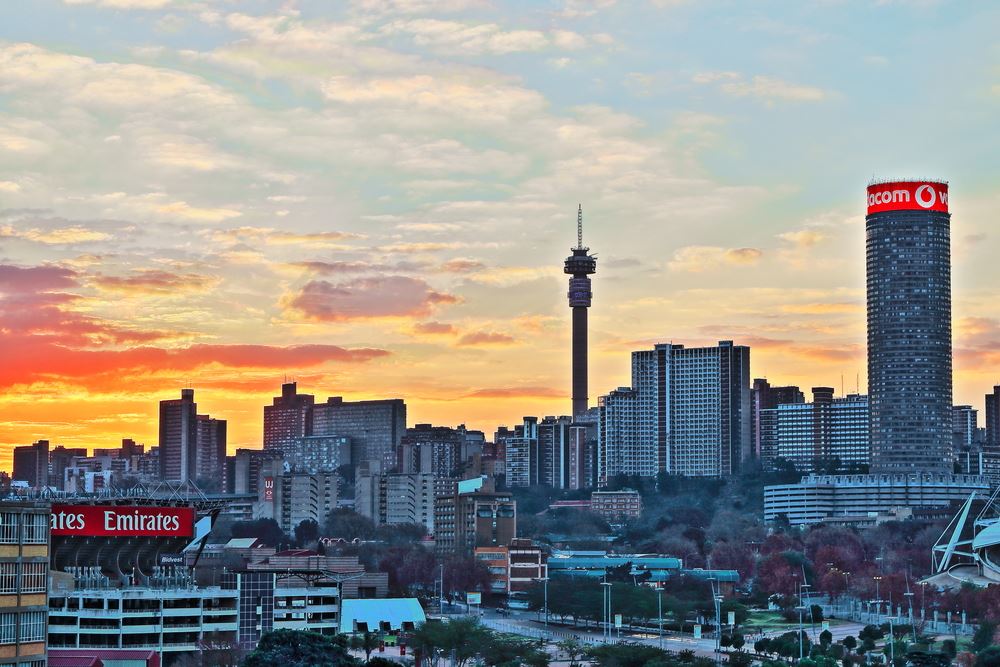 Johannesburg
While no one can say that Cape Town is not deserving of its star status, it is true that Johannesburg is often overlooked because it stands in Cape Town’s shadow. But Joburg, or Josie, is worthy of a great deal of attention in its own right.

In the 1880s, gold was discovered in the Witwatersrand Basin, and a mining camp was set up to accommodate miners during the ensuing gold rush. It turned out to be one of the wildest gold rushes in history, with 40 percent of the gold mined in the history of the earth coming out of what became known as the Rand.

Much of the story of modern South Africa grows out of that gold rush, with people converging from all over the world to try to get a piece of the action and become gold magnates. The mines produced unprecedented wealth, but required hard labor, and the efforts of the mining companies to recruit labor from the native populations laid the groundwork for the economic and class struggles that characterized the strife-ridden evolution of Johannesburg from a mining camp to a vast, powerful metropolis in a century of meteoric growth.

Johannesburg’s history is much shorter than Cape Town’s, and it cannot match Cape Town’s incomparable scenic beauty, but Joburg has much to offer. Johannesburg is the business center of southern Africa. It is the African headquarters of many international corporations, and as a formidable economic engine and the capital city of a vibrant new democracy founded on the Rainbow Nation ideals of Nelson Mandela, it attracts Africans from across the vast continent, all of whom become part of its cultural landscape.

Although Nelson Mandela was born in the Eastern Cape, was imprisoned on Robben Island and gave his first speech after his release in Cape Town, most of his history and career were centered in and around Johannesburg. That was where he set up his law office in partnership with Oliver Tambo and where most of his political activities took place.

Today, Johannesburg is a vital center of Pan African communities who have migrated from elsewhere in Africa and become part of its diverse international culture. After South Africa has been through difficult economic struggles, parts of Johannesburg that were in decline are now going through a period of rejuvenation. Notable among these is the Maboneng Precinct, which has become a vibrant tourist attraction, with street markets, shops, restaurants, galleries and performing art venues.

From Johannesburg, you can visit Soweto, the Southwestern Township where Nobel Prize winners Mandela and Archbishop Desmond Tutu both lived. You can even go into Mandela’s modest former home, furnished somewhat as it was when he lived there. You can tour the historic points that marked Mandela’s life and the history of the anti-apartheid movement. At the Apartheid Museum, you can take a trip through that history with large and vivid presentations of documents, artifacts and videos that bring that complex and grim history to life. 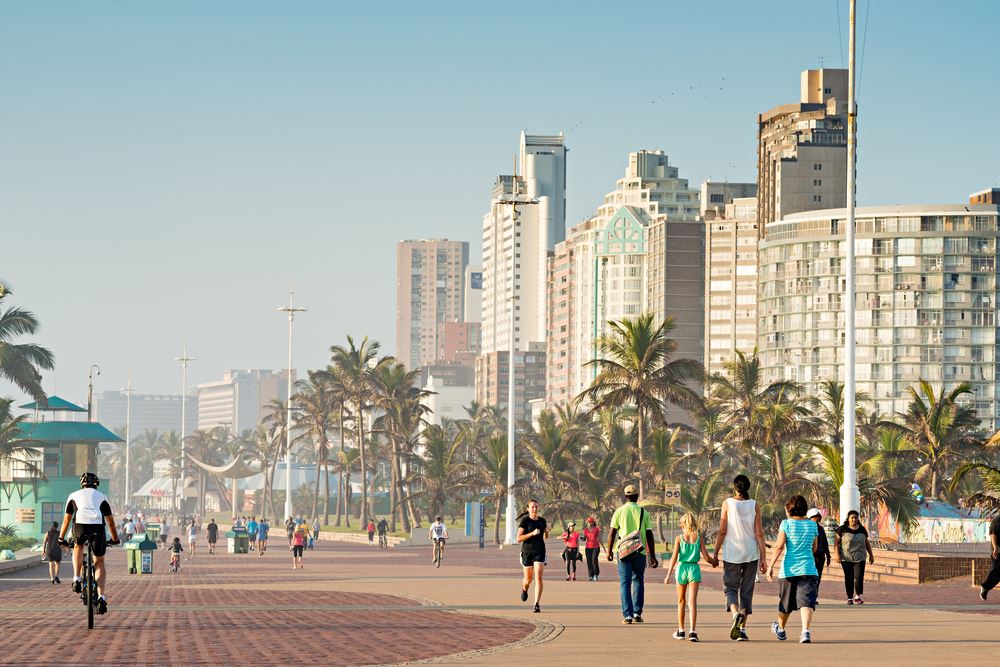 Durban
If Johannesburg stands in the shadow of Cape Town, South Africa’s third major city has to take a back seat to both. South Africa’s vibrant city on the Indian Ocean is often overlooked, which is a shame because it is worthy of standing tall next to its sister cities in the pantheon of South African cities.

Like Cape Town, Durban has a rich multicultural history dating back to the early days of Africa’s colonial times. The Portuguese explorer, Vasco da Gama, discovered the natural port on Christmas Day in 1497 and named it Rio de Natal, or “River of Christmas.” The name “Natal” remains as part of the name of the South African province now known as KwaZulu-Natal. Durban is now the largest and busiest port in Southern Africa.

The city at the harbor was named Durban by the English in 1835 during their reign there. Between 1860 and 1911, many Indians were brought from India as indentured labor, creating an Indian cultural identity that remains a strong cultural component today in Durban, with the largest Indian population of any city outside of India itself.

Durban’s cultural blend is distinct from that of Cape Town and Joburg, but it is equally as rich and vibrant. And Durban offers its warm, sultry climate and its many, long beaches on the Indian Ocean, much warmer than the Atlantic beaches of Cape Town. Its street markets, such as the Victoria Street Market, are priceless both for shopping and as living museums of culture.

The surrounding province of KwaZulu-Natal is a richly green and fertile landscape of mountains and valleys. It has many Big Five game reserves offering safari experiences and the glorious Drakensburg Mountains for adventure. It is the historic homeland of the Zulus and offers rich historical and cultural experiences to visitors.

Durban was where Ghandi rose to prominence. He spent 20 years there and many of the historical sites of his legacy can be found in the Gandhi Trail Through Durban.

Durban too often gets the short shrift, but deserves equal billing with the other two of South Africa’s urban triumvirate. It ought to be included in an exploration of the country’s urban culture.