Try to imagine, if you can, the world of one hundred years ago. In 1918, World War I had just ended. You could bring home the bacon for 40 cents a pound. The daily newspaper cost 2 cents.

In recognition of its 100th anniversary, Collette, America’s oldest existing tour operator, did a re-enactment of the first cross-country tour ever offered by the company in 1918. Founder Jack Collette’s first on-the-road trip was a 21-day trip out of Boston’s Greyhound terminal all the way to Florida. It cost $61.50, with most meals included. Collette’s first tours were operated on jitney buses.

As part of its centennial celebration, Collette recreated the same tour, as closely as possible, in a world that has evolved 100 years since the original. The company invited some of its top travel agent partners and clients to participate. The three-week tour was broken into one-week sections and participants were invited to join the tour for a week for the original price, not adjusted for inflation. 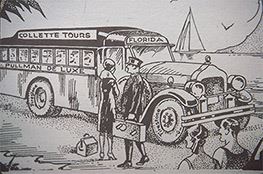 An original ad for a Collette Tour. Photo: Collette

The original tour departed from Boston’s Greyhound bus terminal. The replay followed the same route as closely as was practical. This time it began in Pawtucket, Rhode Island, where the company has had its headquarters since 1927.

Traveling back in time
Dan Sullivan, Jr., CEO of Collette, joined for part of the tour. “I met a number of the agents on the tour down in St. Augustine,” said Sullivan. “We went on an 11-mile stretch of the original Brick Road that Jack Collette would have taken through the Everglades between St. Augustine and Daytona. It’s only nine feet wide. It was great. People just loved it. You’re really going through this old road that was cut through marshes like the Everglades. It was really fascinating.”

In 1918, automobiles were still a fairly new addition to the American landscape, and highways were minimal. The Interstate highway system of today was not built until the 1950s. The great east coast highway, U.S. Route 1, which runs from Key West, Florida, to Fort Kent, Maine, was not laid until the 1920s.
“They really were explorers then to go south,” said Sullivan. “No one had ever done it. Below Richmond, it wasn’t like you were just on the highway or even on Route 1. You were on some old dirt roads and on the old Dixie Highway, which came down from central Michigan.”

For Jean Gagnon, president of Plaza Travel Center in Latham, New York, and one of the participating travel agents, the Old Brick Road was one of many revelations she experienced on the trip.

“The highlight of trip for me was just outside of St. Augustine, the Old Brick Road,” said Gagnon. “It was completed in 1916, completely paved with brick because in that area of country, with the wetlands, it was very difficult to build roads. There’s an 11-mile stretch you can still drive on. It’s only nine feet wide. It was only used for 15 years.”

These were the early days of touring, when the practices of today’s tour industry were just being established for the first time. It was a far cry from what travelers today are used to.

“In the old days, in 1918,” said Sullivan, “a lot of the roads below Richmond were dirt roads. So sometimes the hotels wouldn’t let the guests or the tour manager, Jack Collette, through the front door, because when it rained, in those old jitneys, it wasn’t the best of conditions. If it was a rainy day, they’d make them go through the servant quarters in the back because they had mud all over their feet. Then they would let them go up to their room to get cleaned up and have a nice dinner afterward.”

Stop to give back
While in Florida, the tour deviated from the original route to stop in Orlando to attend an event in recognition of the conclusion of Collette’s One Million Meals initiative, in which the company partnered with the organization, Rise Against Hunger, to package dry meals to be shipped all over the world to people in need.

When the company undertook the project three years ago, it set 1 million meals as its target, and ended up surpassing it by a third, sending 1.3 million meals to people in need. The meals are dry so they can be shipped long distances. One meal, consisting of white rice, a soy product, dehydrated vegetables and a vitamin packet, can feed six people.

The group on the tour joined in on the packing process and packed more than 2,000 meals. “We packaged rice, grain and soy,” said Sullivan, “all these different things in a meal that would feed six people for a day. It’s a very nutritious, packaged meal. It’s a dry meal so we can ship it all over the world, or we can ship it to New Orleans, New York or Los Angeles. We send it to all these places, homeless shelters, children-in-need shelters, schools, so kids can get a good meal so they can get an education.”

For participating travel agents, it was an opportunity to experience a good-karma moment, pitching in on a project that will help people who really need it.

“At a site on the outskirts of Orlando, we helped to pack meals for Rise Against Hunger,” said Jean Gagnon. “In an hour, we packed over 2,000 meals. In some places, it will be the only meal people will have in a day.”

One century, two owners
Collette has only changed ownership once in its 100-year history. It has been in the hands of the Sullivan family for more than half a century.

Jack Collette continued to operate Collette tours through most of the twentieth century, except for an interruption for World War II. In 1962, when he was 70 years old, he was persuaded to sell the company to a young man named Dan Sullivan, who Collette knew from his professional dealings with the Sage Short Bus Line Company, where Sullivan was the transportation manager.

Sullivan had started in the travel business in 1945, after returning from service in the Counter Intelligence Division under General George Patton during World War II.

Today, Collette has offices in the U.S., Great Britain, Canada and Australia. It offers nearly 200 tours to 59 countries on seven continents.