Greece has battled to recover from the financial precipice it stood at in 2010, buoyed by the country’s tourism industry, which has held steady through the last eight years, even growing its U.S. inbound travelers.

With this backdrop, the American Society of Travel Agents (ASTA) opened its Greece Destination Expo this Sunday, celebrating the contribution American travelers and travel advisors have made to mitigating the impact of the country’s extraordinarily high unemployment rates and government debt. The country seeks to place Greece even higher on must-see destination lists for U.S. citizens.

“The United States is an important market to us, and through our targeted actions, we experienced double-digit growth in the last three years. About one million Americans now visit Greece, and demand is growing from year to year. We look forward to welcoming many more American travelers as a result of this partnership with ASTA,” she said.

Kountoura said Greece has experienced record-breaking numbers in arrivals and revenues, and that it has successfully expanded tourism beyond the traditional summer season by about 40 percent during that same time. 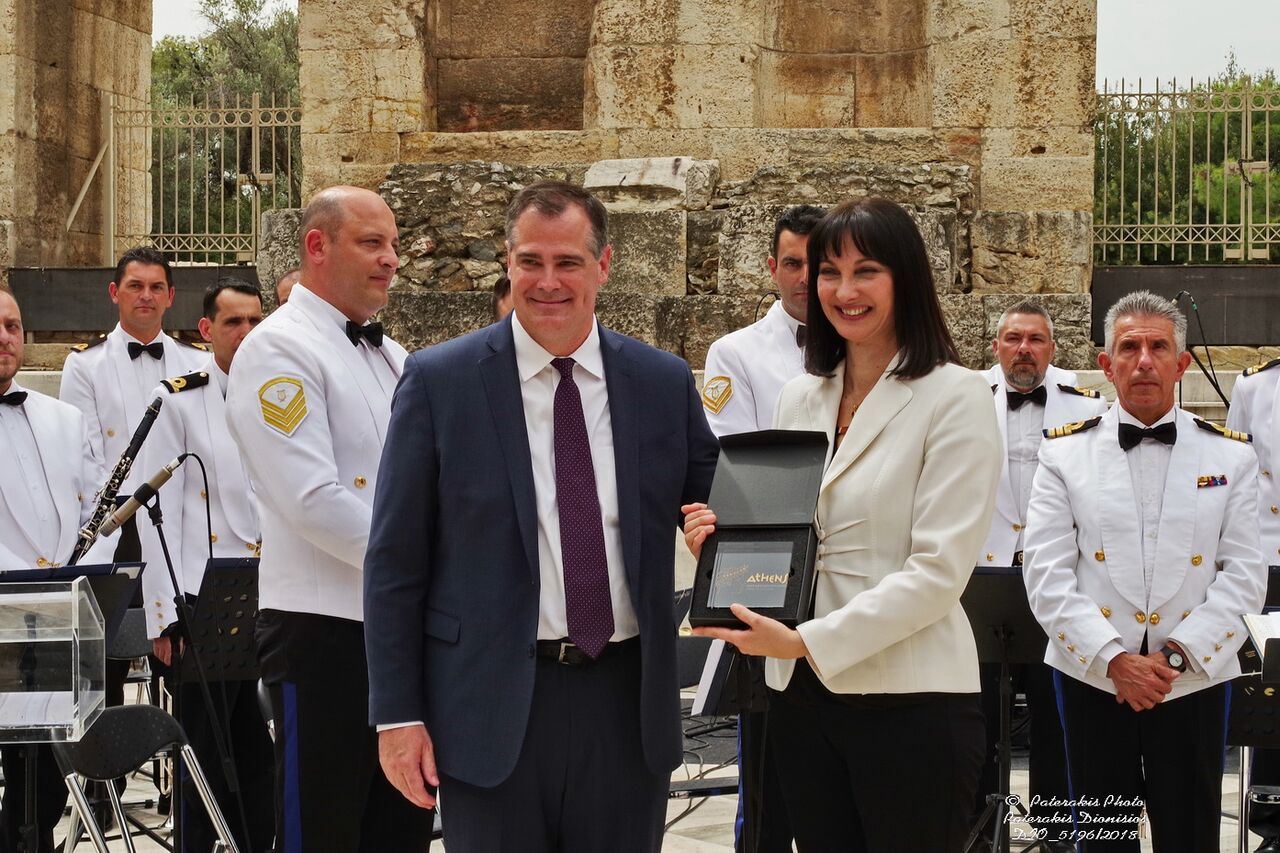 Greece is expecting an additional 2 million visitors this year, Kountoura estimated, which should make 2018 its strongest ever, including a first quarter that saw a 20 percent increase in international arrivals.

“This should be the year that Greece reemerges,” said U.S. Ambassador Geoffrey R. Pyatt, who delivered remarks at the opening ceremony, as well.

In perhaps the most emotional moment of the opening ceremony, Zane Kerby, ASTA president and CEO, told the assembly about a personal connection he had with Greece.

Kerby recounted how his mother, an elementary school teacher, visited the Acropolis approximately 40 years ago. "She loved Greek mythology. She was able to visit the Parthenon after many years of showing pictures of it to her students, and tears filled her eyes as she walked up the steps of the Acropolis,” he said.

“I’m so happy that my two daughters and my son will join me here later this week to climb those same steps and follow in their grandmother’s footsteps.” 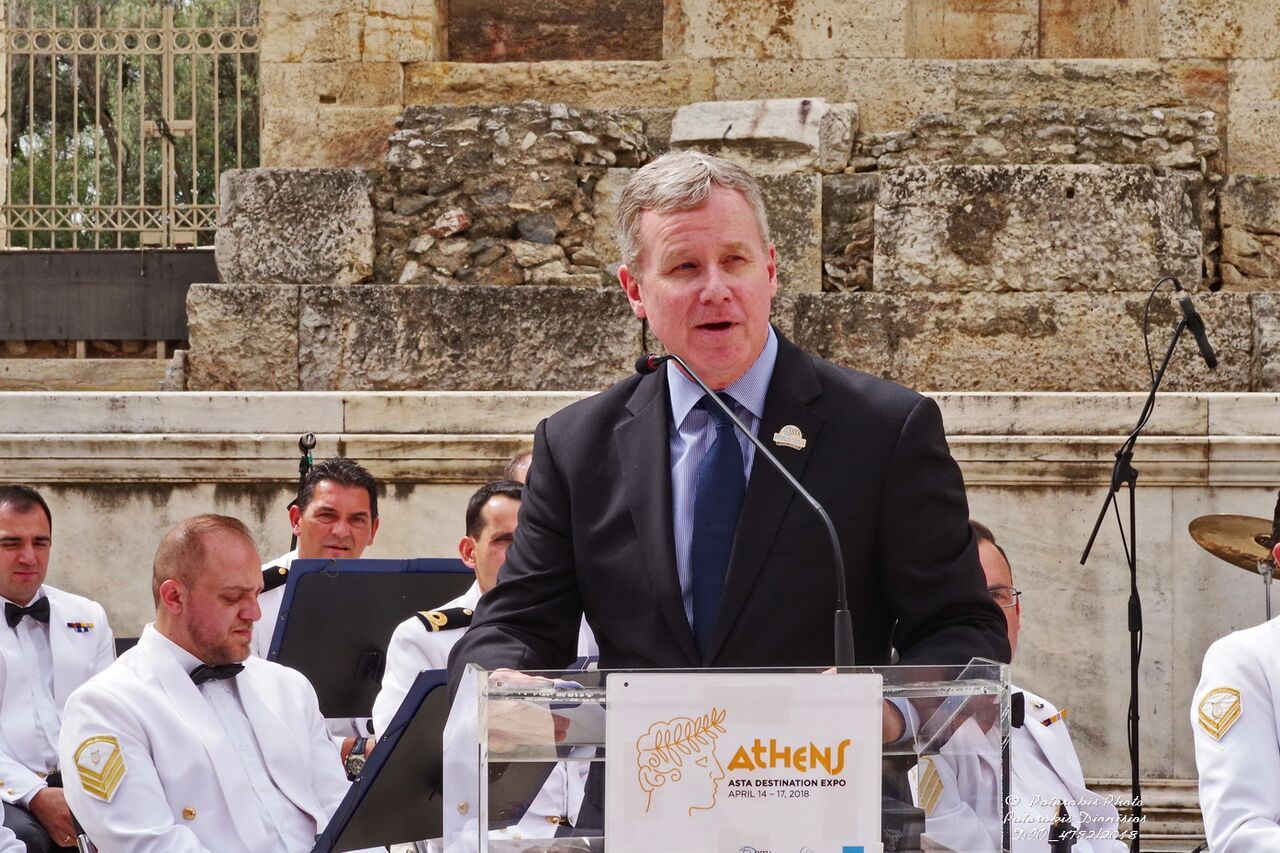 Agent education high on agenda
ASTA was last in Greece in 1987, and dozens of agents interviewed by Travel Market Report said this was their first trip back to the country in 5-10 years, noting that their most recent exposure to Greece had been as a port stop on a Mediterranean cruise. Others said it was their first trip to Greece ever.

“Many agents tell me their experience is mostly stops on cruise ships, not direct stops,” said Kountoura in her opening remarks.

It has been five years since Lynda Phillippi, owner of Renaissance Travel and Events, Portland, Oregon, has been in Greece, “but it was just a series of quick port stops on a cruise that also included Italy,” she said. She was looking forward to getting deeper into the country’s lesser-known destinations, and was planning to take a post-expo fam to Corfu and Albania.

For Lisa Sheldon, owner of I Do Island Weddings, Janesville, Wisconsin, and executive director of the Destination Wedding & Honeymoon Specialists Association, the ASTA Destination Expo was her inaugural trip to Greece, a country she does not book often for her clients. She was booked on a post-fam journey to Santorini.

The tourism ministry and local industry suppliers say they are looking to invite more Americans beyond islands like Santorini, Mykonos and Greece’s capital Athens, to smaller, lesser known islands, as well as the country’s mountain and wine regions.

However, several suppliers told Travel Market Report that they have yet seen a concerted national marketing strategy to accomplish this goal.

“We need a plan if we are going to get more Americans to visit these beautiful islands they have never heard of, trips that would create those wonderful experiences that would help us sell all Greece has to offer,” said Kasi Turpin, with destination specialist, Greece a la Carte, based in Athens.

ASTA was last in Greece in 1987, two years after then president Ronald Reagan warned Americans not to travel here, after several skyjacking and hostage-taking incidents. A State Department's advisory against travel to Athens was issued June 18, 1985, after TWA Flight 847 was hijacked en route from Athens to Rome, then lifted about a month later.

Ambassador Pyatt called on the agents in attendance to take the message home that Greece is a “very safe and welcoming destination,” and urged agents to get beyond its more popular venues. “I invite you to collaborate to brand and package these fresh Greek tourist experiences. These local communities want more American tourists,” Pyatt said.

Do Your Clients Know What 'Quarantine' Means to Their Travel Insurance Coverage?

Travel advisors and travelers need to be clear: Stay at home orders don’t qualify for claims.

In the third of TMR's MasterAdvisor series, Classic Travel Connection's Christen Perry talks about how she went from educator to agency owner, and the importance of finding, and working with, your ideal customer.

Supplier vouchers and travel restrictions add to uncertainty about how to obtain proper travel protection.

Advisors Will Be a Leading Force Post-COVID

With so much uncertainty regarding travel, advisors’ expertise and connections may be more important than ever in helping stimulate the industry’s recovery, and put future travelers at ease.