Royal Caribbean Cruise Line debuted plans today for its 25th ship in service – and its biggest ever.

Symphony of the Seas, which is set to debut in April 2018 with its inaugural season in Europe, will come into service as the largest cruise ship in the world with more balcony staterooms than its sister ship, Harmony of the Seas.

“We’re excited to introduce Symphony of the Seas, our boldest composition yet,” Royal Caribbean president and CEO Michael Bayley said in a statement. “We set out to create a new level of vacation adventure and deliver the ultimate escape for families of all shapes and sizes.”

When it enters service, Symphony will sail an itinerary that includes Barcelona and Palma de Mallorca, Spain; Provence, France; and Florence/Pisa, Rome and Naples, Italy. It will then head to the Caribbean in November 2018, where it will homeport out of Miami and sail seven-night Caribbean Voyages.

Revamped boardwalk area
Symphony’s boardwalk area will feature a new sports bar called “Playmakers Sports Bar & Arcade” that will span the entire length of the boardwalk. The bar will serve craft beer on tap along with bar food like Buffalo wings and burgers. The bar will also have Ms. Pacman, Star Wars Battle Pod, Ice Skee-ball, and other arcade games. 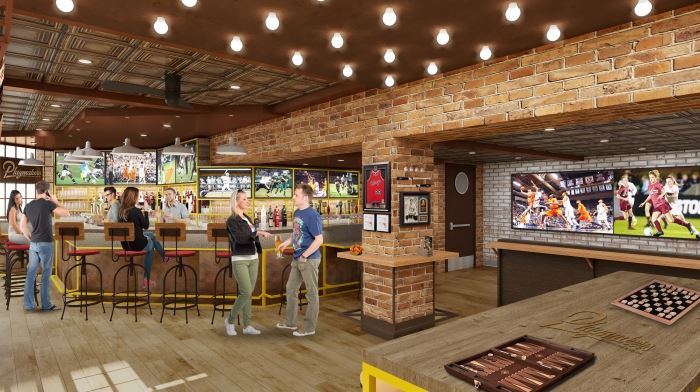 Across the way, a new Sugar Beach candy and ice-cream shop, will feature sweet treats along with family-friendly activities. The boardwalk will also boast a Johnny Rockets, a Royal Caribbean signature. 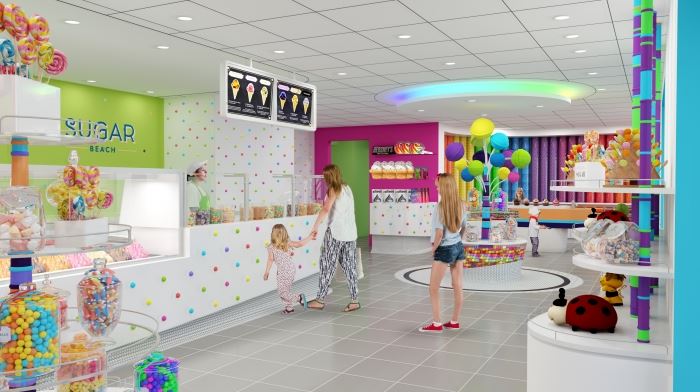 Unique to Symphony’s boardwalk is the ending of the ship’s Ultimate Abyss waterslide, what Royal calls “the tallest slide at sea.”

New family suite
Symphony will feature “the world’s most adventurous and interactive family suite,” according to Royal.

At two-levels, the suite will include a kid’s only bedroom on the second floor with a slide to the living room down below. The suite will also include a floor-to-ceiling LEGO wall, an air-hockey table, and a separate 3D-theatre-style movie room with a popcorn machine and video game equipment.

The suite also includes a 212-square-foot wraparound balcony that features a bumper pool table, a climbing experience, and a full-sized whirlpool.

Up to eight people can fit in the suite in two bedrooms. Guests staying in the suite will be accommodated with their own private butler, called a Royal Genie, to take care of their needs during a sailing.

Entertainment
“Hairspray,” the musical that first debuted with Royal on Oasis of the Seas, will return on Symphony with “a total refresh.” It will be joined by a brand new original show, “Flight,” a satire of the history of the air travel industry, and “HiRo,” a new aqua show in the Aqua Theater open-air amphitheater. 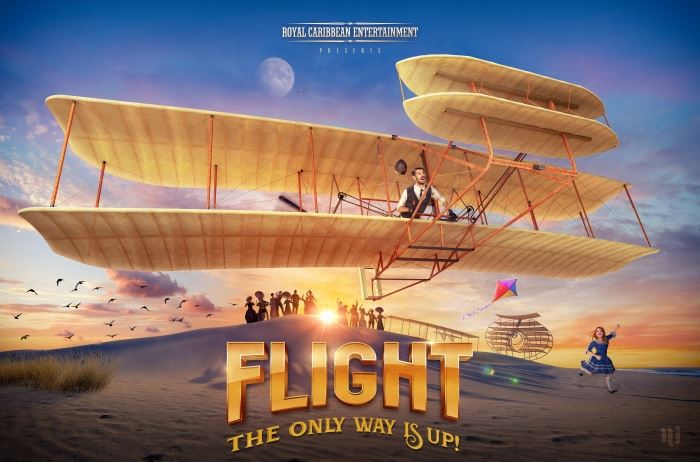 Other entertainment offerings will include a new time-travel adventure Studio B and an ice-skating show, “1977,” which takes place around the heist of the Queen of England’s Crown Jewels in London at the Silver Jubilee. Studio B will also play host to an ultimate laser tag arena.

El Loco Fresh, an open-air restaurant in the ship’s sports zone, will offer tacos, burritos, and other Mexican made to order. 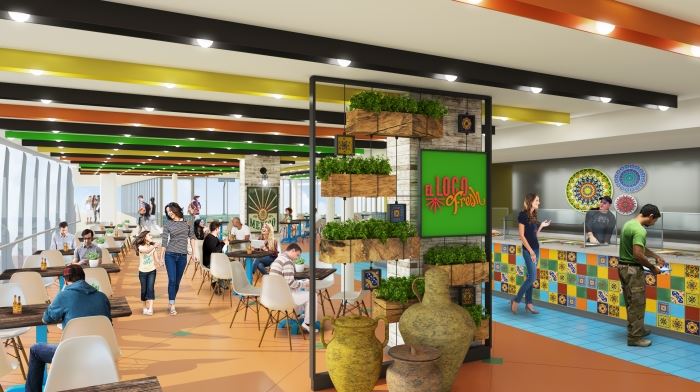 A rendering of Loco Fresh.

Other Royal signatures, including Wonderland Imaginative Cuisine, Jamie’s Italian by Jamie Oliver, 150 Central Park, Park Café, and Izumi Hibachi and Sushi, will also be onboard.

Mobile Check-in
For the first time on a Royal Caribbean ship, guests will be able to bypass the counter at check-in through a new mobile check-in process that employs a combo of facial recognition, bar codes, and beacons.

Guests will be able to create their cruise account before getting to the cruise terminal. Once they arrive to board, all they’ll have to do is go through security and then head to their stateroom, where a key will be waiting.

“When COVID hit, there was an opportunity to respond or react. We really feel that we responded not just react. We were able to do things, create the change, and really respond to what was happening.”

5 Insights on How COVID is Impacting the Industry

1. Latent demand for travel.
2. Travelers want to travel but feel restrained.
3. The working-from-anywhere trend could blur the lines between leisure and business travel.
4. Non-price factors have become more important to customers.
5. Rather than trusting sentiment data, other leading indicators can help pinpoint recovery.

Travel advisors are choosing these properties first and foremost for their social distancing protocols.

The CDC’s “no sail” order on all ocean cruise ships sailing in the United States is in effect until at least Sept. 30.

The line will continue to protect travel professionals’ commission on the original sailing that is paid in full and cancelled by Disney Cruise Line.

Carnival Corp. on Monday announced that Sun Princess and Sea Princess have been sold to undisclosed buyers and will leave the Princess Cruises’ fleet.

Cruise lines hope that with the new protocols, they will be able to resume sailing sometime by the end of 2020.