Editor's Note: Headquarters Happenings is a regular feature that keeps you updated on the major travel agencies, host agencies, travel agency consortia, cooperatives, travel networks and franchise groups. Top executives detail how their groups grow their businesses and how their initiatives can help travel agents succeed.

Expedia CruiseShipCenters is looking for a few good leaders––262 of them, to be precise. That’s how many new franchise owners it needs to meet its goal of more than doubling its cruise agency store locations by the year 2020. And to be clear, it wants those new franchisees to be leaders––sales team leaders––more than travel sellers.

Matthew Eichhorst, president of the 30-year-old franchisor, has no doubt Expedia CruiseShipCenters will meet its growth goals. The company offers a “proven system” that allows its franchisees to grow “profitable and valuable” storefront agencies, he said, quoting from its mission statement. And interest among potential franchise owners is high.

The market opportunity is there too, especially in the United States, where Canada-based Expedia CruiseShipCenters is focusing its expansion. “Coming into the U.S., there’s more opportunity,” said Eichhorst. Also fueling his optimism is the rate of cruise industry growth, with dozens of new ships coming online and an expected 10 million new passengers on the horizon.

Expedia CruiseShipCenters’ growth plans were top of mind for Eichhorst when he spoke with Travel Market Report, not long after wrapping up the annual national conference in early April. It was held aboard the Celebrity Reflection, under the theme Leading the Way.

The other third of its stores are in the United States, and the franchisor intends to grow that percentage to 50% in short order, said Eichhorst, who has been with CruiseShipCenters since before it was acquired by Expedia Inc. in 2007. (Last year, he was named global cruise leader for all of Expedia.)

ExpediaCruiseShip Centers boasts 4,750 travel agents, counting both franchise owners and the independent agents, or vacation consultants, who make up their teams. In 2016, they generated CA$740 million in sales (about US$560 million). About 41% of “mature” store owners have multiple locations, and the average store has about 25 independent agents.

By design, nearly all Expedia CruiseShipCenters franchise owners are new to the travel industry when they sign on. Eichhorst said that’s because experienced travel sellers are likely to have a hard time adopting the franchisor’s way of doing things. “We have a system, and the system works,” he said. Like most franchises, it “almost runs as a corporate entity,” with look-alike stores and franchisees united on a shared technology platform.

Instead of seeking new owners who have industry experience or deep skills in any one area, the franchisor looks for individuals with strong leadership qualities who are prepared to focus on recruiting and training new agents. Nor does it expect its store owners to become top-selling agents. The business model describes franchise owners’ prime customers as their independent travel agents, and consumers as the prime customers of the agents.

Devoted to cruise
Vacation consultants for Expedia CruiseShipCenters franchises can expect to earn top-tier commissions thanks to the company’s volume, as well as additional revenue selling Expedia.com’s non-cruise products. They also gain access to the franchisor’s group inventory on 2,000-plus sailings.

Franchise owners and their agents also benefit from a comprehensive digital marketing program that provides personalized websites and access to Expedia CruiseShipCenters’ promotions. “We have about 4 million people in our in database. We use all those contacts and execute a pretty sophisticated marketing system online,” Eichhorst said.

Owners and agents also do their own local marketing, especially in their spheres of influence, such as local golf communities and church groups.

Unlike some other cruise agency groups, Expedia CruiseShipCenters remains devoted to cruise, netting about 65% of its sales from cruises and 23% from hotel add-ons. “We don’t chase the non-cruiser from a marketing perspective,” Eichhorst said. But if customers want to try something other than a cruise on their next vacation, Expedia CruiseShipCenters will service them fully – and indeed, having access to Expedia.com’s enormous non-cruise inventory is a “huge differentiator.”

Franchisees reap the branding halo effect generated by Expedia Inc.’s outsized presence and its $3 billion annual marketing budget. The travel giant also invests about $1 billion in technology every year; that gives Expedia CruiseShipCenters access to great hotel, air and activities booking engines “so we can really focus on spending in the cruise space,” Eichhorst said. 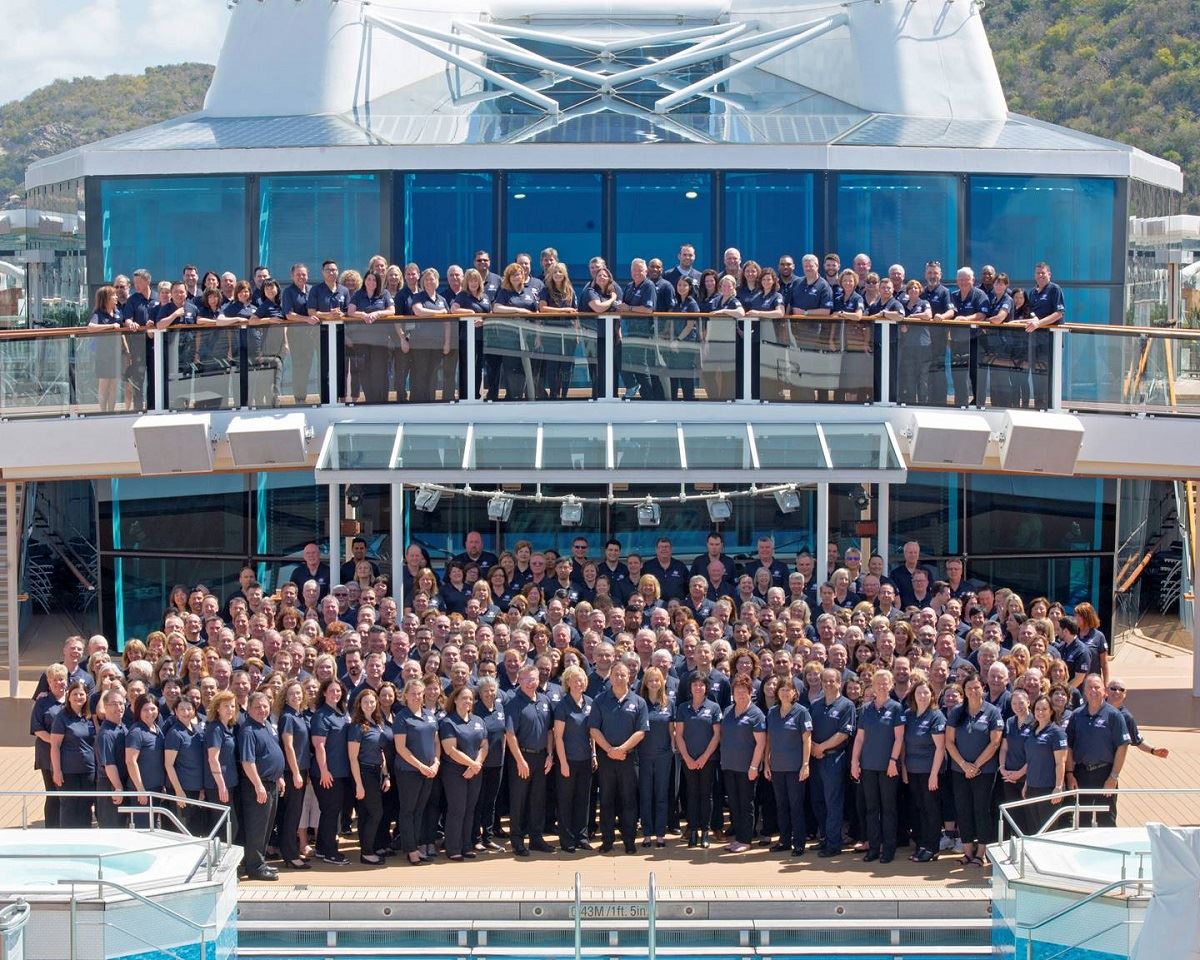 Expedia CruiseShipCenters' franchisees celebrated the organization's 30th anniversary during this year's national conference at sea, aboard the Celebrity Reflection.

Developing the team
Among the Expedia CruiseShipCenters programs that franchise owners prize most, according to Eichhorst, is its technology platform. Of particular value are detailed analytics at the store level. “For example, they see their team profile of, say, 25 agents, divided into four quadrants: growth potential, top producers, low producers and growth risk. We have metrics and coaching programs for each of those segments, so they can change the way they lead.”

Looking ahead
At this year’s national conference at sea, nearly 400 participants celebrated Expedia CruiseShipCenters’ accomplishments over its 30-year history, then turned their attention to “leading the way” into the future.

The conversation revolved around how to be more customer-centric so that franchisees provide “the best research experience, the best purchase experience and the best service experience” for consumers. “That’s really how we’re going to differentiate ourselves,” Eichhorst said. “The other big thrust is how do we combine high tech with high touch.”

While franchisee owners said they worry about keeping up with the pace of change, Eichhorst is most concerned about maintaining the culture of Expedia CruiseShipCenters amid rapid growth.

“How do we think big but act small to keep the culture of that close-knit family? I think our system works. My number-one thing is how do I keep this organization as fantastic as it is?”

The comments include support for the “overall spirit” of the proposal while voicing concerns about how it could impact its members.

Forbes Says ‘You Need a Travel Advisor in 2023’

Plus, advice on how consumers find advisors.