Normandy, France – Last week was a great time to be in Normandy. The Parisians were on vacation; the weather was in the 70s and mostly sunny; the flowers in full bloom made the scenery look like a Monet painting come to life. Even the bad news swirling about us—of terrorists in Barcelona and Nazis in the United States—made our day on the beaches of Normandy, and the memory of the men who died fighting for freedom here, all the more meaningful.

In short, the stars were aligned for the special food-and-wine themed Connoisseur cruise aboard Uniworld’s S.S. Joie de Vivre. And the trip did not disappoint.

The fourth and newest of Uniworld’s class of Super Ships, the Joie de Vivre offers many updates. She is the first to sail the Seine; the first to feature two presidential suites; the first to offer multiple dining venues, including an exclusive wine cellar where small groups can have wine-and-food pairings and cooking lessons with the chef. It is the only ship to offer a Progressive Dinner, where guests get a tour of the insides of the ship with a tasting menu at each stop, from the wheelhouse to the kitchen. And it’s the first to have Uniworld’s new generation of “transformative spaces” – the spa and pool transform into a dining venue in the evening, as the floor rises above the water level and is set with tables for dinner. 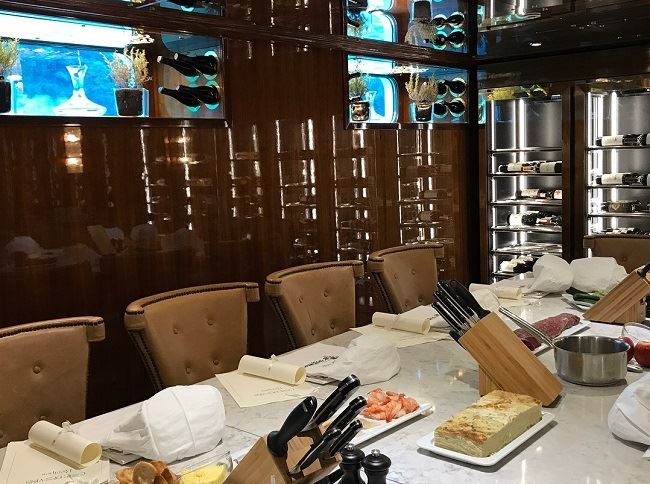 All the innovations work pretty well. Being within walking or biking distance of the Eiffel Tower and the Bateaux Mouches, though not down the most picturesque of roads, makes these top attractions easily accessible on the day we arrive and the day we depart. The cozy Bistrot in the back brings the feel of Paris on board and offers a colorful alternative to the main dining room, with a French-themed menu that includes a delicious signature cassoulet as well as a quick sandwich between meals.

Our trip was a special Connoisseur cruise, part of a series on various Uniworld itineraries in France that focus on food and wine. On top of the normally high standards for food and wine, we also got Lobster Thermidor and some fabulous wines, like the Châteuaneuf-du-Pape and the 15-year-old Mas Amiel; a visit to Julia Child’s favorite Paris restaurant; and an insider’s tour and a taste of Calvados at a working cider farm in the countryside.

(Best line of the trip:

Q: What do the French call a meal without wine?

The fact that it was a Connoisseur sailing attracted many of the guests, including one couple with whom TMR spoke. Asking to be identified only by her first name, Melodie said she discovered Uniworld, a company she had not previously heard of, last year after hours of online research in preparation their first-ever river cruise. Uniworld referred her to a travel agent, through whom they booked a Christmas Markets itinerary; this year they are on back-to-back eight-day Connoisseur cruises on Paris and Bordeaux itineraries. “I love the idea of making a ship your hotel,” Melodie said. “Otherwise, there’s always the checking in and the checking out to deal with, which ends up wasting so much of your vacation time.”

She also was a little frightened by the terrorism last year, she acknowledged; “with all the incidents in the past year, I wanted to be able to see land.” She took a self-defense course in preparation; on the cruise she chose only bus tours as excursions and never got off the bus.

But as our trip came to an end, she is glad she came, and glad she took the Connoisseur cruise. With no extra charge it is a great value – and “we figured, we are in France. It’s all about the food and the wine here.”

Indeed, despite the concerns in the industry about Europe as a whole, and France in particular, Joie already was almost 90% full, mostly with repeat Uniworld cruisers, at its launch in April, Uniworld CEO Ellen Bettridge told TMR. Our trip was full, though many were travel-industry players and agents on fam trips, and the staff said the next two sailings are completely sold out.

“There was a lot of noise about whether we should launch in Paris, but it was a very smart decision for us,” Bettridge said. “We stayed for a lot of reasons, including the fact that the Tollman family (owners of Uniworld’s parent company The Travel Corporation) has been doing business in France for 75 years, and they felt it was very important to be supportive.”