Nearly 150 agents converged on Washington, D.C. this week to address their key issues before Congress, and by all estimates, the profession is being heard.

Holding more than 120 meetings with House and Senate staff, agents and association leaders attending the American Society of Travel Agents’ (ASTA) Legislative Day 2018 told Travel Market Report that they felt their concerns were well-received and that they increased the prospect of laws that would benefit both the industry and consumers.

ASTA executives said they were especially encouraged by the record number of participants (147) walking the halls of Congress this year, nearly 50 percent higher than 2017, and double the number of attendees in 2016.

This was the fourth Legislative Day for Dave Hershberger, ASTA vice chair and president of Prestige Travel in Cincinnati, Ohio. He said he was very satisfied with how he and other agents were received this year.

“I have found the receptiveness from the congressional aides to be very high. I'm amazed at their insightfulness and understanding of the issues.  Most of them were very interested in what we had to say,” Hershberger said.

He noted how an aide in Ohio Senator Rob Portman's office, “was able to pull our concerns into the bigger picture and relate how they could/would fit into certain legislative actions.”

“We’re beyond the days of legislators and aides asking ‘Travel agents? Are you still around?’” said Eben Peck, ASTA executive vice president, advocacy, who has participated in four Legislative Days during his tenure.

“Now, it’s ‘Good to see you again. I remember you from last year. Let’s talk about the issues.’ It’s a more advanced and productive discussion than several years ago. The staffers are more up to speed, and we have to spend less time on the issue, and we can move more directly into the ask.”

Another part of this year’s success, Peck said, is that the agents attending have polished their skills, both in their preparation and ability to articulate the profession’s need.

“It’s a higher level of citizen lobbying, and it’s opening doors for us to get things done,” he said. 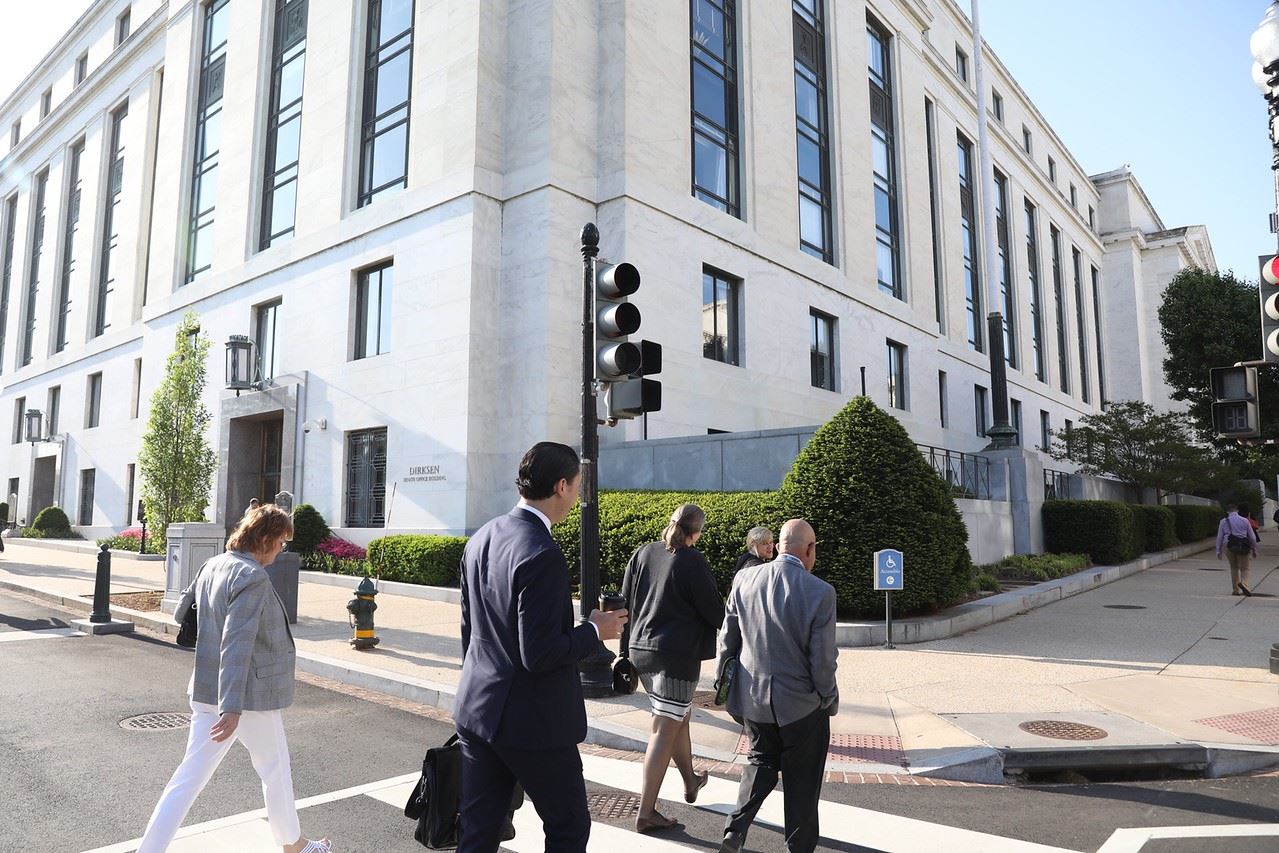 Lesgislative Day participators strolling in front of the Senate Building in D.C..

In an earlier career, Andrea da Rosa, director of marketing communications at Balboa Travel in San Diego spent one-and-a-half years on Capitol Hill as a scheduler in the House of Representatives. This week, she visited with her local representative’s office, as well as several other influential legislators during her busy day.

She said she felt ASTA has been doing a better job each year preparing members for the event and that personally, the more she progressed through her appointments, the more comfortable she became speaking about the issues, and asking for support.

The three key issues ASTA focused on during this legislative session are: limiting travel agents’ need to provide verbal disclosures currently included in the FAA Reauthorization bill before Congress; gaining support for the Travel Agent Retail Fairness Act (H.R. 2515), which would remove agents from a Department of Labor “blacklist”; and harmonization of various federal independent contractor rules.

Attendees took the opportunity to help their Congressional representatives understand the personal impact to them as small business owners, and to their employees, a tactic they were encouraged to employ during sessions the day before their time on Capitol Hill.

Matt Bormet, vice president, Banner Public Affairs, noted how critical it is for agents to both engage in advocacy, and personalize the impact of legislation before Congress given that they are up against larger, better financed voices, like the airlines.

“It’s important for us to go out there and counter the airline measures,” he said.

Agents encouraged to engage legislators at home too
While ASTA and other organizations supporting Legislative Day emphasized the importance of meeting legislators on Capitol Hill, they also reminded attendees that they might find better success setting up discussions with their Congress members at home.

“It’s vital to get time with them back home,” said Greg Scott, president with Merevir Consulting, a lobbying firm. He explained how when legislators and their staff return to their homes for weekends and during recess, they are more connected with voters, less harried by their busy Washington schedules, and more inclined to feel indebted to constituents reaching out to them.

“Here in Washington, your legislators are selling time to you. At home, they are buying time from you,” he said.

There is no better place for a legislator and/or staffer to understand the plight of an agent, than in their office, if your workspace is conducive to a visit, he said.

Top Stories
Advisors Will Be a Leading Force Post-COVID

With so much uncertainty regarding travel, advisors’ expertise and connections may be more important than ever in helping stimulate the industry’s recovery, and put future travelers at ease.

Results from the latest USTOA survey reveal strong demand for travel going into 2021.

After Battling Since 2016, ASTA and Travel Agencies Win ‘Blacklist’ Ruling

Agencies will be exempt from the U.S. Department of Labor's overtime rules—marking another victory for the association and its members.

Now could be the best time for travel advisors to regroup and prepare for the industry's eventual rebound.

In a letter to the Small Business Association, ASTA outlined issues with the PPP program that can be improved to help the trade.