Despite the concern expressed in the consumer and trade press that U.S. travel to Mexico might be hurt this year, a new survey of Travel Market Report’s readers shows sales are headed up rather than down.

The survey, conducted on March 21 and 22, found that despite the politics, the crime, the lingering softness in the economy, and the growth of competing destinations such as Cuba and Central America, most of the 447 travel agent respondents saw their business to Mexico increase over the past year. 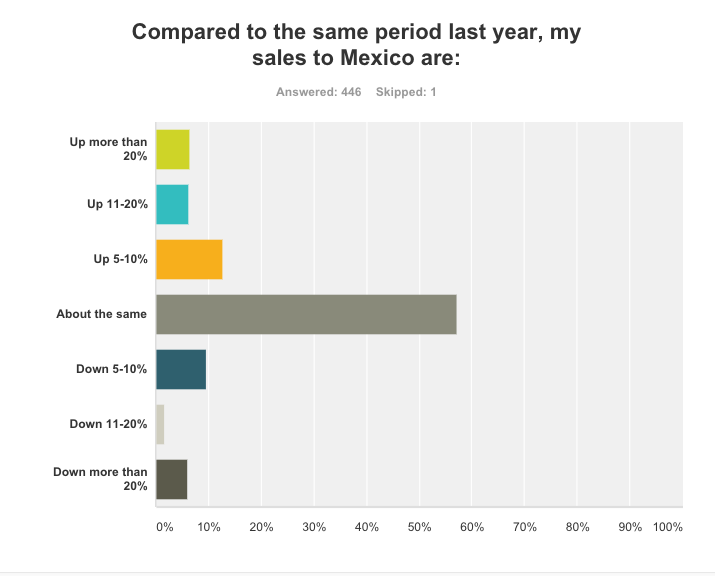 Asked why they think sales are up, the travel professionals cited reduced fears over Zika—and, as one noted, “Our clients love Mexico and its people, and return again and again and again.”

Agents whose Mexico sales are down said their clients were concerned about not being welcome in the current political environment; about their safety; and, for Canadians, about the exchange rate.

Still, the agents said the diversity of Mexico’s product, including value-priced all-inclusive resorts, is adding to the country’s popularity.

Asked which destinations are performing best, Riviera Maya was the clear leader with 84%, followed by Cancun at 68%, Los Cabos, 37%; Puerto Vallarta, 35%; Riviera Nayarit, 19%; Mazatlan, Merida and the Yucatan Peninsula, all 8%; and Mexico City and Ixtapa/Zihuatanejo, tied at 6%. Colonial Cities were mentioned by 4% of the agents.

Among clients who chose not to go to Mexico, the Caribbean (82%) and Hawaii (40%) were the big winners. About one in four customers (26%) vacationed instead in the Continental United States, and 19% headed to Central America or Europe.

Agents said clients under the age of 35 were the most likely to have no concerns at all about traveling to Mexico. No one age group seemed more concerned than the others.

Related Articles
Spotlight on Los Cabos’ Las Ventanas Al Paraiso During its 25th Anniversary
Top Playa del Carmen Beach to Stay Closed for Sargassum Cleanup
Where to Go in 2022, According to the Experts
CBP Postpones Trusted Traveler Enrollment Centers Reopening
7 Standout Resorts Opening in the Mexican Caribbean
Dominican Republic Makes a Comeback as Thanksgiving Travel Hotspot
What Can Advisors Learn from Travelers’ Panic Over Mexico?
Where to Go This Winter Season: Mexico or the Caribbean?
How One Agent Increased Mexico Sales Despite the Negative Press
Mexico Might Be On the Upswing as News Steers People Away from Dominican Republic