With summer approaching and vacation-goers hurriedly marking their calendars and packing their bags, many travelers are wondering if travel to Mexico is safe — considering all the stories in the press about crime there — and if the beach resort city of  Puerto Vallarta is still a viable vacation destination.

According to numerous professionals in the travel industry, much of what has been publicized about Mexico’s safety has been misleading, and they confirm that Puerto Vallarta is one of the safest places in the country for tourists to visit.

“Speaking personally as an agency owner, I’ve been to Puerto Vallarta about 15 times over the years, and it’s definitely one of my favorite places,” said Tom Brussow, president of Sunsational Beach Vacations, and president of the organization Yes to Mexico, a non-profit organization that aims to debunk myths about the country.

He emphasized that, while some places in Mexico are potentially dangerous for travelers, there was little need to be worried. “Our clients are really getting a sense that what they’re reading in the headlines doesn’t conform with reality very well … Once they get down there, once they get to the resort, and they get a chance to meet and understand the Mexican people … they have an amazing time.”

Puerto Vallarta beyond the headlines
One thing many travel professionals have had to deal with in recent years is an influx of misleading information regarding safety in Mexico, including sensational headlines or crime reports that don’t provide full context of the situation.

“I think the media has stirred up pictures of Mexico as an unsafe and risky destination,” said Zachary Rabinor, an American-born travel advisor with Journey Mexico, who actually moved with his family to Puerto Vallarta 13 years ago. “We’ve never felt threatened or unsafe. In fact, I’m a native New Yorker and we actually feel safer [in Puerto Vallarta] than we do in some parts of New York.

“Are there areas of Puerto Vallarta that are a little [less safe] than others? Sure, but in general I think that Puerto Vallarta is an extremely friendly and safe place.”

Despite what a number of headlines have reported, incidents in Mexico involving tourists are extremely few and far between.

“We do talk about [safety] with clients,” said Stephanie Schneiderman, a travel specialist for Tia Stephanie Tours. “We do our very best to help them understand the dynamic and nature of some of the things they hear and read about.”

Occasionally, her clients would come to her with questions of safety, but Schneiderman said providing context often helps to alleviate some of their concerns. “They’re often quite astounded with the gap that exists between what they’ve read and what they’re actually experiencing [when they arrive].”

She added that news about safety for travelers in Mexico is often given without proper context, and that single-dimensional reports are damaging to the reputation of the Mexican tourism industry. “There’s no context to it, they’re not giving the full picture. Media tends to be negative, it’s rarely positive, and I think, historically, the media has tended to have a very, let’s say, problematic approach to covering Mexico.”

By the numbers
Summer vacation travel from the U.S. to Mexico is expected to drop "significantly" this year, according to Allianz Global Assistance, a leading travel insurance and assistance company.

Allianz analyzed customers’ trips planned between May 24, 2019 and Sept. 3, 2019, and found that “Americans are staying closer to home this summer, with all top 10 international destinations in the Caribbean and Mexico for the first time,” said Daniel Durazo, director of communications at Allianz.

Even summer travel to Cancun, the top travel destination for Americans, will drop significantly this year, with just 10.5% going there, compared to 15.7% in 2018. However, Puerto Vallarta, which did not make the top 10 list last year, is currently ranked at number 9, with 3.1% of traveling Americans planning to visit. 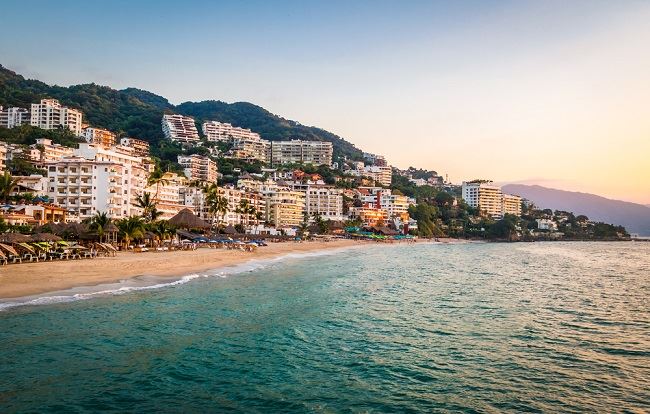 With its luxurious resorts and beautiful scenary, Puerto Vallarta is one of the most sought after vacation destinations for U.S. travelers this year. Photo: Shutterstock.com

Mexico’s defunding of the Mexico Tourism Board, as well as the closure of its international offices are dramatically impacting visitation, at a time when U.S. State Department alerts have spiked due to crime and drug violence, according to a statement from Allianz.

“That’s one of the concerns from our perspective: Are people getting the facts?” said Brussow. “We always want to help people understand what the facts are, and make sure they have the right information. The Yes to Mexico website has a lot of information that can help them to better understand what’s really happening.”

According to Berkshire Hathaway Travel Protection, a travel insurance provider, Puerto Vallarta is a safe destination, and the issues travelers might encounter there are more likely to be minor frustrations and petty crimes, like bag snatching or pickpocketing, rather than a serious danger.

In fact, crime rates there are very low, significantly lower than those of major cities in the U.S. like Miami, Las Vegas, and New Orleans. Violent crime is something that any visitor using common sense should not encounter.

Brussow emphasized that while Puerto Vallarta is a safe destination, certain measures should be taken to ensure travelers don’t face any dangers.

“Just like if you’re traveling anywhere else in the world, you have to take the necessary precautions and use common sense,” said Brussow. “Really rely on the resort. They’re all in gated communities, and the atmosphere and safety levels at the resort are extremely high. We want to make sure people have a happy, safe vacation, and they make the right choices and do not put themselves in situations where something might happen.

“Don’t find yourself at the wrong place at the wrong time. I’d have the same advice if someone was going to New York or Los Angeles or Miami … just practice common sense.”

Here are some tips from the U.S. Department of State, if you decide to travel to Mexico:

It's not in the Caribbean or Mexico.

Starting tomorrow, British Airways will be operating out of Terminal 8 instead of its old home at Terminal 7.