Carnival Cruise Line today unveiled some more details of its newest ship, Mardi Gras, which is set to sail starting in summer 2020.

The ship, which is already scheduled to feature the first roller coaster at sea, will boast some one-of-a-kind features in its balcony, oceanview, and interior staterooms that were created through a partnership with DCA Design International. Aside from some aesthetic details that include muted turquoise hues, those features will give guests more storage space than ever, and give them easier access to power outlets.

The staterooms will feature floor-to-ceiling glass sliding doors on almost of its verandahs. The staterooms will also include sofa-beds that flip from bed to couch and foot stools that open up for in-cabin storage. Guests will also be able to take advantage of other in-cabin storage options including two pull-out bins, a sliding shoe rack, folding shelves, and under-the-bed luggage storage.

Say hello to your newly designed stateroom on Mardi Gras! Here’s a sneak peek at the top 5 features of all balcony, ocean view and interior staterooms. #ChooseFun #CarnivalMardiGras pic.twitter.com/xJ47MKZjkd

Each cabin’s mini-fridge will boast a see-through door so guests can look in to see what’s inside without opening it up.

Guests will also be able to charge all of their devices in-cabin with more power outlets and USB connections both in their vanity and by their stateroom bed. The bed will also incorporate an attached reading lamp.

Mardi Gras, which is named to pay homage to the first-ever Carnival ship that entered service in 1972, is set to sail a schedule of six- to 15-day itineraries through Europe and the Caribbean starting in summer 2020. 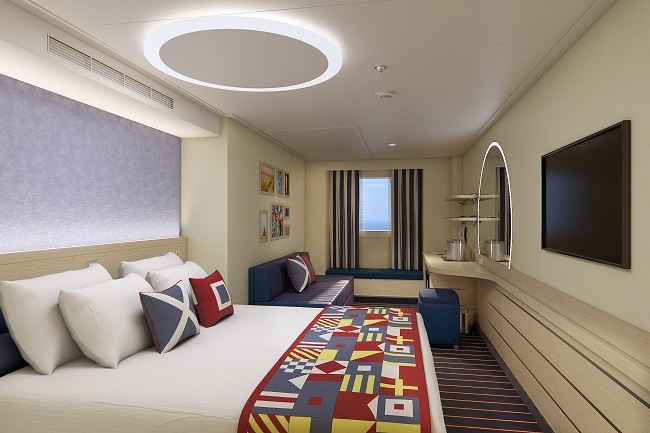 Carnival Corp. made two major personnel announcements this week as it gears up for its eventual return to regular operations.

The German-based cruise line will resume operations with eight roundtrip sailings from Hamburg.

The partnership between two cruising giants aims to move the industry forward during the unprecedented time caused by COVID-19.