Holland America Line’s new MS Koningsdam, which was christened on May 20 during a ceremony in Rotterdam, is the company’s largest vessel, displacing 99,500 gross registered tons and carrying 2,650 guests (double occupancy). But it also marks a revolution of sorts as Holland America tries to appeal to a new set of guests, while at the same time satisfying its repeat customers.

Koningsdam, the 14th vessel in Holland America’s fleet, is the first of a new Pinnacle-class for the line, and the first vessel launched since Nieuw Amsterdam in 2010. It will get a sister ship in 2018 when the Nieuw Statendam is launched. While Koningsdam has many of the features of previous vessels, it adds on a whole new layer of dining and entertainment options aimed at guests who are more active and interested in new experiences.

Holland America officials say the difference in that guest is more psychographic than demographic, but clearly some of the new features appeal to at least a slightly younger set of customers. Here are five ways Koningsdam is changing the paradigm for Holland America.

1. A more modern design
Constructed in Italy’s Fincantieri Marghera shipyard, Koningsdam was designed by Adam Tihany, the famed hospitality interior designer famous for restaurants and hotels. Tihany has created a much more sleek and modern look for the ship’s interiors, inspired in part by musical themes.

The main four passenger decks (4-7) are named after composers (Beethoven, Gershwin, Mozart, Schubert) and much of the artwork in the stairwells and passageways is influenced by music. Indeed, Koningsdam looks very little like previous Holland America ships, with its metallic finishes and brilliant colors.

2. More centralized dining and entertainment
Koningsdam’s main dining and entertainment venues are centered on decks 2 and 3. Deck 2 is the ship’s central hub, starting with the World Stage in the bow (the ship’s main theater) and carrying through to Billboard Online lounge. Lincoln Center Stage, located just across from Billboard Online, features classical music programmed by Lincoln Center. The same area has two other small lounges—Explorer’s Bar and Notes Bar, which features signature whiskies and single malts.

Moving toward the stern on Deck 2, guests will find a series of shops. That’s followed by the Queen’s Lounge, a two-level performance venue that doubles as BB King’s Blues Club. There’s also the Ocean Bar and the Pinnacle Grill, which border a fairly small atrium (only three decks high).

Then there’s the new Sel de Mer French seafood bistro, followed by the Culinary Arts Center, now recast as a restaurant as well as a food demonstration venue, and Blend, where you can blend your own wine or have a private group dining experience. In the stern is the Dining Room, a lavishly decorated, two-level main restaurant. Effectively Deck 2 has most of the main lounges and dining venues on the ship, and it remains the center of nightlife.

3. Larger pool and spa facilities
From the bow Lido Deck 9 features the Greenhouse Spa & Retreat, a much larger spa than on previous Holland America ships with a fitness center, salon, relaxation area and small pool. The main pool has two hot tubs and a stage, as well as an LED screen to show movies at night. A magrodome can cover the entire pool area in cold or inclement weather.

In the stern on Deck 9, just aft of the Lido Market, there’s an adult pool with two hot tubs and lots of deck chairs. There is much more space in the higher decks for sun seekers, both in the stern and toward the bow. 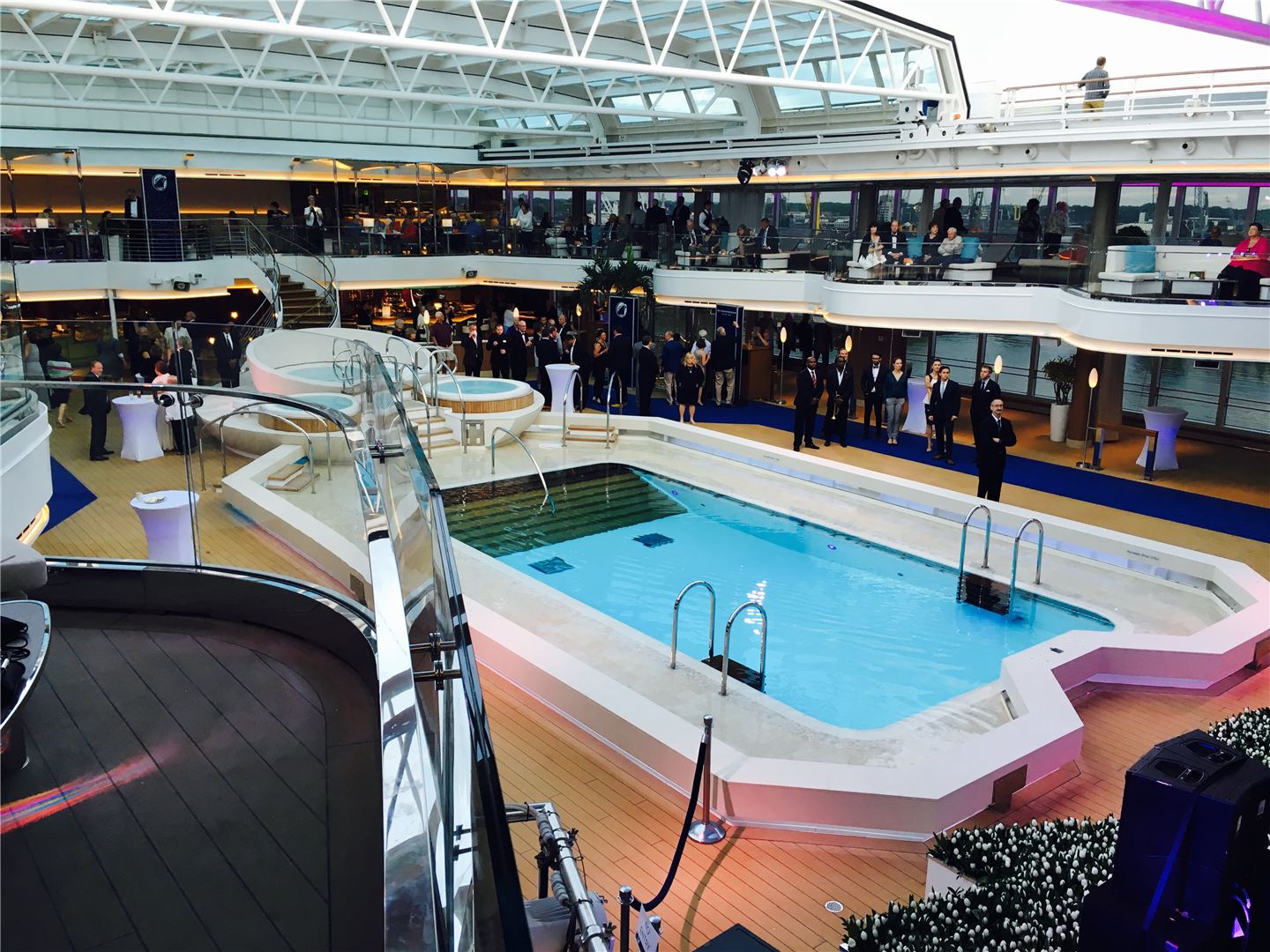 The ship features a larger pool under a magrodome and more sun decks.

Previously the Culinary Arts Center was used only for cooking demonstrations, but now it’s evolved into a full restaurant (reservations and extra charge required). But it was getting great reviews from guests who experienced it on the inaugural cruises.

Wine connoisseurs and those aspiring to be like them can experience the art of winemaking at BLEND. In collaboration with Chateau Ste. Michelle, Washington State’s famed winery, this venue, located directly across from the Culinary Arts Center, allows guests to blend their own wine and enjoy it at dinner.

There are also new dining options poolside, including a gelato station; a Dive-In burger and hot dog stand just to the stern of the pool; and a New York Deli & Pizza outlet, serving classic deli favorites and made-from-scratch individual pizzas.

Other popular Holland America dining venues remain in place, such as the Pinnacle Grill, which now includes a special “Taste of De Librije” evening featuring the cuisine of Holland America Culinary Council member and three-star Michelin Chef Jonnie Boer of the Netherlands. Other dining venues include an expanded Canaletto Italian restaurant in the Lido Market area and the popular pan-Asian restaurant Tamarind, first introduced on Eurodam more than a decade ago. 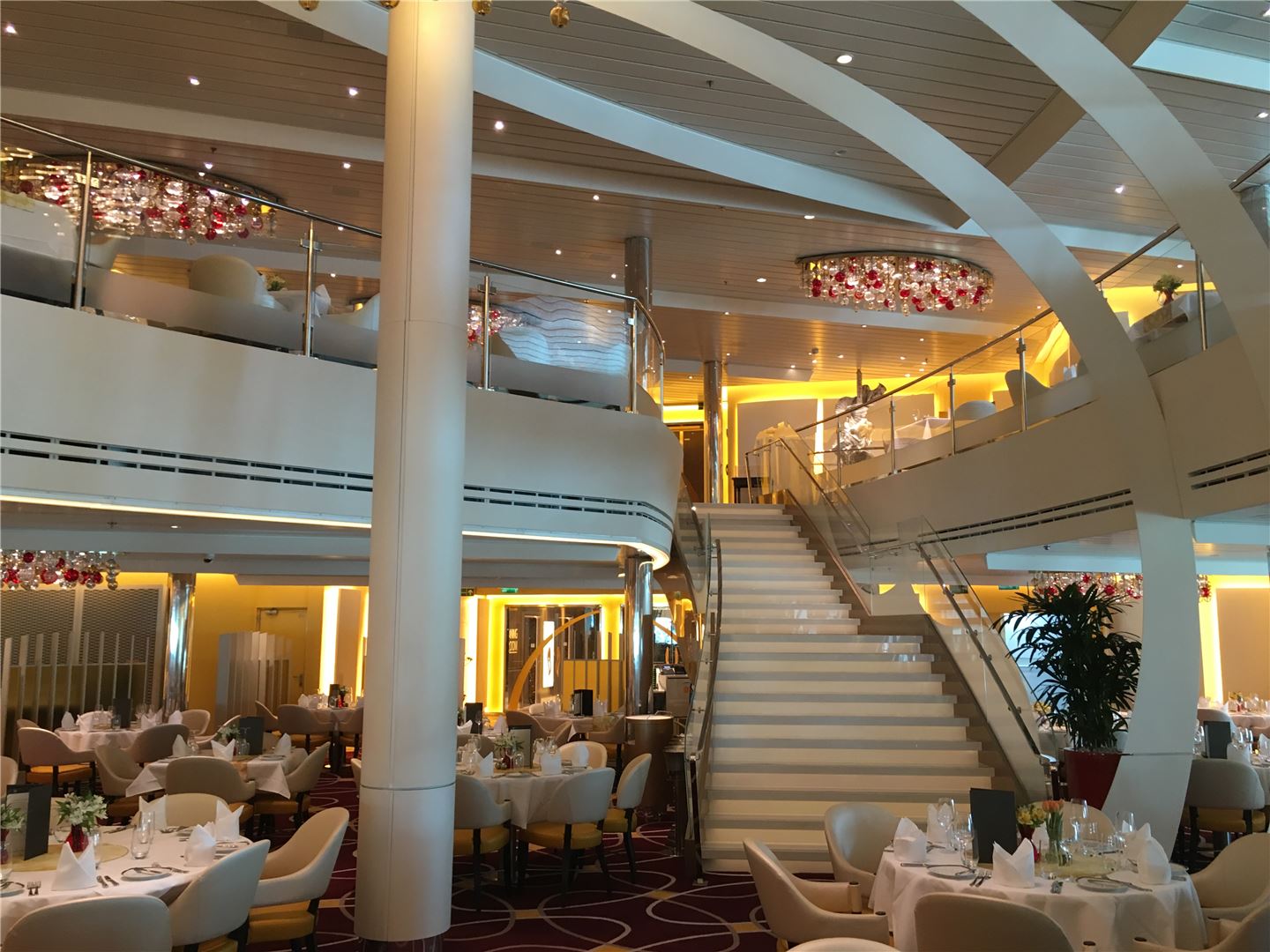 5. More music and entertainment
Onboard entertainment includes a Music Walk area on Deck 5 showcasing such venues as Lincoln Center Stage, a live music venue created in partnership with Lincoln Center for the Performing Arts, which features an ensemble performing classical chamber music during afternoon recitals and at night.

Just across from Lincoln Center State is Billboard Onboard, a lounge that showcases live musicians, including two pianists, a guitarist and a DJ, who take turns performing different genres of music as chronicled by Billboard.

Other new entertainment concepts include the 270-degree LED projection at World Stage, which immerses the audience in panoramic visual and sound effects. Koningsdam also features informative entertainment from BBC Earth, where guests can learn about the ocean and natural world through concerts, films, and shows on the World Stage. The BBC Earth program rolled out across Holland America’s fleet in April 2016, starting with the Koningsdam.

Many of the new dining and entertainment concepts are already available on other Holland America ships. But Koningsdam is the first purpose-built vessel that puts them all together on one ship. Holland America’s goal is to raise the bar in dining, entertainment and décor in order to attract a new generation of cruisers who may have thought the line was still catering to older baby boomers and seniors.

The new rules apply to all cruises from Los Angeles, Galveston, and New Orleans, along with all sailings out of European homeports.

Princess will maintain two-thirds of its remaining visits to Skagway, Alaska this year, but 10 sailings will need to be changed.