MSC Cruises on Monday announced it would be extended the pause of its U.S. operations through December.

MSC, which has restarted some operations in the Mediterranean, will now look to 2021 to fully restart its North American operations, including its three Florida-based ships: MSC Seaside in Port Canaveral, and MSC Meraviglia and MSC Armonia in Port Miami.

The cruise line is giving all guests on impacted sailings the option of a 125% future cruise credit (FCC) of the original cruise fare that can be used through April 30, 2022 or a full refund.

The line had been hoping to resume with some ships in North America, but the news on Monday, which came on the heels of the CDC’s lifting of its “No-sail” order, now shifts the cruise line’s focus to 2021. It also matches similar decisions made by Norwegian, Royal, and Carnival Corp.

MSC has already been able to return to some European sailings, which kicked off in August, with new health and safety protocols that include universal testing, a cut in capacity to 70%, contact tracing, and more.

The line is currently sailing two ships in the Mediterranean, with MSC Magnifica, one of its Musica-class ships, becoming the second MSC Cruises' ship to restart in late October. MSC Magnifica’s schedule for the rest of the year includes an eight-night Christmas voyage that departs Dec. 18 from Genoa. 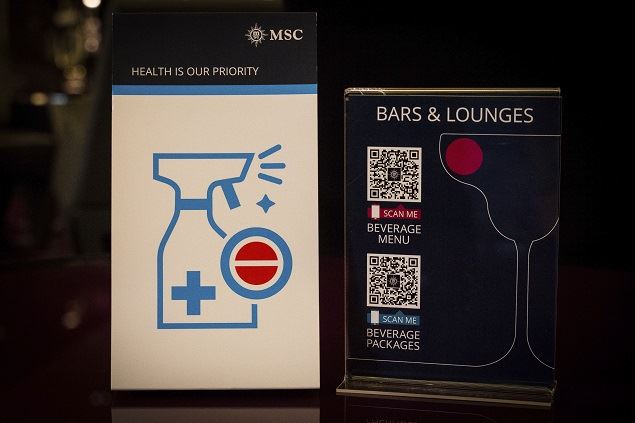 Signage aboard one of MSC ships already sailing in Europe. Photo: MSC Cruises

Clients can choose a pre- or post-cruise tour on 15 sailings throughout 2023.

Savings of up to $2000 per couple on river cruises or up to 20% off on yacht cruises are available.

Except on cruises to specific destinations, cruisers no longer need to be vaccinated or test pre-cruise (regardless of vaccination status).

Here Are the Standard Cancellation Policies for Each Major Cruise Line

Guests can see a new production show almost every night on a one-week cruise.