The Higgins Hotel New Orleans, Curio Collection by Hilton introduces 230 rooms, four restaurants/bars, and 18,000 feet of meeting and event space to the Arts and Warehouse District. But it’s the hotel’s ties to The National WWII Museum that set the property apart from others.

The WWII Museum — New Orleans’s top attraction — is a for-profit institution, with its survival partly dependent on private donations. The new Higgins Hotel, however, will serve as an extension of the museum, with all proceeds used to support the WWII Museum’s mission and programs for the long term.

The hotel is located on the same campus (on Higgins Boulevard at Magazine Street), and was designed to complement the museum experience through its architecture, décor, hotel names and amenities. 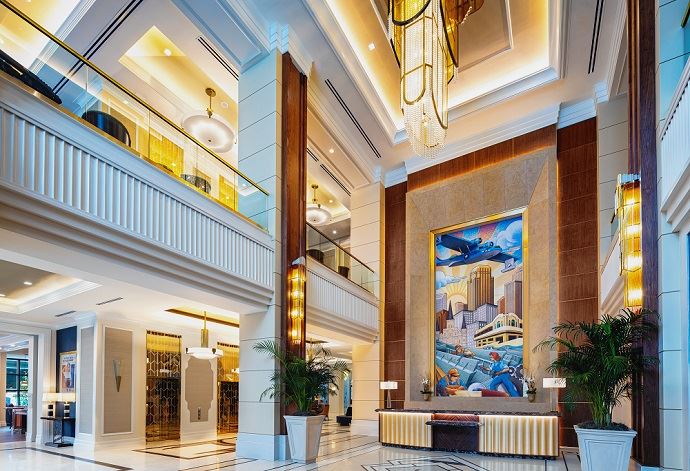 Among the hotel’s iconic pieces are General George S. Patton’s piano; the Higgins Boat Trophy, which was presented to General Arthur Trudeau for his service in the Amphibian Command; and WWII-era art, including a 1943 portrait of New Orleans’s boat-making magnate Andrew Jackson Higgins, for whom the hotel is named. With this and other memorabilia, guests can feel immersed in a unique experience that honors America’s collective memory of WWII and its heroes. 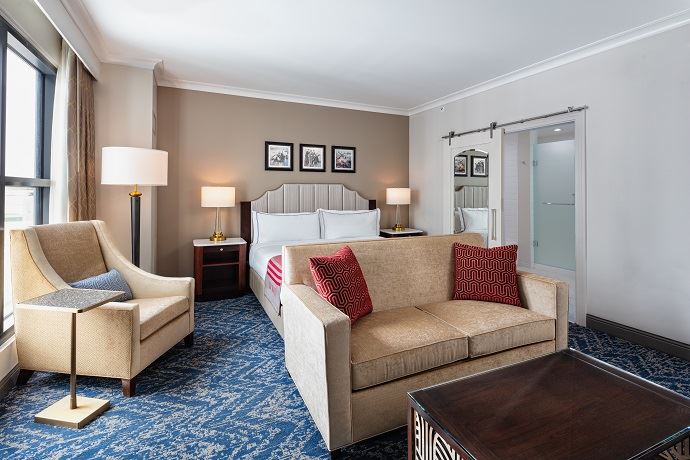 One of the hotel's staterooms. Photo: HH.

Hotel dining experiences also are tied to WWII in various ways. Rosie's on the Roof is an elevated bar with city views, serving drinks named and themed after Rosie the Riveter and her story. Cafe Normandie is the signature restaurant, serving rustic French and Cajun cuisine, and anchored by a large hand-finished mural depicting the beaches of Normandy. In Kilroy's Bar & Lounge, guests can try cocktails and small bites with Southern twists; while Provisions is a grab-and-go lobby café and mini-market.

On the second floor, the hotel will provide much-needed conference space for the Arts and Warehouse District. Among the Higgins’s 14 fully equipped, custom-catered gathering spaces are versatile meeting areas, boardrooms, and an elegant ballroom. There is also a conference center that will host the WWII Museum’s educational programs, including the International Conference on World War II and various symposia — which will livestream directly to guest rooms and public spaces.

Guest amenities include a third-floor fitness center, and the “Patriots Circle” executive lounge, exclusive to Hilton Honors Gold and Diamond members, as well as elite museum members. In each room, the hotel also features a tablet that lists up-to-date details about on-property amenities and events happening in both the museum and the hotel. The bedside tablet also allows for easy in-room dining and other guest services. 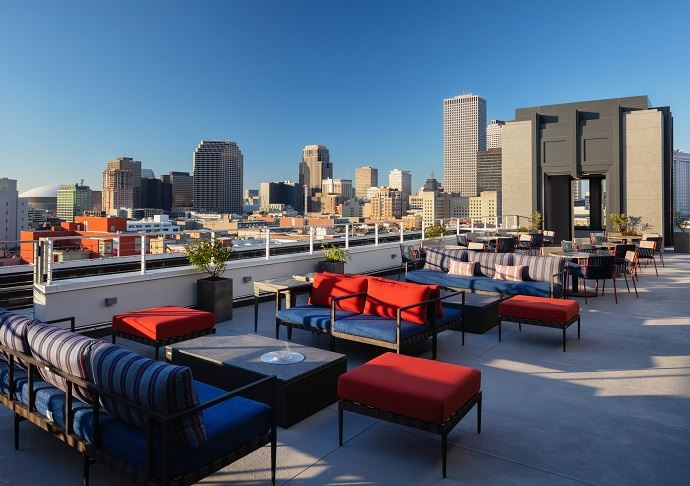 The view from Rosie's on the Roof. Photo: HH.

The Higgins is the first Louisiana hotel to be part of the Curio Collection by Hilton, an upscale, global portfolio of unique hotels and resorts. Higgins Hotel stays come with the benefits of the Hilton Honors guest loyalty program.

Thanks to its prime location, the Higgins is nearby dozens of neighborhood art galleries, the Contemporary Arts Center, Ogden Museum of Southern Art, and the Louisiana Civil War Museum. Guests will find easy access to the historic St. Charles Avenue streetcar line, which ties to New Orleans’s Central Business District, Audubon Park, and the French Quarter (the latter about one mile from the hotel).