President and Chief Executive Officer Andy Stuart and other Norwegian Cruise Line executives and entertainers this week offered a bit of a preview of what guests will experience onboard Norwegian Encore, the new vessel that is set to launch this fall.

This all took place during a press conference at New York City’s Scarpetta — significant because of Norwegian Cruise Line’s partnership with LDV Hospitality — which will bring the restaurant to sea onboard the Norwegian Encore. Onda by Scarpetta, “a new elevated Italian dining experience” touted by the cruise line as “the first of its kind” will make its debut on the Norwegian Encore. Scarpetta has locations in New York City; the Hamptons, New York, Miami; Las Vegas; Philadelphia; Newport, Rhode Island; and London.

During the press conference, attendees were able to get a taste of the Norwegian Encore in multiple ways. Plenty of sustainable bottles of JUST Water were on hand, following Stuart’s announcement about Norwegian Cruise Line’s new partnership with JUST Goods, Inc. The company will replace all single-use plastic bottles across its fleet by Jan. 1, 2020. The initiative will start with Norwegian Encore. JUST Water is 100% spring water, contained in a plant-based carton that is made of 82% renewable materials, says Norwegian Cruise Line.

The cruise line began its onboard sustainability efforts a year ago with the elimination of single-use plastic straws on all 16 ships and its private destinations. Thanks to its latest initiative, Stuart said “there will be six million fewer plastic bottles every year that end up in landfills, or wherever they end up.” He believes Norwegian Cruise Line’s sustainability efforts can inspire passengers once they leave the ship to do the same. “Imagine the power of that,” he added.

At the press conference, in addition to being able to try JUST Water and wines that will be available onboard, many of the dishes that will be on the menu at Onda by Scarpetta were offered for sampling. Those included Braised Octopus, Yellowtail Crudo, Tuna ‘Susci’, Scarpetta’s famous dish Spaghetti Tomato & Basil, and Short Rib & Bone Marrow Agnolotti. In addition to delicious food, the restaurant onboard Norwegian Encore will offer views from inside the restaurant and from its outdoor dining option on The Waterfront. 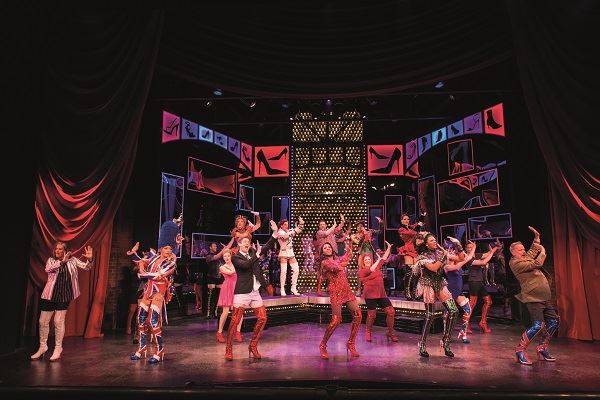 Onboard entertainment will include the Tony Award-winning musical, “Kinky Boots.”

Stuart also spoke about Norwegian Cruise Line’s Encore Moments campaign that was announced last week. The public is being urged to nominate everyday heroes from across the U.S. and Canada. Based on public voting, 64 special people will become winners of their choice of a three-to-five-day cruise for two on almost any Norwegian Cruise Line ship. They will also be invited to, and provided airfare and accommodations for, an awards ceremony in New York City in December.

Guests can see a new production show almost every night on a one-week cruise.

Yet more sailings have been rerouted, delayed or cancelled.

The company will be helmed by industry veteran Larry Pimentel and is set to debut in late 2025.

Both of Viking's expedition ships will be officialy named on September 30.

Construction of Cunard's next new ship is officially underway.