After a series of incidents that drew broad press coverage questioning traveler safety at popular Yucatan beach resort destinations, the state of Quintana Roo has launched an app that it says provides 24-hour services that will help tourists keep themselves safe.

Called Guest Assist, the app includes links and services for emergencies, extortion and kidnapping, robbery, passport loss or theft, roadside assistance, and even a way to lodge complaints for local tourist service providers.

For example, tapping on the “911 Emergencies” portion of the app provides a call button link. The “Attacks on Physical Integrity or Robbery” section of the app offers step-by-step descriptions of the process to report crimes, including a link to file a complaint online.

According to a report at Novedades de Quintana Roo, Quintana Governor Carlos Joaquín announced the Guest Assist app at this year’s Tianguis Turístico 2018.

Novedades de Quintana Roo quoted Joaquín stating that: “The objective is to offer security to tourists, it is one of the main points on the state's agenda,” and that his state considered safety “fundamental” for the local tourism industry’s success.

"I'm glad we can launch this particular platform in Quintana Roo, but later it can also be used by other destinations in Mexico,” Joaquín said, during a live Facebook broadcast last week. 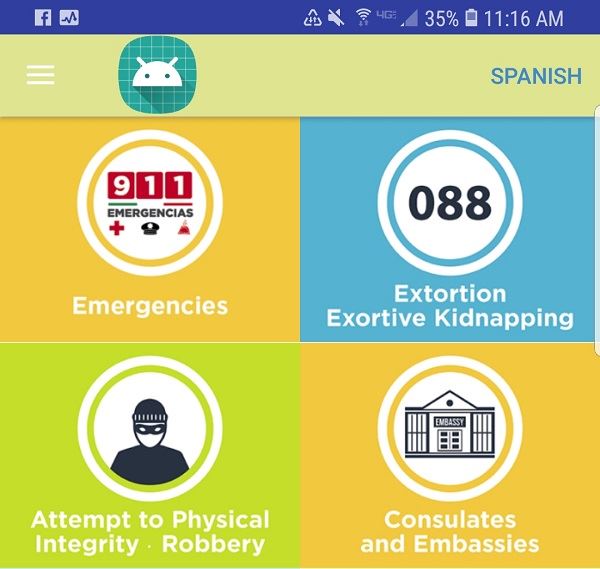 “This appears to be an incredibly useful app for tourists both national and foreign,” said Trenia Logan, who owns Querencia Travel Consulting in Rushville, Indiana. Logan also owns a travel agency specializing in visiting destinations beyond Mexico’s popular resort locations. “There are 11 WiFi hotspots in Quintana Roo that allow the app to work even if your phone doesn’t have data,” she said.

“Another good point to note is that it’s a very simple platform without pictures or images that drain data; there will not be any offers or ads either. It will connect tourists with 11 different safety nets, ranging from private and government organizations from 911 to federal police to traffic assistance.”

In the end, Logan added: “An app is only as good as what is behind it. In this case, Guest Assist is backed by a 24/7 call center that will have multilingual staff who can act as dispatchers to security and law enforcement or medical assistance.”

Guest Assist is one of several measures the state of Quintana Roo is implementing in response to recent incidents, including tainted alcohol, and U.S. State Department advisories against traveling to the region following a bombing on a Cozumel ferry service.

The first initiative launched was the creation of the Directorate Tourist Assistance, a unit within the Ministry of Tourism, to guide visitors who have a problem within the state.

5
" "
Related Articles
Top Playa del Carmen Beach to Stay Closed for Sargassum Cleanup
Where to Go in 2022, According to the Experts
CBP Postpones Trusted Traveler Enrollment Centers Reopening
7 Standout Resorts Opening in the Mexican Caribbean
Dominican Republic Makes a Comeback as Thanksgiving Travel Hotspot
What Can Advisors Learn from Travelers’ Panic Over Mexico?
Where to Go This Winter Season: Mexico or the Caribbean?
How One Agent Increased Mexico Sales Despite the Negative Press
Mexico Might Be On the Upswing as News Steers People Away from Dominican Republic
Yucatan Magic, If You Know Where to Find It

The company said it expects, with demand still high, to raise prices in 2023.

The 13-day tour will start with an overnight stay in New York before hosting guests aboard Silversea’s Silver Shadow.

After a more than two-year absence, G Adventures will bring back Bhutan, Australia, and New Zealand tours starting in September.

Many of Monograms' most popular tours are being moved to the Independence by Globus subset of tours.

Three new full-times sales reps and a new senior director of marketing have been added.

Sky Vacations is the latest tour operator to join USTOA.