Andre Van Kets, the founder of the Discover Africa Group, a Cape Town-based ground operator/destination management company, took it upon himself to map out the wilderness areas of South Africa for the Google Street View mapping project.

Van Kets, a self-described hiker and computer geek, joined with South African Tourism in what became the “South Africa in 360” project. He led a team of 200-plus volunteers through major trails in all of South Africa’s 19 national parks and other wilderness areas, to put them on Google Maps “for the express purpose of giving people who can’t get there or haven’t got there yet the chance to virtually explore the place," he said, “as you do in the city with Google.

“This lets people get on the trail, into national parks into places they otherwise wouldn’t. With this technology, someone who is wheelchair-bound can see what it’s like on top of a mountain, or if you’re a travel agent planning a holiday, you can actually go to that spot and see what it’s like. You have the ability to transport yourself there.”

Lucky accidents
The idea began to germinate two years ago when Van Kets was researching 360 cameras for his own purposes. He discovered that Google has an equivalent to its street-view car in a backpack form that can carry Google’s 360 Trekker camera out on trails where cars can’t go.

“They’ve had this a few years,” he said. “They’ve done the Grand Canyon, the Eiffel Tower, and highlights around the world.”

And then Van Kets made one more discovery that set off an explosion in his mind.

“What I discovered is that they have a program that allowed anyone to borrow their Google 360 Trekker camera,” he said. All you have to do is fill out a form online, and Van Kets did it.

“It started as a passion project,” said Van Kets. “I’m a geek. It was not for my business. I didn’t expect to get more bookings if I did this. It’s more about doing my good for South Africa. I’m just another proud South African who loves it and wants to expose our riches to the world. I want to get South Africa on the map. And what better platform than Google?”

When he filled out the form, he didn’t expect to hear anything back. But a couple of months later, he did hear from Google.

“They said, ‘Andre, your application stood out from the rest. Tell us exactly where you want to go and how long you think you need the camera for and how you’re going to make it happen.'” 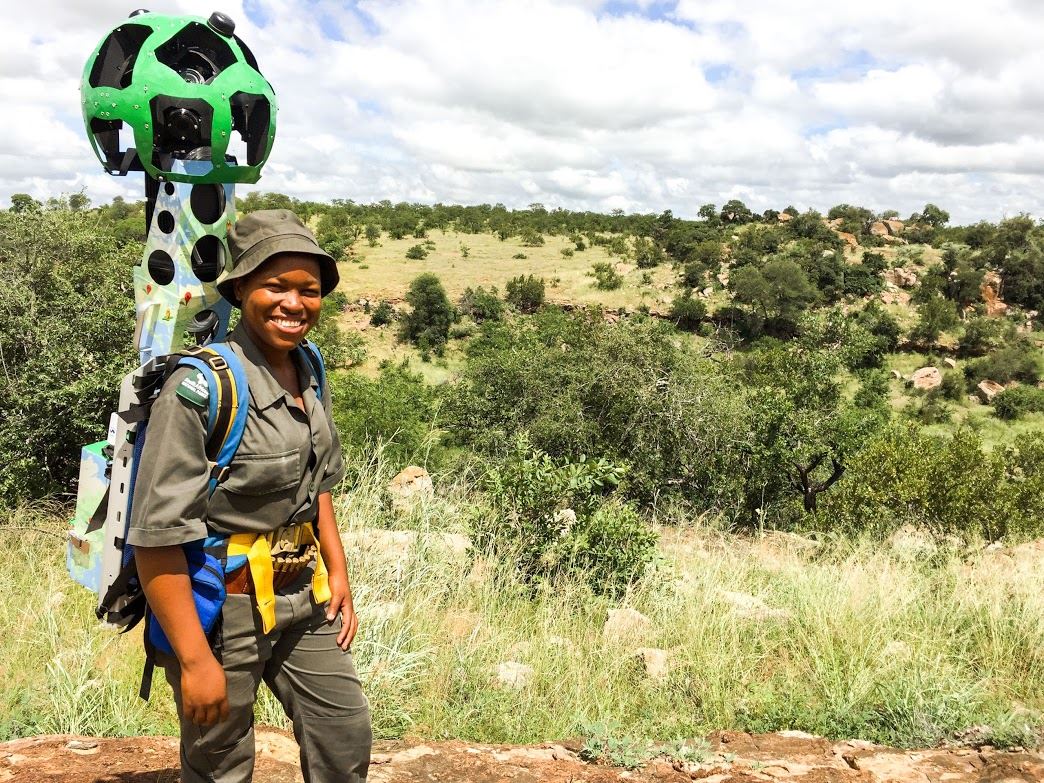 Beware of aliens bearing packages
About three months later, a package arrived by mail at Van Kets’ office, and it was a wonder to behold. He pulled out the Google 360 Trekker camera and it looked almost as if an alien had landed.

“It’s got a GPS device at the top, so we can always track where you are, and 15 cameras in a ball that point in all directions,” said Van Kets. “Every two or two and a half seconds, roughly every step if you’re walking at a steady pace, it takes a still photograph looking all directions. It has the ability to create a sphere, so if you imagine yourself inside a sphere, you can look wherever you want.”

The strange-looking device is mounted on a backpack frame that distributes the weight across the back and positions the camera above the head with a gyro device to compensate for the motion of walking. It weighs about 50 pounds.

It has a hard drive and batteries in the pack and it stores the many photos on the hard drive. Every week or so the photos are downloaded and shipped to Google headquarters for processing.

Google however, was not interested in paying anyone to create the images for Google Maps. According to Van Kets, the deal was, “You get the camera, we’ll insure it, we’ll give you the training, and we’ll give you the backup support. If something goes wrong, we’re there to help. But this is your problem now.”

Friends and friends of friends
Van Kets set about figuring out how to get the camera into the wilderness areas he had in mind. He realized he was going to need a lot of help. First, he tapped a friend who was in training for a bike trip from Cape Town to Cairo. All that walking on the trails of Table Mountain could fit nicely into his training regimen.

As the project got boots on the ground, Van Kets made what he considers the most gratifying discovery of the whole project.

“As my friend was walking along, people he passed asked him, ‘What is this thing?’ When he would tell them they would say, ‘How can we get involved?’”

“What I am proudest of is that everywhere we went in the country, people got involved,” said Van Kets. “It wasn’t just our team, it was people on the ground who got involved and helped us map out their neck of the woods. There’s no way we could have known the best trail in every park. We had 206 people carry the camera.”

Even with all the volunteer support, Van Kets realized he was going to need some financial backing to complete the project satisfactorily.

“I started knocking on doors, having meetings,” he said. "When South Africa Tourism saw the project, they said, ‘That looks interesting.’ It had many elements that appealed to them: Google, crowdsourcing, etc. At this point, we had these photos of everyday South Africans getting involved, working hand-in-hand, from all walks of life, people from disadvantaged backgrounds, and people who had been hiking for many years.”

By a lucky coincidence, South African Tourism had just been working on a project to send a team out on the road to do some video and photography work in South Africa’s wilderness areas to upgrade its image and video database.

“They were re-doing the website,,” said Van Kets, “and they needed some media for that. They said, ‘Let’s do this together and share the expenses.’”

In short order, the collaboration fell together. The partners developed a game plan. For nine months, they would travel South Africa to gather images both for South African Tourism’s website needs as well as to fulfill the project of mapping South Africa’s national parks for Google Maps.

Now it is possible to explore the major hiking trails of South Africa’s 19 national parks via Google Street view, just as it is in the major cities of the world. A travel agent who wants to familiarize herself intimately with a destination can go to Google Maps, zero in on the destination that is of interest, click on the little icon of an orange man to activate the Street View function, then click on the spot on the map that is of interest and be swept down to the ground level to take a look for herself.

“From a trade perspective, first-timers who are moving into the space trying to sell it for the first time can now actually go to that spot and see what it’s like,” said Van Kets. “You can click-click-click and you have the ability to transport yourself there. We can’t do time travel yet, but maybe we can do teleporting.”