Omni Hotels & Resorts this week took a big step forward in its quest to build convention center hotels that are anything but conventional.

With the grand opening of the beautiful Omni Louisville, it showed off the touches that bring a sense of place and luxury, and give even its largest properties more of a lifestyle ambiance than a big-hotel feel.

“We started out in Fort Worth and Dallas and Nashville, and we’re getting better every time, building convention center hotels that are not like convention center hotels, with unique design and incredible service,” said Bob Rowling, founder of TRT Holdings, the holding company for Omni and Gold’s Gym, at the opening on Tuesday. “It’s stunning how spectacular this hotel turned out; it has one thing after another that you are going to love.”

From the chef-inspired restaurants and the massive urban food hall to the bourbon-soaked speakeasy and the magnificent library/bar, this new addition to the Louisville skyline is easy to love.

Incredibly, the hotel opening was pushed up two months as construction ended early and on budget — and the new Louisville convention center is not scheduled to officially open until August. But the hotel already has 50,000 group rooms on the books for this year, Rowling said, and 10 percent of its 226 rental residences are all leased just three weeks after going on the market, at prices from $1,700 to $9,000 a month. For the hotel, 300 rooms were booked in the 72 hours before opening day, and standard rooms are sold out.

Artsy and experiential
It is a beautiful, entertaining, artsy and even experiential property. The design team took the idea of “paying homage to Louisville” seriously — and when you are home to Kentucky bourbon, the Kentucky Derby, Louisville Sluggers, disco balls and Mohammed Ali, there’s a lot to play with.

The legs of the table in the boardroom are shaped like baseball bats; the Mokara spa features a huge disco ball; some of the meeting rooms are named for parts of the bourbon production process; the soaring lobby ceiling is shaped like an oak keg. 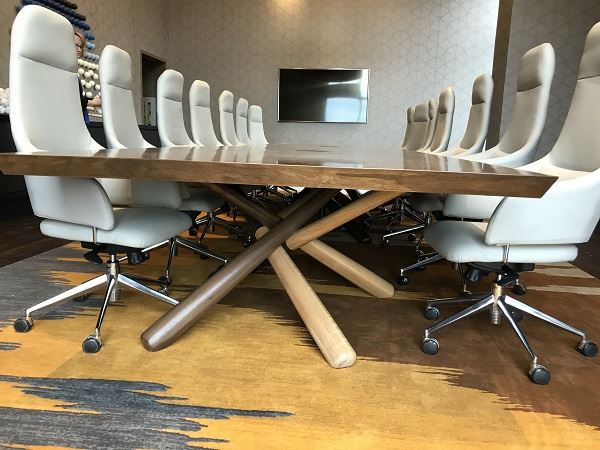 Nick Badovinus’ full-service, on-site restaurant serves foods “tailored to the neighborhood"; there is even a Maker’s Mark Private Select bourbon made specially for the hotel and sold only there, at $180 a bottle. But the “heartbeat of the neighborhood” likely will be the 20,000-square-foot urban market serving gelato, pizza, barbecue and sushi.

With two ballrooms, one at 20,000 square feet and another at 10,000 square feet, the Omni — and Louisville with it — hope to attract larger conventions “that want something new and a little unusual and experiential.”

“Air lift is our biggest opportunity; we now have direct flights from 33 destinations, including New York and Miami and all the major cities in between, but you can’t fly direct to the West Coast. But, we’re talking to Los Angeles, Seattle and Orange County,” said Stacey Yates of the Louisville Convention & Visitors Bureau.

Urban Bourbon Trail is big draw
One big draw, for transient travelers, couples and friends’ weekends, bachelor and bachelorette parties, and groups, too, is the smashingly successful Urban Bourbon Trail. Started in 2009 with eight stops and boosted by a $5 million marketing budget, it has brought 45 establishments, each with 50 different big bourbons on their bar backs, to the city, and “put Louisville on the map,” Shepherd said. Thirty percent of all visitors to the city have come for a bourbon experience, and 10 bourbon distilleries have opened to offer tours and tastings and chances to bottle your own bourbon brew.

With the convention center opening in August, the Louisville Convention & Visitors Bureau is planning 15 fam trips for travel professionals and meeting planners interested in seeing what the city has to offer, she added.

Omni, meanwhile, has four more projects in the works. The hotelier said it will build on what it learned in Louisville about combining lifestyle and convention hotel elements, when it breaks ground on a 1,000-room hotel on the Boston waterfront in May; and another in Oklahoma City; and the brand is in talks about developing properties in Tempe and Fort Lauderdale.

The Europe brochure doubled in size from last year.

New bookings made in November will earn travel advisors a 20% commission.