Nearly two decades after Celebrity Cruises unveiled Celebrity Millennium, a ship that kicked off Celebrity’s four-ship Millennium-class, and ten years since launching the Solstice class, the cruise line has now, finally, followed it up, debuting Celebrity Edge in Port Canaveral this week.

Edge is set to “amplify Celebrity” while transforming “our brand but also the industry,” Celebrity President Lisa Lutoff-Perlo, who helped welcome the first guests on Edge alongside Royal Caribbean Cruises’ Chairman and CEO Richard Fain, told attendees on Edge this week.

Here are five highlights, all great selling points for travel advisors to pass along to their clients, from the new ship’s debut: 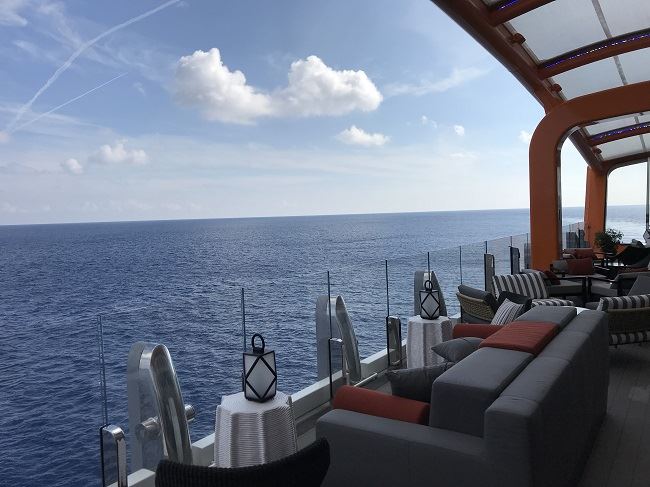 1. Magic Carpet
There are many impressive bells and whistles on Edge, along with a lot of firsts for Celebrity. But the feature that stands out the most, without a doubt, is the bright, tangerine Magic Carpet that hangs off the side of the ship, traveling up and down, from decks five to fifteen.

The 90-ton Magic Carpet, which is about the size of a tennis court, was originally built and designed as a way to enhance the tender experience. Guests would be able to travel up from a tender boat with the feeling off floating above the ocean. But Celebrity only tenders at ports about 25 percent of the time.

Holding 75 to 80 guests at any a time, the Magic Carpet has become so much more, offering maybe the most unique lounging experience at sea, while also serving as an extension of Deck 14’s pool deck.

Twice a sailing, Celebrity will offer Dinner on the Edge, where guests will be invited to eat dishes, at “action stations” positioned around the platform, inspired by the local region where Edge is sailing ($75 per person, the most expensive specialty restaurant on the ship). And there are plans, according to Brian Abel, senior vice president of hotel operations, to add a brunch option once per sailing that will cost $50 per person. 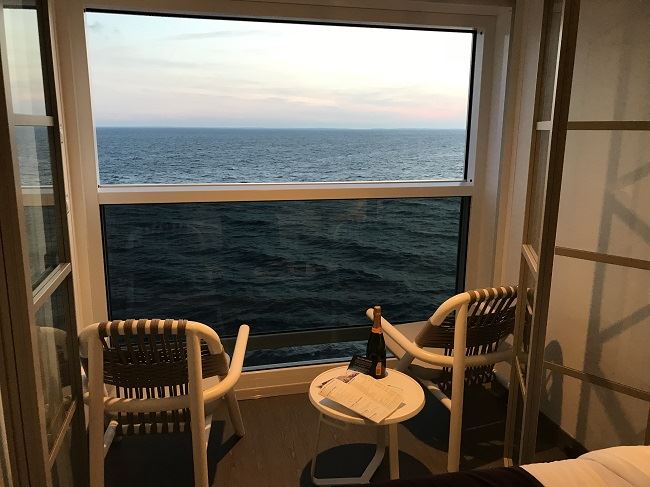 2. Infinite Verandah
Celebrity has never offered more stateroom options than it does on its new Edge. From a single-guest stateroom to a massive 1,800-square-foot Iconic Suite that sleeps 6, there are many different accommodations from which to enjoy a cruise.

One of the most impressive enhancements is what Celebrity has added to its standard staterooms on Edge: The Infinite Veranda.

Infinite Veranda staterooms are Celebrity’s take on the river cruise industry’s French balcony. They give guests the option, by simply pressing a button, to turn down half of their stateroom’s floor-to-ceiling window that looks out over the ocean, essentially creating a full-room verandah and giving guests 20 percent more living space.

The Infinite Veranda transforms the entire stateroom, and is “all about enhancing the guest experience,” according to Fain. “It is a part of the continuous improvement … a mantra of Celebrity, of what we can do better,” he said. 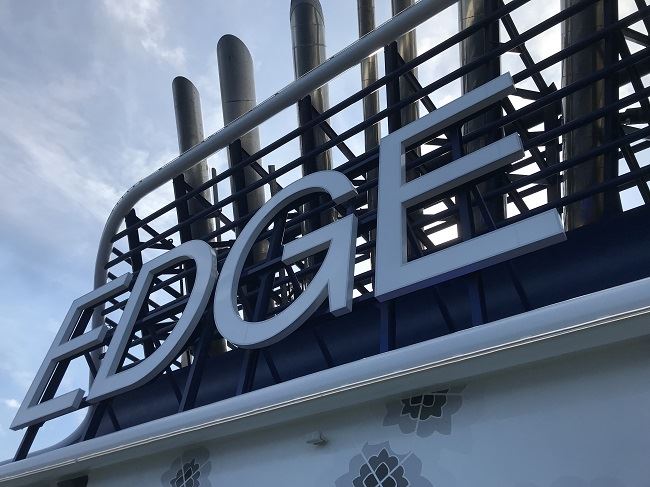 3. Expedited arrival
Edge is decked out in technology. Almost everything onboard, including changing the channel on the stateroom television or pulling down the blinds or booking shore excursion, can be done through Celebrity’s mobile app.

The app is designed to give guests a big boost before they ever get onboard, with expedited arrival, which Lutoff-Perlo called “the future of where we’re going.”

If guests complete all check-in forms before arriving at the cruise terminal, including taking a selfie through the app, the most they will have to do before boarding is to allow Celebrity staff to scan their Xpress pass, which has a barcode that identifies them. 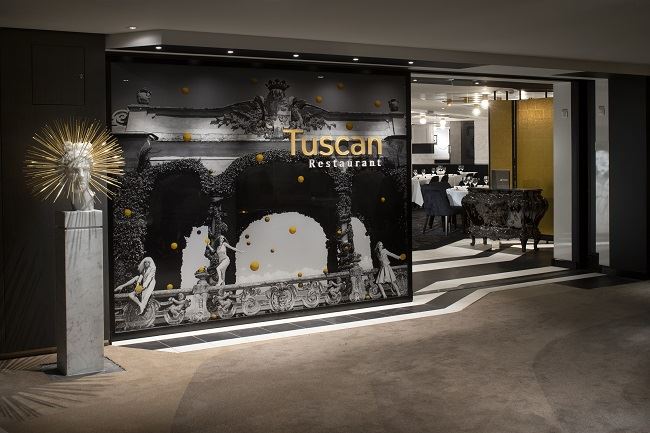 Tuscan is one of the four main dining rooms on Celebrity Edge. Photo: Celebrity.

4. Redesigned dining
There are 29 drink and dining venues onboard Edge, including four main dining rooms (all of which are complimentary) and nine specialty restaurants scattered around the ship. Aside from the food choices, Edge is giving more options than ever on how guests can dine.

Guests can choose traditional dining (early or late), where they will be placed in one of the main dining rooms and receive a menu of standards each night complimented by new specialty dishes. They can also choose to skip the traditional 6 p.m. or 8:30 p.m. dining slots and opt for Celebrity Select Plus.

Select Plus guests can choose any one of the four main restaurants each night of their sailing; they can make a new reservation on the app or opt for walk-in. Each restaurant is unique, inspired by a different region of the world.

The decision to add the flexibility was to made to “take advantage of all the great things we’ve been doing for years and to add to it,” Abel said. 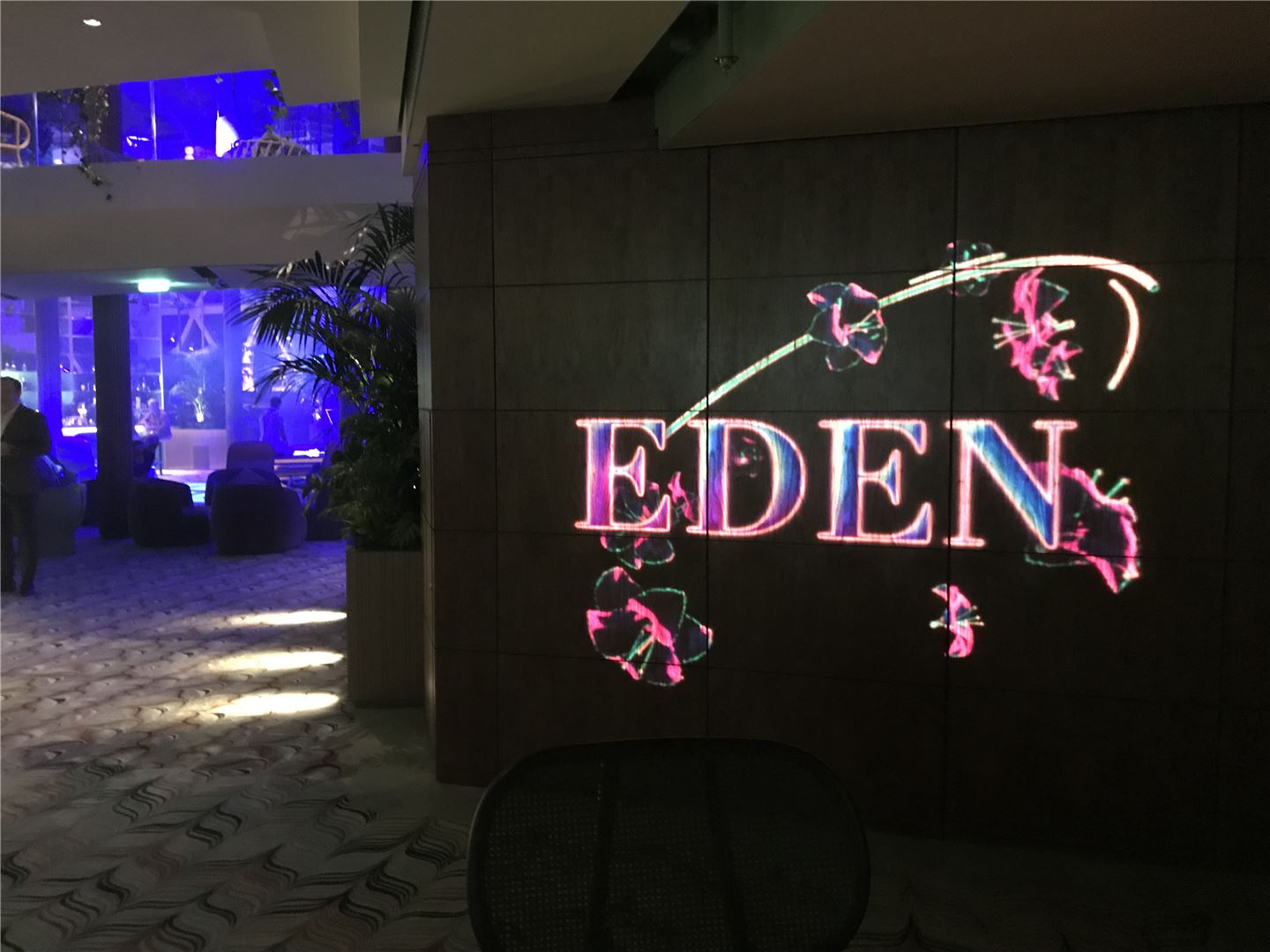 The entrance to Eden on Celebrity Edge.

5. Eden
Among Edge’s lounges and clubs, Eden is distinctive. Spanning three, glass-wrapped decks, Eden was designed by Wilson Butler Architects; it is part-restaurant lounge, part-nightclub, and part-theater. During the daytime, it feels like a greenhouse, but a night it twists itself into Eve at Eden, offering cocktails accompanied by performances by Edge’s onboard artists.

The space is also open for group business, from wedding receptions to business meetings.

The “Silver Anniversary at Sea” celebration will be available on all five Disney ships throughout the summer of 2023.

Travel Market Report team members reveal which new ship of 2023 has us the most pumped up.

The new VP will will lead MSC’s growing BDM and support teams as they double in size to accommodate the line’s ongoing North American expansion.

The cruise industry has seen three 'positive milestones' over the past month, according to a leading Wall Street analyst.