We started with a little ceviche and platanos to get into the Caribbean mood.

Then our group of international press got down to business touring Santo Domingo, the city of New World firsts – home of the first European settlement in the Americas, the first Colonial government, the first cathedral (begun in 1504), the first paved road. And yes, of course, the house where Christopher Columbus once lived.

For many visitors, Santo Domingo is the first stop on their trip to the Dominican Republic, a quick turnaround before they head to the beaches of Punta Cana or Puerto Plata. But for the more inquisitive traveler, the capital itself offers a beguiling mix of history, nightlife and world-class dining that is as appealing as the sun and surf.

Travel Market Report visited recently on a trip sponsored by three distinctly different Marriott properties there: the friendly Courtyard by Marriott, with its inviting outdoor pool; the sexy Renaissance Santo Domingo Jaragua Hotel & Casino, overlooking the sea; and the elegant downtown JW Marriott, with its rooftop bar, infinity pool and glass deck overlooking the city. At all of them, the point was the same: It’s worth spending a couple of days soaking up the culture before heading to a resort to soak up the sun. 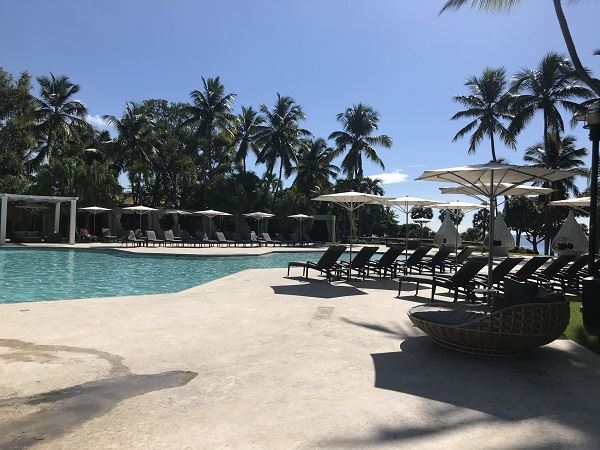 Indeed, the bustling capital offers a home base at many price points from which to take in the sights — and tastes — of the city, from ceviche and platanos at the Courtyard, to tapas and rum at the Renaissance, to steak and martinis at Winston’s Grill in the JW Marriott.

The luxury JW Marriott, above the high-end Blue Mall, is an elegant outpost with panoramic city views and a luxurious Presidential Suite that often houses sports and celebrity guests. In addition to Winston’s stately atmosphere, there’s a bustling lobby bar and the glass-floored Vertygo 101 Bar, on a terrace 101 feet above the city. For larger parties and groups, a private wing has five rooms and an exclusive executive lounge; plenty of meeting space; and a terraced ballroom that can host up to 600 guests.

The most unique of the properties, though, is the Renaissance Santo Domingo Jaragua Hotel & Casino, a 14-acre oasis in the heart of the city, that reopened in 2015 after a yearlong $40 million renovation. The hotel features 300 guest rooms and suites, and a beautiful sprawling outdoor pool overlooking the city, as well as a casino, an executive lounge, a tennis club, and a state-of-the-art fitness center. Like the hotel itself, the Zui spa (named for the Mother God of the Renaissance Jarauga chiefdom in pre-Colonial history) pays homage to the local culture and nature, offering “mystical therapies that harken back to the Taíno’s ancient natural methods.” There is more than 23,000 square feet of event space in 10 meeting rooms, including the La Fiesta theater, with seating for up to 1,200 guests.

Outside, meanwhile, El Capital also beckons. We walked the cobbled streets of the UNESCO-listed Zona Colonial, dating back to when this city was the capital of the Caribbean; we enjoyed the requisite tour and tasting at the Chocolate Museum; we dined on sushi and whole grilled pompano and crab cake in coconut sauce at the beautiful Laurel restaurant.

Then we headed to the water, for a seaside lunch at the sprawling Neptunos Club on Boca Chica beach, where you can take a quick dip in the waves or nap on a chaise lounge while waiting for your lobster risotto.

The real experts check in
Travel advisors, meanwhile, suggest that while most customers do not think of Santo Domingo when planning a vacation, it is an accessible and beautiful destination.

“Santo Domingo is a great historical city to visit, but most Americans aren’t aware or educated about it. So, when most clients think about the Dominican Republic, they think Punta Cana,” said W. Will Medina, owner of Destination Weddings Expert by Will Medina. That’s too bad, he added, “I had a great experience there and enjoyed fabulous dining options in the Colonial city.” 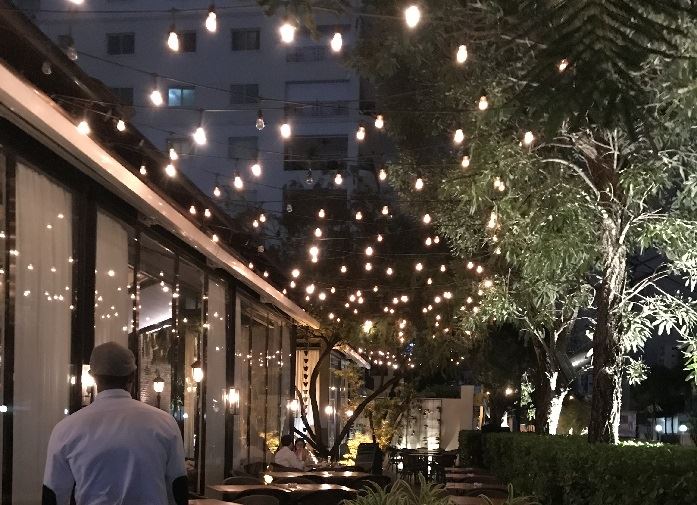 Leland Dale Davis at Explorer Travel and Tours also “really enjoyed Santo Domingo. The downtown area reminded me of Spain. Who knew a Caribbean Island had a subway system? I loved the downtown Colonial area; the food was great, with a mixture of Dominican/Cuban/Puerto Rican; and I was very impressed by the hospitality. I have sold quite a bit of Punta Cana, which is lovely, but I always suggest Santo Domingo as a feel of Barcelona without the jetlag. And definitely, if you are a baseball fan, this is a place to see some home-grown talent being developed.”

Sheila Michels, owner of Hometown Travels, said she enjoys “sitting at an outdoor cafe/restaurant and people-watching. I highly recommend clients opt for a personal day tour or build an overnight into their travels, especially if they have been to the Dominican Republic before, to explore the caves and the history.”

Tellie Peña, at Travel with Tellie in Atlanta, says the Renaissance Santo Domingo Jaragua Hotel is her “favorite place to stay in Santo Domingo.” And Donna Carlin, owner of Stepping Out Travel Services, agreed that “Santo Domingo should not be considered only for an excursion from the Punta Cana resorts! This Colonial city partially surrounded by stone walls is laden with cobblestone walks and Baroque architecture. Founded by Columbus, the UNESCO World Heritage Site is the oldest European settlement in the Americas — with the first castle, first cathedral; first monastery. I couldn't tell you what restaurant I liked more, because each had its own flare, though I did enjoy the Flamingo dancers and luncheon buffet directly across from Columbus castle.

“The famous Calde Street has cafes, restaurants and bars; and don’t miss Boca Chica beach and the national park, where you need to tour Los Tres Ojos (The Three Eyes), three limestone caverns with underground lakes, only 30 minutes from the airport.”