Royal Caribbean last week celebrated the start of construction of its forthcoming fifth Oasis Class ship, set to be delivered in 2021. The vessel is expected to debut as the world’s largest cruise ship at 228,081 gross tons.

The cruise line celebrated the steel-cutting milestone at the Chantiers de l’Atlantique shipyard in Saint-Nazaire, France. The ship will be the fifth of six planned Oasis class ships, and a sister ship to what is currently the world’s largest ship, Symphony of the Seas.

The not-yet-named ship will sail 5,518 guests in 2,759 staterooms. Its sister ships — Oasis of the Seas, Allure of the Sea, Harmony of the Seas, and Symphony of the Seas — are already the four largest cruise ships in the world.

While the cruise line has not released much about the new ship, it did say it will debut with its seven-neighborhood concept that Symphony also features. 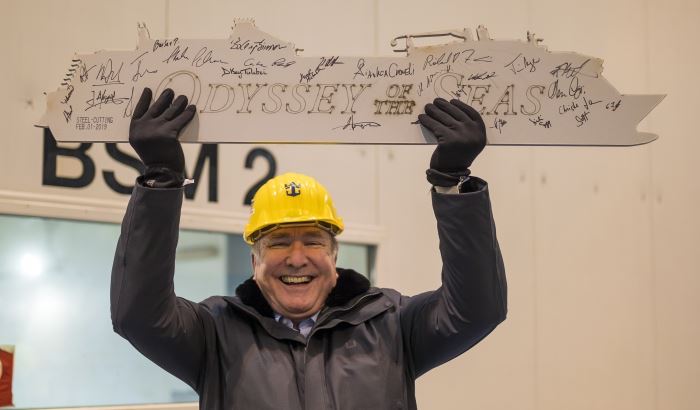 Richard Fain, Chairman and CEO, Royal Caribbean Cruises Ltd. was on hand to announce that the ship will be named Odyssey of the Seas and will debut fall 2020 and sail out of the United States.

Other Symphony features that could make their way onto the new ship include a 10-story waterslide, the tallest on any cruise ship, called the Ultimate Abyss; a revamped boardwalk area with a new bar, and candy and ice cream shop; Royal’s first New England-style seafood restaurant, with Hooked Seafood located in the ship’s Solarium; and a brand new original show, “Flight,” a satire of the history of the air travel industry.

After the ship’s debut, Royal Caribbean is expected to add one more Oasis class ship to its fleet. Earlier this year, the company announced it had signed an agreement with Chantiers de l’Atlantique shipbuilders to add a sixth Oasis-class ship in the Fall of 2023.