Southwest Airlines is partnering with Nintendo this year, and to celebrate the new alliance, the carrier is hosting a “Summer of Surprises” featuring the ultimate portable travel companion: The Nintendo Switch.

The partnership kicked off on Wednesday for customers on Southwest flight 2246 from Dallas to San Diego, a city that is hosting one of the biggest comic conventions this weekend. Customers were treated to a Nintendo-themed gaming flight as Southwest and Nintendo representatives onboard provided them with the opportunity to play a custom air travel-themed Super Mario Maker 2 course, called the Southwest Super Sky Challenge.

Each of the customers onboard the 737-700 aircraft was then awarded a Nintendo Switch system and a download code for the digital version of the Super Mario Maker 2 game. Known for its ability to play fun games at home and on the go, the Nintendo Switch system allows consumers to customize their gaming experiences and find their way to play. 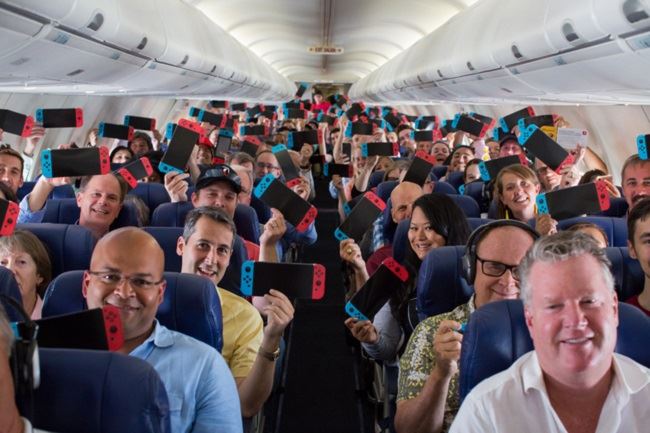 One lucky plane-full of Southwest passengers recieved a Nintendo Switch console and a free copy of Mario Maker 2 as part of the Airline's partnership with Nintendo and its "Summer of Surprises". Photo: Southwest Airlines

"With the help of Southwest, we brought smiles to an entire plane full of people," said Nick Chavez, Nintendo of America's senior vice president of sales and marketing. "We hope that spirit of fun lasts for a long time, as now everyone on the flight has a Nintendo Switch system and Super Mario Maker 2 to play at home or on their future travels."

Everyone onboard who played the game was entered for a chance to win a $500 Southwest gift card and a Nintendo Switch prize pack containing a Nintendo Switch system and a download code for a digital version of the Super Mario Maker 2 game, with one lucky winner being selected prior to the flight landing.

"Together, Southwest and Nintendo continue to elevate the ways in which we connect to our customers' passions, bringing families together over shared memories that will last," said Brandy King, director of communication & outreach, who oversees the airline's brand partnerships and entertainment public relations initiatives.

To enter the sweepstakes and view official rules, visit Southwest.com/Nintendo.

"We're excited to celebrate this summer by introducing our customers to a great travel companion sure to keep them entertained, while on a flight, on the road, or at home: Nintendo Switch," said King.

Lobasso will serve as the ticket agent representative on the subcommittee.

Consumers Want More Personalization When It Comes to Travel Planning