Royal Caribbean Cruise Line unveiled new details, this week, of Spectrum of the Seas, the 4,246-guest ship that is expected to start sailing from Shanghai in June 2019.

“The introduction of our highly anticipated Quantum Ultra Class will represent a quantum leap forward in ship design and experiences specifically tailored to Chinese guests,” Royal Caribbean President and CEO Michael Bayley said in a statement.

Starting in April 2019, the ship will sail a 51-night world cruise from Barcelona to Shanghai visiting 13 different countries. That sailing will be offered in five different segments. It will then arrive in Shanghai in June before repositioning to Hong Kong in winter 2019 to offer holiday sailings. 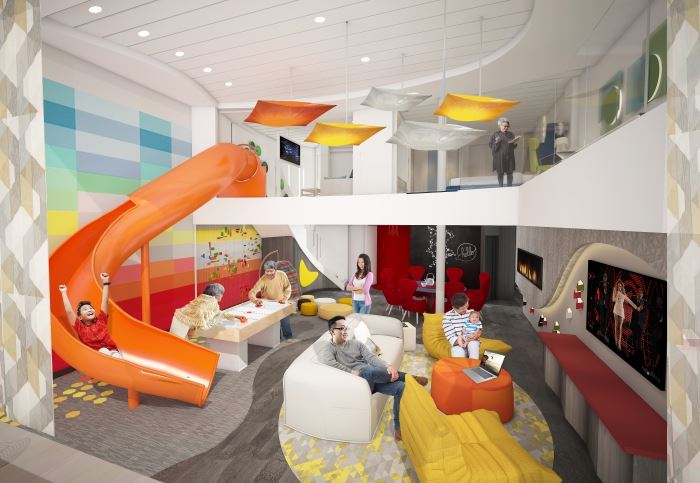 A rendering of the family suite on the upcoming Spectrum of the Seas. Photo: RCCL.

New private suite section
Spectrum will be the first Royal ship to get the brand’s new exclusive, suites-only area, a private enclave on decks 13 through 16 toward at the front of the ship.

The area will be available to guests staying in Golden and Silver suites onboard and will include special keycard access, and a private elevator, restaurant, and lounge.

The Balcony, an outdoor space that Royal said will offer “the best views on board,” and The Boutique, a private shopping area, will also be available only to those suite guests.

Family suites
Spectrum will also offer Royal’s family suite that first debuted on Symphony of Seas. The two-level suites will be able to accommodate 11 guests in three bedrooms, including a master bedroom that extends over the side of the ship. An in-suite slide will go from the top level to the bottom and a recreation room will give families the option of getting together to watch a movie, play video games, or sing karaoke. 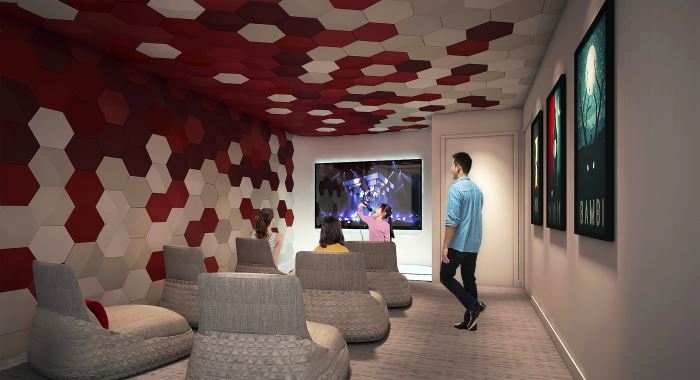 The entertainment room in the family suite. Photo: RCCL.

Sky Pad
Quantum will feature Sky Pad, which can be also found on Royal’s Mariner of the Seas and Independence of the Seas. Sky Pad is a one-of-a-kind experience that pairs bouncing on a bungee trampoline with virtual reality.

Guests will be able to don VR glasses to simulate bouncing on the moon and competing in intergalactic games. Those who don’t want a virtual reality experience can still bounce on Sky Pad, which will be located at the aft of Spectrum. 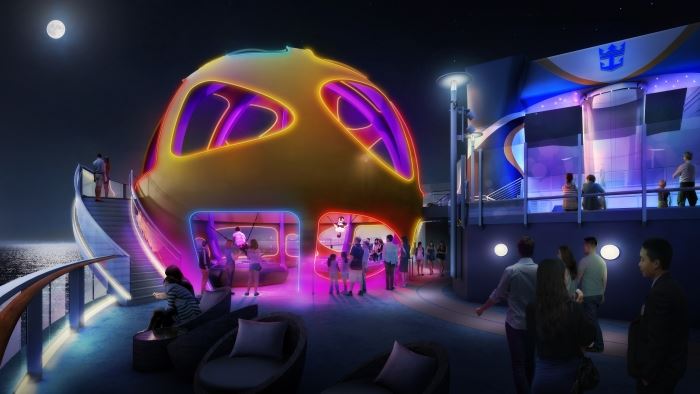 The ship's Sky Pad on its top deck. Photo: RCCL.

New dining options
Aside from a three-level main dining room that will be able to site 1,844 guests at one time, Spectrum will also feature Windjammer Marketplace, a brand staple. Spectrum’s Windjammer will be 20 percent larger than other Quantum Class ships and will offer both Chinese and Western dishes.

Brand new for Royal on Spectrum will be Leaf and Bean, a traditional tea room and café on the ship’s Esplanade that will offer Chinese teas, coffee, and Chinese and Western desserts and pastries.

Its top deck sports complex, SeaPlex, which features bumper cars, roller skating, and a basketball court, will be updated with augment reality walls and floors, giving another layer of interactive experiences for Spectrum guests.

The 378-guest Viking Polaris will spend its maiden season in 2022 sailing voyages to the Arctic and Antarctica.