Tour operator insightCuba has partnered with Putumayo, a major world music record label, to create a music-themed tour of Cuba. For music enthusiasts, Cuba! Cuba! could be the merging of some of the best possible worlds.

Three key ingredients
First, we have insightCuba, which has a legitimate claim to the phrase “market leader” in the highly specialized Cuba travel market. InsightCuba was one of the first, if not the very first tour operator, to offer people to people travel when it became legal for Americans in 2000.

Second, we have Putumayo, one of the most dynamically successful and innovative small business startups to come along in the music industry in a generation, and a bona fide expert on world music.

And third of course, and most importantly, is Cuba itself, a place that has a musical consciousness all its own, unmatched anywhere in the world. The music of Cuba is as richly unique and colorful as are its fantasy-world cars. There is no other place that has had Cuba’s peculiar history or its unique multicultural dynamic, and that has bred some of the most vibrant music on the planet.

Though Cuba is changing rapidly and the internet is seeping into the culture and creating the same kinds of volcanic changes as elsewhere in the world, the past 50 years has seen a Cuba that was largely cut off from the media universe we know so well in America, and which penetrates most places around the world.

In terms of electronic media, Cuba has been nearly silent during the last half century. And in addition, Cuba has been a poor country, without a lot of purchasing power for consumer goodies and pastimes. But music is free. Cubans have time, and the government provides universal education, which promotes music training. All of these factors converge to create the perfect musical storm, a gentle afternoon rainstorm that soothes the sensibilities.

The musicians in Cuba are astonishing. Cuba’s last half century of cultural isolation came after two centuries of a turbulent, multicultural history, in which European, African and Native American cultures blended together and sparked off each other and produced a soulful and diverse range of musical styles.

For insightCuba’s tours in partnership with Putumayo, Cuba’s rich music culture is a window into the larger cultural environment of Cuba.

Why Putumayo?
There is no one better to organize the ground operations than insightCuba, with its years of on-the-ground experience navigating Cuba’s highly unusual travel infrastructure, and no better musical authority than Putumayo.

Founded in 1993, Putumayo was a record company startup that flourished as the existing record industry, as dramatized by the fall of Tower Records, was collapsing. While the record labels blamed file sharing for their failure, Putumayo showed that it was still possible to be successful in the record industry. The company accomplished this feat by doing everything differently from the way things had been done previously in the music industry.

Founder Dan Storper was a storefront retailer. He had a clothing and handicraft store in New York City, and as he traveled the world to buy exotic stock for his store, he also gathered music from all the countries he visited. 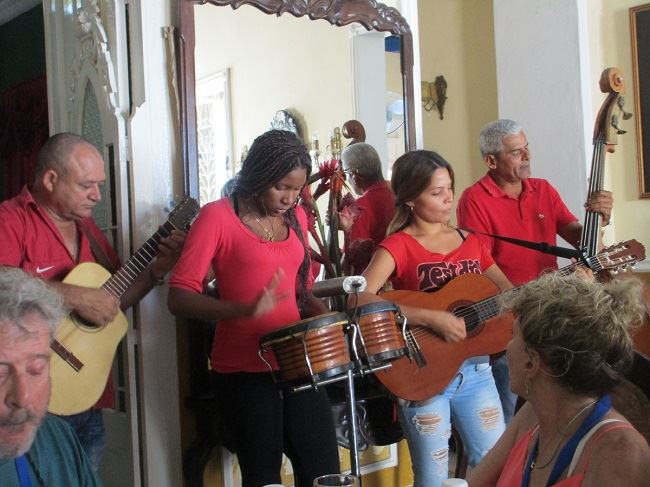 He started playing some of the world music he collected in his store, witnessed an enthusiastic reception from customers and staff, then started producing CDs and selling them in the store. He discovered the demand and delivered the product and Putumayo has prospered ever since. Storper bypassed the established record distribution channels and sold his CDs through attractive displays in retail shops and boutiques.

The CDs were packaged with original paintings on the cover, all done by British painter Nicola Heindl, in a colorful, naïve painting style that creates a unified look for the brand. Its customers buy the label, not the artist.

From clothing to ethnomusicology
As Putumayo Records grew, and Storper was still busy with his seven stores and designing new collections of clothes every year, he enlisted the support of Jacob Edgar, who became Putumayo’s musicologist. Edgar travels the world, seeking good new sounds, then brings them back to Storper to decide what will be on each final collection.

Edgar joined in 1998, and has since expanded his own work independently while still working with Putumayo. He started his own record label, Cumbancha; and hosts "Music Voyager," a music and travel television series for American Public Television and PBS. He has also worked in creating music-themed tours for National Geographic/Lindblad Expeditions. Jacob Edgar is the host or tour leader of the Cuba! Cuba! trip.

The transition from world music to travel was natural. According to Storper, “People were always writing in saying, ‘Why don’t you do music trips to other places? You are taking us on a journey through the CDs. We’d love to see these different countries through your eyes.’"

“So, when we started working on the "Cuba! Cuba!" album, I thought I’d reach out, and I found myself talking to Tom Popper. And he said, ‘Yeah, maybe we could to a music-based trip to Cuba with Putumayo. You’ve got a reputation of trust and we’ve been doing this for years.’ I certainly never wanted to tackle this on my own, so we decided to partner.”

The first insightCuba/Putumayo tour took place last year. After that, they decided to make it a series.

Cuban immersion via music
The insightCuba/Putumayo music tour of Cuba includes musical and dance performances, meetings with musicians, a visit to a recording studio, and a number of experiences that are not explicitly connected to music, such as a visit to Ernest Hemingway’s home and to three UNESCO World Heritage sites.

Music is the entry point to Cuban culture and it leads to a broader exposure to Cuban life.

“Music is the perfect gateway into a country or culture,” said Edgar. “It’s the type of universal expression that everyone can relate to and everyone can connect with and yet it’s also very local and personal, and really reflects so much about a culture. It reflects the language, the history, the identity, traditions, everyday life, you name it. Music is almost like a tool to get people to have a really insightful and deep experience with a place in a short period of time. Music is one of those few expressions that can facilitate that. That’s the goal of these trips."

But the tours are not only about music.

“They’re not just for music heads,” said Edgar. “They’re for people who enjoy music, but music brings them into the food and the people and the history and all of that stuff. It’s such a great way, if you know how to use the music right and not just use it as tourist entertainment. It’s more than entertainment. It’s deeper than that.”

Beyond Cuba
The insightCuba/Putumayo partnership already has music tours in the works for New Orleans and Peru via insightCuba’s international division Masala Expeditions.

With the Cuba travel market being a political football constantly subject to changing political winds, being a specialist of Cuba could be considered a dangerous occupation. InsightCuba, which had built its reputation as one of the foremost experts on travel to Cuba, could not rationally pursue a strategy that presumed stability in the Cuba travel market.

So, the company diversified and, last spring, unveiled a new division called Masala Expeditions, which applies to other destinations what insightCuba has learned about immersive travel from operating people to people tours in Cuba. The company debuted with programs for Japan, Iran, China’s Yangtze River; Bhutan, Tibet and Nepal; Peru and Machu Picchu; South Africa, Kenya and Tanzania and Iceland.

Now with insightCuba’s new partnership with Putumayo, two new music tours will be added to the Masala lineup: New Orleans and Peru.

insightCuba’s Cuba trip in partnership with Putumayo Records is a six- or eight-night package that includes time Havana, Trinidad and Cienfuegos. It will depart Nov. 9 and return on Nov. 14 or 16. More info on the itinerary here.