When Hard Rock International Chairman Jim Allen had the idea for a hotel that was shaped in a large-scale version of a guitar over a decade ago, “everyone thought we were a little bit crazy,” he said during a press briefing Tuesday at the Hard Rock Café in Times Square.

That vision has now become a reality in Hollywood, Florida. Standing at 450 feet tall, the project is the first of its kind.

It is part of a $2.2 billion expansion to the Seminole Hard Rock properties in Tampa and Hollywood, both opening this fall.

“We run at 98% occupancy, since the day we opened back in 2004, at both of these properties,” Allen said, allowing the team to take its time with the upgrades in order to make it stand out on a global scale.

Working with DeSimone Consulting Engineers, the guitar-shaped hotel, complete with guitar faces and brightly lit strings, will add 638 guestrooms and suites to the Seminole Hard Rock Hotel & Casino Hollywood. With entry-level standard rooms starting at 515 square feet, “we really made a commitment at the entry level product,” Allen said. There will also now be swim-up suites in the 168-room Oasis Tower.

Beyond its impressive guitar architecture, there are several other new stand-out features. At the floor-to-ceiling water structure dubbed “Oculus,” a water show with projections will take place alongside music. 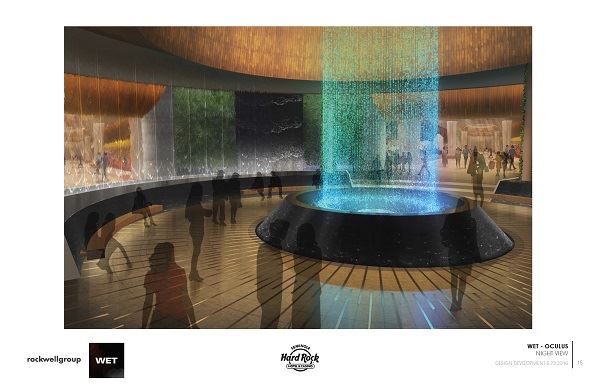 The Oculus will encompass sound, light, water and choreography.

The pool lagoon was inspired by Bora Bora, including individual tikis. Overlooking this area will be a new day club and nightclub, aimed at rivaling those in Las Vegas. There is also a man-made lake that will offer water activities, including paddle boarding and canoeing.

At the core of the Hard Rock brand is music, so it is fitting the company spent $125 million to upgrade the property’s Hard Rock Live. The 6,500-seat venue was renovated to be able to host nationally televised awards shows and A-list acts. With clam-shell seating, the furthest seat from center mic is only 164 feet away. Allen added, “It’s unheard of, there truly isn’t a bad seat in the house.” He also revealed that Hard Rock has entered into a residency relationship with Andrea Bocelli through February; and the brand has a larger goal of hosting 100 shows a year with major acts.

Allen said that the property will focus on its meetings and group business, with over 150,000 square feet of meeting space, where “we want to look at the opportunities to grow our business here.” A new 38,000-square-foot exhibition hall can host trade shows and other large conventions. Adjacent to this space is a pre-function area and chandeliered ballrooms. 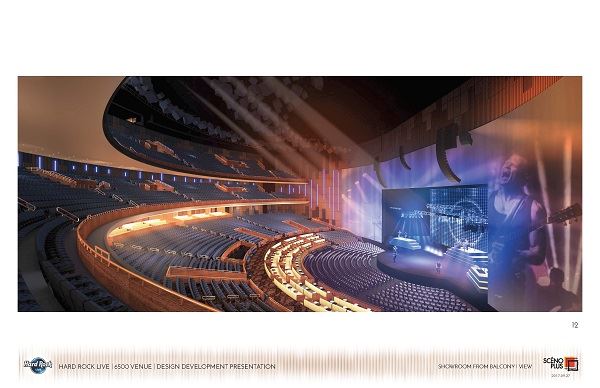 Maroon 5 will open the Hard Rock Live with a concert on Oct. 25.

The expanded spa has dry and wet lounges, dipping pools, saunas, 21 treatment rooms and three 800-square-foot treatment suites, a salon, and fitness center. There will also be 40,000 square feet of retail space, with the ability to double.

The Hollywood grand opening is Oct. 24, with bookings opening on July 24. The Hard Rock Live venue will open on Oct. 25 with a grand opening concert by Maroon 5. 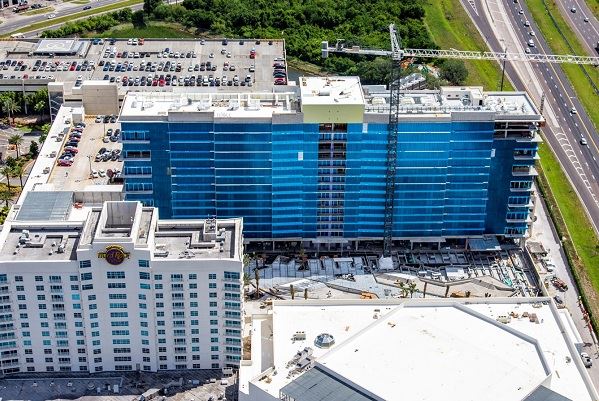 Progess is underway at the Tampa property.

Upon entering the hotel, guests will be greeted by Elvis’ 1928 Kimball grand piano (plated in 24-karat gold leaf) on display for the first time in the lobby. Hard Rock International acquired the piano in 2015 as its 8,000th piece of memorabilia.

Three new pools include a private pool, one for adults only, and one geared towards families. The 60,000-square-foot expanded pool and deck area will feature 20 cabanas, 600 loungers and daybeds, and two DJ booths.

The property also added three new eateries, including an Italian fine dining restaurant, 1,000 slots and 41 table games in the casino, 13 treatment rooms in the expanded spa, and a Hard Rock Live venue.

Bookings for the Tampa property open on June 5.