Riding into the colossal canyons of Zion National Park, Charlie Watson, the tour director on Tauck’s “Spirit of the Desert” tour, played the soundtrack of the film “Jurassic World” on the in-coach sound system. The soaring melody did what movie soundtrack music does so well, opening channels of emotion and heightening the experience of seeing the majestic, towering cliffs in the canyon named for The Promised Land.

It was one of many cinematic elements in a tour that is part of the series of Tauck’s Ken Burns American Journeys, produced by a partnership between Tauck’s product development team and the filmmaking team of Ken Burns and Dayton Duncan. The tours incorporate the art of movie-making into the travel experience, creating a unique synergistic kind of product that is a hybrid of both tour operation and film.

On the drive between Bryce Canyon National Park and Zion National Park, the tour director had played a film featuring filmmakers Ken Burns and Dayton Duncan providing a short introduction to Zion, and sharing some of their inspiration about that park. It was one of about 150 10-minute film vignettes that feature interviews with the filmmaking team created specifically for the Ken Burns American Journeys series.

The first film showing of the trip was on opening night at a meet-and-greet reception. The film provided a general introduction to the national parks, and an explanation of why Burns and Duncan believe that the national parks are the best idea to ever come out of America.

Other film vignettes were played at other moments in the trip corresponding to other places that were visited on the journey.

The inclusion of Las Vegas after visiting several of the most revered national parks is reminiscent of the Sesame Street routine “One of these things is not like the others.” But a final night in Vegas is included as a way to close out the tour with a farewell dinner and place everyone in a comfortable hotel near an international airport, McCarran International, which is well connected to the world air travel network.

The tour starts at Grand Junction, Colorado, which is a little more than an hour’s flight from Denver International.

Besides the national parks, the tour includes visits to a variety of other sites and points of interest, and includes a generous allotment of free time and a full selection of activities with which to fill up the free time.

The itinerary also includes two flightseeing experiences in small aircraft, one over the Grand Canyon and Hoover Dam and the other over Capitol Reef National Park; and a river rafting experience on the Colorado River. 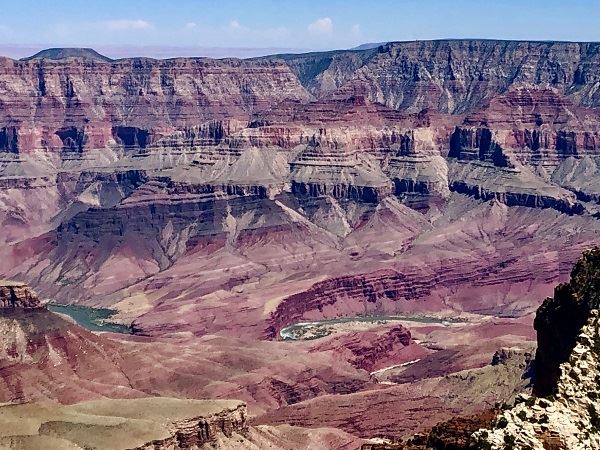 Hybrid form
The marriage of Tauck’s tour operation with historical filmmaking is innovative and pretty much in a class by itself, though it does follow trends in the marketplace to meet the demand for more authentic and in-depth experiences. And merging Tauck with filmmaking is not as great a leap as it may seem at first glance.

Tauck has historically referred to its tours as being “choreographed.” The itineraries are not just a series of stops along a route on a map, but rather a program of experiences carefully orchestrated for maximum effect.

In this tour, the itinerary has a sort of meta-function with its connection to the book and film series, “The National Parks: America’s Best Idea.”

The title itself makes a tall claim, but Burns and Duncan make the case convincingly even in the short film vignettes created exclusively for these tours. The tour is designed to seal the deal and convince participants of the truth of their claim. It sets the tone for the program that was about to unfold.

Burns and Duncan, who worked together on several documentary films that celebrate American history, such as “The Civil War,” “Mark Twain,” and “Jazz,” are confirmed Americaphiles. They speak with authority and make their case convincingly.

The team is not alone in their reverence for the Declaration of Independence and its importance in shaping the destiny of humankind. The document laid the foundation for the first democratic republic, a government based on rule by and for the people. The claim that the National Parks were the best idea of America is a little more daring of a claim.

Burns and Duncan argue that after the republic was established, the national parks were the best idea to come out of the country because it translated the idea of democracy into the land itself. For the first time in history, they say, the most beautiful places in the world were set aside not only for kings and the very rich, but for all people.

Having that idea implanted into the minds of the travelers at the start of the trip sets the tone for the experience of visiting the parks.

The Tauck-Burns partnership
The Tauck-Burns partnership has several levels of collaboration. Ken Burns and his historian/writer partner Dayton Duncan worked with Tauck product developers to create the itineraries. They also created a series of more than 100 short film vignettes to go with the various trips. They are played either on the coach while traveling between destinations or in meeting rooms at the hotels where the guests are stationed. The films enhance the experience and make it a sort of combined travel-media experience.

The partnership has also produced a series of events based on Ken Burns films, including a Jazz event in New Orleans based on the “Jazz” documentary series; a Civil War event in Washington, D.C., based on “The Civil War” series; and a Chicago event that ties into the three Burns films of “Prohibition,” “Jazz,” and “Frank Lloyd Wright.”

The events are like stationary tours, using Tauck’s 90-plus years of institutional experience orchestrating travel experiences, but based in a central location and exploring on the basis of a particular theme. The Tauck Ken Burns events are created in collaboration with Ken Burns and writers he has worked with on his films, including Dayton Duncan.

Shared appreciation
The tour created by Tauck in collaboration with the Burns-Dayton team does a good job of proving the point set forth in the book and film series, and the participants on the tour seem to get it. Other visitors from around the world seem also to get it, and the national parks seem to inspire a quieter, more respectful kind of tourism than at some other tourist destinations.

The national parks should be on everyone’s bucket list, and the “Spirit of the Desert” tour offers a uniquely enriched way of having the national park experience at some of the most stunning places in America.