This has been a banner year for Canada. To start, it’s the nation’s 150th anniversary, as well as Montreal’s 375th anniversary; plus the New York Times named the entire country the No. 1 place to visit in 2017. On top of the annual events that keep our northern neighbors in good spirits all year long, the sesquicentennial brings special festivals, concerts, public art installations, free entry to all national parks, and more.

But can Canada’s hotels handle the increase in tourist traffic? Luckily, new and renovated properties have recently opened or will soon open in cities from coast to coast. Here is a rundown of what’s new in Canadian lodging.

Hyatt Place, Edmonton, Alberta
Officially opened in January 2017, the new Hyatt Place introduces a sleek, 13-story accommodation for downtown Edmonton. Itis the first of the Hyatt’s business-oriented brand to open in Canada, bringing 258 spacious rooms that each measure from about 400 to 1,000 feet. Aiming to accommodate business travelers with reasonable rates, it offers free Wi-Fi, complimentary hot breakfast, 13,000 square feet of meeting space, and a market and bar. Designed by Edmonton architect Gene Dub, the new hotel will add a sleek, modern high-rise silhouette to the local skyline.

Crash Hotel, Edmonton, Alberta
Edmonton is showing off its handsome, boutique side with the new Crash Hotel, opened last New Year’s Eve. Located downtown across the street from the Rogers Place arena, Crash is a boutique conversion of a hotel first opened in 1904. The new property features 71 affordable rooms and suites all uniquely designed, some with themes like the “HiFi” room, featuring a wall of vintage speakers. They also appeal to younger travelers with the option for hostel-style bunk-bed rooms with shared bathrooms, and “night owl” rooms located above the hotel’s hip Denizen Hall pub.

Fairmont The Queen Elizabeth, Montreal, Quebec
Following a $140 million full-scale renovation, downtown Montreal’s Fairmont The Queen Elizabeth reopened in June 2017. Transformation of about 500 of the hotel’s 950 guestrooms were renovated in time for spring (with completion of the rest expected by the year’s end), along with redone common areas, a “business campus” with the option to connect several meeting rooms, a new on-site market, and new restaurant, bar, and coffee lounge.

Le Mount Stephen, Montreal, Quebec
A new Leading Hotels of the World property opened in summer 2017 in downtown Montreal. Housed in an early 20th-century social club’s historic neoclassical building, Le Mount Stephen operates 90 contemporary rooms, including “sky lofts” in the adjoining tower — all with floor-to-ceiling windows. The new hotel is home to three banquet halls that can accommodate up to 500 guests, along with restaurant Bar George, two cocktail lounges, and urban MBiospa.

Le Village des Écluses (The Village by the Locks), Montreal, Quebec
For truly uncommon accommodations, travelers can book at Montreal’s new Village by the Locks (Le Village des Écluses) complex, opened in May of this year. The “village” consists of 70 classic wooden boats, eight “oTENTik” tent-cabin rooms, and one wooden cottage outfitted like a small apartment. Located on the southern edge of Vieux Montreal, water-loving travelers and families will appreciate the unusual experience, and enjoy the picturesque, natural setting along the waterfront Locks Gardens.

JW Marriott Parq Vancouver, Vancouver, British Columbia
The new Parq Vancouver is a LEED gold-certified complex opened this fall in Yaletown, at the south end of downtown Vancouver on False Creek. The massive project features 329 guestrooms and suites by JW Marriott, the first property for the luxury-boutique hotel brand in Western Canada. The new high-rise hotel will attract travelers who prefer modern architecture, plus harbor views, a new spa, six restaurant and lounges (including a private club lounge); and proximity to Gastown, Robson Street, and the city’s vibrant entertainment district. 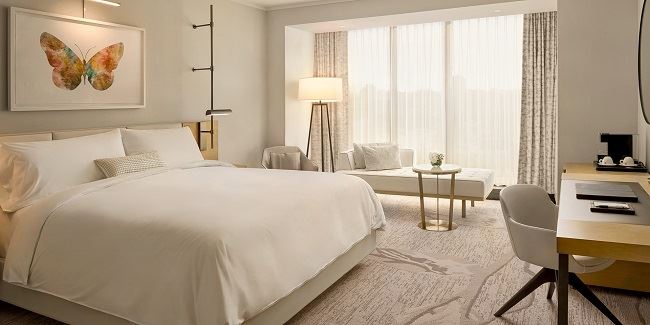 The Douglas, Vancouver, British Columbia
Also inside the new Parq Vancouver is the Douglas, a member of Marriott’s high-end Autograph Hotel Collection. Like the adjoining JW Marriott — which connects via a 30,000-square-foot elevated park — the Douglas offers handsome interior design in an ultra-modern building, which also houses a casino, meeting rooms, and event spaces. As of fall 2017, the Douglas offers 188 luxury guestrooms. And along with the multiple eateries inside the JW Marriott, the Douglas’ restaurants are being developed by James Beard – nominated restaurateur, Elizabeth Blau; and her husband, award-winning chef Kim Canteenwalla. 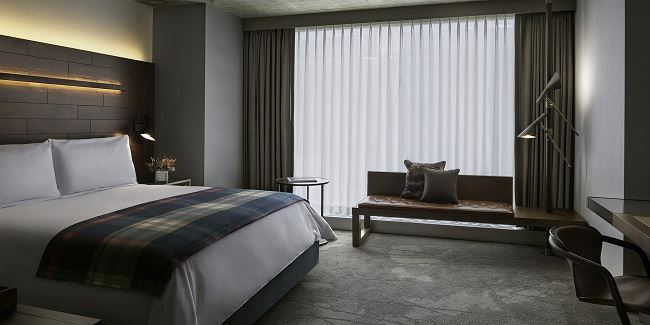 Alt Hotel, St. John’s, Newfoundland
The newest of the Group Germain Alt Hotel properties opened in fall 2017 in the Newfoundland and Labrador provincial capital of St. John’s. The four-story hotel overlooks the harbor, and is situated near the convention center, Signal Hill, and the George Street commercial area. The eco-friendly hotel offers 148 affordable, stylish-yet-simple rooms, plus a fitness center, small market, and meeting spaces.

Fairmont Empress, Victoria, British Columbia
Spring 2017 brings the unveiling of a $40 million restoration of the landmark Victoria Fairmont Empress hotel. The 1908 Edwardian-style building saw all 235 of its guestrooms updated with modern details, as well as improvements to the Q at the Empress restaurant, Q Bar, and the hotel’s grand Lobby Lounge — home to famous daily Tea at the Empress service. The Willow Stream Spa also was refreshed as part of the project, as were the hotel pool, health club, and meeting spaces.

Lawrence (Larry) M. Cuculic, a 12-year BWH veteran, has been appointed as its new president and CEO.

The all-inclusive space is getting another player.

From humble beginnings in South Africa, Tollman grew the company to an international travel group encompassing more than 40 brands.

Video: How Has COVID-19 Impacted Destination Weddings and Honeymoons?
About Travel Market Report Mission Editorial Staff Advisory Board Advertise
TMR Resources Webinars Calendar of Events
Subscribe to TMR
Select Language
Do You Have an Idea Email
editor@travelmarketreport.com
Give Us a Call
1-(516) 730-3097
Drop Us a Note
Travel Market Report