With the final deadline for the REAL ID Act coming up, travelers everywhere will soon be impacted by new rules for flying domestically at every airport in the U.S., as the Transportation Security Administration (TSA) will soon stop accepting standard driver’s license or ID cards at airport security checkpoints.

Here’s what travelers and advisors need to know about what the REAL ID Act will do and how they can get compliant before the final Oct. 21, 2020, deadline.

What is the REAL ID Act?
Among other things, the REAL ID Act, which was passed in May of 2005 after a recommendation from the 9/11 Commission, set requirements and standards for state driver’s licenses and ID cards to be accepted at federal facilities and at airport security checkpoints.

According to the Department of Homeland Security (DHS), the Act was aimed at improving the security of driver’s licenses in all 50 states. While previously it had been up to individual states to determine what the rules and criteria would be for issuing a driver’s license or an ID, the REAL ID Act would nationalize the rules and set a federal standard that states would be forced to meet.

When will I be impacted?
The DHS originally planned on Jan. 22, 2018, as the deadline. The official rollout was then pushed back to Oct. 1, 2020, after some delays. Starting then, the DHS and TSA will only accept REAL ID-compliant IDs and licenses; otherwise, travelers will be required to have a passport when flying domestically. 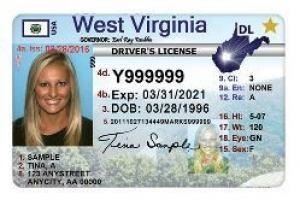 An example of a REAL ID-compliant license in West Virginia. Photo: TSA

How do I know if my state is compliant?
Right now, in total, there are seven states left to meet the requirements to be compliant with the REAL ID Act: Oregon, Oklahoma, Kentucky, Pennsylvania, New Jersey, Maine, and Rhode Island. California is currently under review and is expected to be compliant by the end of May 2019.

Those non-compliant states are all currently operating with extensions, meaning that the current driver’s licenses and ID cards are still accepted at security checkpoints despite not being compliant with the Real ID Act. Pennsylvania and Kentucky have extensions until Aug. 1; while Maine, New Jersey, Oregon, Oklahoma, and Rhode Island have extensions until Oct. 10.

The rest of the U.S. states are all currently compliant and are issuing REAL IDs. As long as a traveler has a license issued with the REAL ID requirements (usually designated by a star in the upper portion of the ID), he or she is able to travel domestically without a passport or another form of ID.

How do I get compliant?
Each state will have to follow the new federal requirements for issuing IDs. Travelers can check with their state’s DMV to understand exactly what they’ll need before heading to the DMV to get an updated license.

New York, for instance, began issuing REAL IDs in October 2017. The state now requires all travelers to get a REAL ID by going to the DMV with proof of ID, proof of social security number, date of birth, and U.S. citizenship, along with two different proofs of New York State residence.

What is the TSA doing?
The TSA most recently launched an awareness campaign to make sure everyone knows about the upcoming REAL ID deadline. Travelers will begin seeing new signs at airports nationwide in the coming weeks to remind them that REAL ID-compliant licenses or other acceptable forms of ID — such as a valid passport, federal government PIV card, or U.S. military ID — will be mandatory for air travel as of Oct. 1, 2020.

Got a client interested in Expedition Cruising? You don’t know where to start? First off, you will need to inform yourself of the various expedition cruise offerings and know how to get your client qualified and placed on the right offering. You will also need to know how to explain the difference between a small ship expedition and a larger ship cruise. Overwhelmed? Don’t worry, we have an expert.

Video: Has the Post-Pandemic Travel Boom Run Out?

Has the post-COVID boom come to an end?

January 26th at 1pm TMR MasterAdvisor Session: How to Best Deal with a Client's Travel Disruptions

Disaster strikes—a flight is canceled and a traveler is stuck at the airport with no way to get home, or no way to make it to their destination.

Luxury doesn’t always mean what you think it means.